The Daily Nexus
The Daily Stench
Heroic Bike Crash Bystander Isn’t Going To Stop and Help, But Hopes Everyone is OK
January 23, 2020 at 4:20 pm by Kian Karamdashti 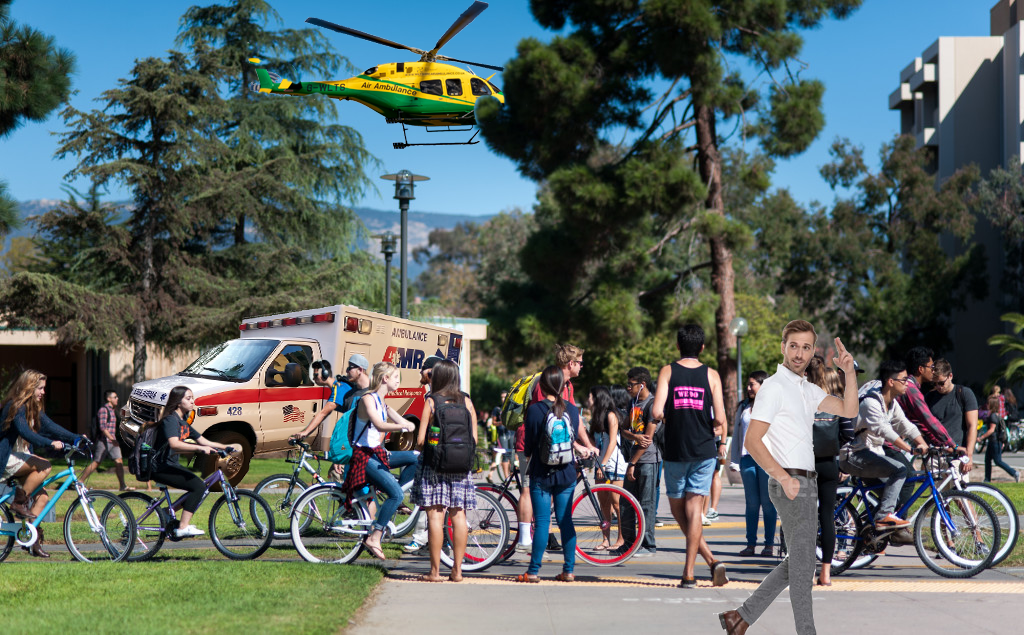 Local outstanding citizen Randy Fygel is being hailed as a “local hero” after his actions today following a 27-bike pileup at the bike intersection by the Isla Vista Police station.

According to witnesses at the scene, Fygel was present when a reckless biker ran through the yield sign into oncoming traffic, instigating the massive cycling disaster in the middle of Ocean Road. Instead of aiding those in need, however, Fygel simply yelled out an obligatory “Oh shit, are y’all good?” before continuing to jet onto campus without slowing down.

“I know he didn’t stop or anything, but you can tell by the way he turned his head before continuing on his bike ride, that he was really concerned for everyone there,” local biker Lolita Vega said. “It really meant a lot to everyone there that he acknowledged the accident and had it in his thoughts as he swiftly biked away from the scene.”

One student involved in the wreck bemoaned the lack of help from bystanders, but it’s important to note that the accident occurred at 10:50 a.m. — otherwise known as peak rush hour — and a perfectly acceptable reason for a man of Fygel’s great character to abstain from actions greater than a hurried condolence.

“Oh no I didn’t even have class. I just was just mad hungover and really wanted Jamba Juice and Panda Express from the UCen.” Fygel said. “Like, I really do hope everyone was okay, but that Strawberry Surf Rider and Orange Chicken Plate was calling my name.”

Fygel’s hopes and prayers to those involved did not go unnoticed by University Administration, who will be holding an impromptu medal ceremony for Fygel in Campbell Hall this Friday at 7 p.m. Tickets have already sold out for the event, as Fygel’s admirers are clamoring to see their salubrious hero. Rumor has it the president himself has plans to bestow the highest possible civilian honor upon the well-wishing bystander.

“People standing by, wishing well, and doing nothing are the backbone of this country and are what the government is all about,” President Donald Trump said. “What he did was totally huge of him and I even think he deserves a medal of honor.”

What’s next for Fygel? The world is his oyster, and he’s scheduled with an appearance on “Ellen” next week.

Kian Karamdashti fell off his bike before his Isla Vista theater 8 a.m. to a staring, emotionless crowd of onlookers during his freshman year. He thinks about that a lot.