The Daily Nexus
Opinion
Behind the Bombs: Exposing Our University’s Relationship with Nuclear Weapons
January 23, 2020 at 8:00 am by Carley Weiler

If I told you that on a system-wide level, the University of California helped design weapons that have killed over 200,000 people, would you believe it? 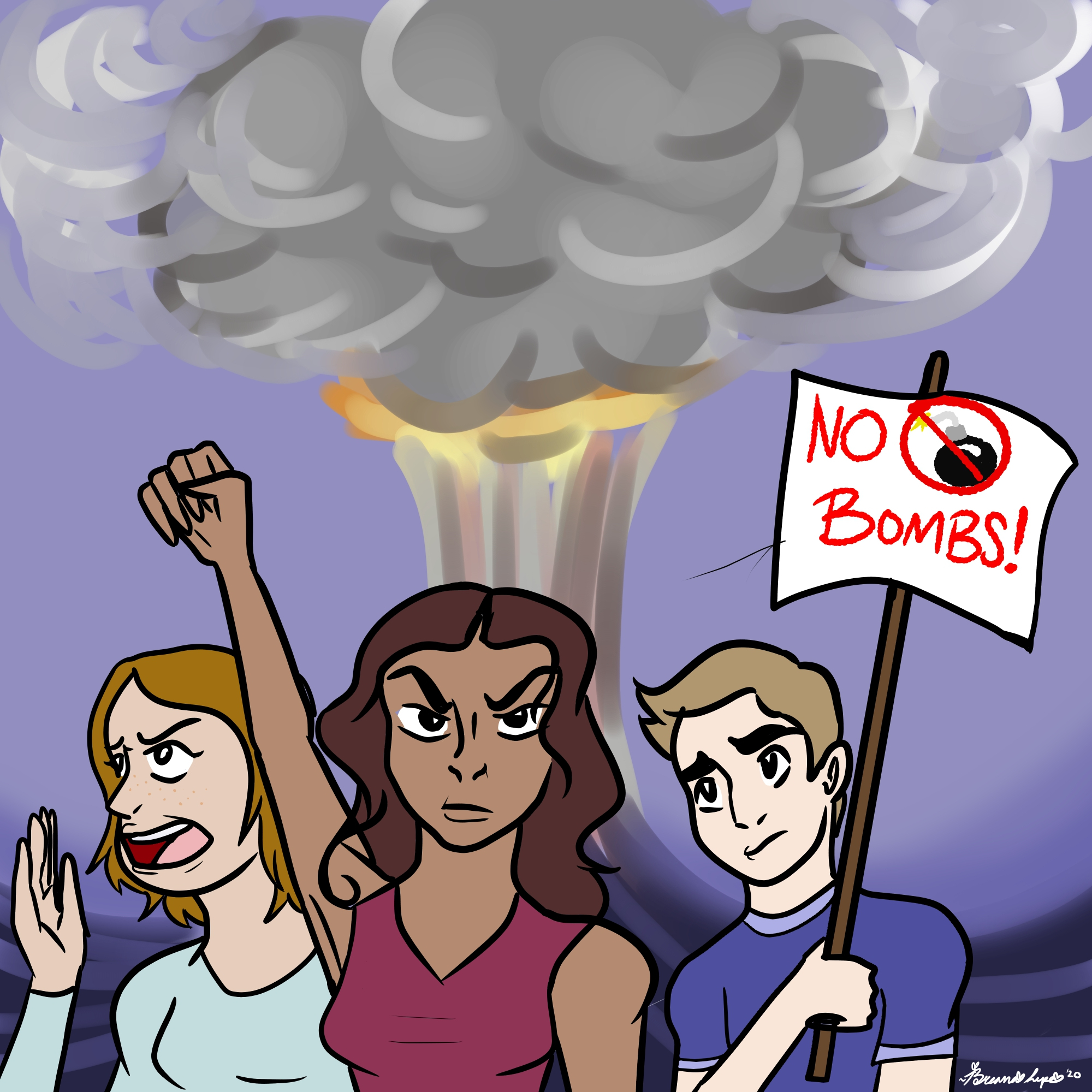 The University of California is considered one of the top university systems, boasting some of the brightest students and professors in the nation. It is hard to fathom how an institution that is held in such high esteem could be involved with anything but progressive initiatives. The UC Office of the President’s web page includes a mission to create solutions to the urgent social and ecological issues affecting our society. In many ways, students fulfill this mission every day. If you walk through UCSB’s campus, you will be surrounded by students advocating to save the bees, campaining for sexual assault prevention and organizing for climate change awareness. It is extraordinary that so many students engage in altruistic action, despite the countless personal anxieties that most college students endure.

While universities under the UC system offer a safe and open space for student activism, this does not mean that the university reflect the actions of its students. For example, UC Santa Barbara’s mascot, which appropriates the Argentinian Gaucho, is a decision made by the school, not the students. Despite some outdated practices that continue to endure under the UC system, students across the nine campuses have historically been at the forefront of progressive policy changes.

However, a deeper look into the UC’s off-campus affairs reveals cracks in the ethical, forward-thinking exterior that the institution so proudly projects.

During the early stages of World War II, President Roosevelt called upon the country’s top universities to help research and develop the world’s first atomic bomb, naming it the Manhattan Project. Many universities responded to the call and helped the success of the project by building the world’s first nuclear weapons. The University of California proclaimed their involvement a “service to the nation.”

The Manhattan Project resulted in complete devastation when the United States dropped two of its nuclear weapons on the Japanese cities of Hiroshima and Nagasaki in 1945. Eighty thousand people were instantly killed in Hiroshima and thousands more died soon after from radiation exposure. Three days after this tragedy, another bomb was dropped over Nagasaki, killing approximately 40,000 people, most of whom were innocent civilians. The mass murders of the people of Hiroshima and Nagsaki are the only events in history in which nuclear weapons have been deployed.

The University of California’s decades of involvement in the development of nuclear weapons indicates that our university leaders are willing to sacrifice morality for power and profit.

Since its inception, the UC has partnered with the laboratory where the weapons from the Hiroshima and Nagasaki bombings were developed, meaning that not only was the world’s first atomic bomb built under the consciousness of the UC system, but also that the institution was integral in its creation. The Nagasaki and Hiroshima bombings should have immediately ended any association between nuclear weapons and university resources. However, the everlasting prioritization of profit and power over humanity has led the UC to engage in the ongoing research and development of weapons of mass destruction.

The ongoing development of nuclear weapons is not exactly shocking, considering the avenues through which the United States accrued its power and economic prosperity (*cough cough* mass genocide and slavery); however, it may come as a surprise that the UC system, along with about 50 other universities, is still intimately involved in the research and design of nuclear weapons today. According to the International Campaign to Abolish Nuclear Weapons report (ICAN), the University of California estimated that for the fiscal year of 2019, it would receive around $22 million in total net fee revenue for co-managing two of the biggest nuclear weapon laboratories.

The University of California’s decades of involvement in the development of nuclear weapons indicates that our university leaders are willing to sacrifice morality for power and profit. The two nuclear weapons laboratories that the UC manages, the Lawrence Livermore National Laboratory and the Los Alamos National Laboratory are hidden from view and overlooked by the public. Unbeknownst to most students, the UC’s association with nuclear weapon laboratories generates billions of dollars in funding which is predominantly put back into nuclear weapons research. While unfathomable amounts of money are poured into the funding of the research and design of the nation’s nuclear arsenal, services that are vital for the well-being of students, like healthcare, financial aid and housing assistance, receive much less support.

After speaking to several students about the University of California’s tight-knit relationship with nuclear weapon laboratories, I realized that most people were not aware of the historic impact and current development of the nuclear arsenal, let alone the UC’s direct hand in designing, engineering and testing warheads. Second-year environmental studies major Maggie Drelichman said that it makes her curious to know what else the UC system is affiliated with. She wonders “if it really aligns with the school’s values, message and mission that has drawn students here.” Drelichman believes that if more people were aware of this issue, “the [institution] would have to respond in a way that explains their collaboration with them and maybe that could spark some change.”

David Krieger, former president and founder of the Nuclear Age Peace Foundation, commented that universities have no business being involved with the development and potential use of weapons of mass destruction. “The University of California has set a very bad precedent in doing that, and students, if they understand what is going on, should be very upset about their universities engaging in development of weapons of mass destruction,” he noted. Krieger added that “universities should take a moral stand and dissociate itself from the weapons.”

The relationship between war and education must be seriously reevaluated.

While the development of new technology is often seen as a marker of progress, we need to be careful about how these tools are used, especially in the face of conflict. Fourth-year statistics and data science major Natasha Pollayil observes that her major is becoming increasingly popular with students. She warns that nuclear weapon industries will continue to be funded so long as people keep entering the field, as technological advancements have created a demand for engineers. Pollayil says that while these new technologies may be presented as “advancements,” we need to be asking ourselves what exactly we are advancing toward.

Spending substantial sums of time and money constructing weapons whose sole purpose is to kill masses of people rather than spending those resources on issues directly affecting students is a betrayal of the purpose of our university system. The relationship between war and education must be seriously reevaluated.

We as students and faculty of the University of California must use our voices to make others aware of the dark secrets that are hidden from the public’s view. We must call out our university leaders and demand change in a system that supports inhumane and immoral practices. The University of California is too great of an academic institution to still be supporting unethical practices nearly 80 years after it first became involved in the creation of nuclear weaponry. As members of this system, we have the power — and the responsibility — to take a stand.

Carley Weiler strongly believes that the University of California should disassociate itself with the development of nuclear weapons.

“mass murders of the people of Hiroshima and Nagsaki” – huh? We were at war and our enemies were scrambling to develop the same weapons.

The Japanese military was not scrambling to develop atomic bombs. Soviet entry into the Pacific theater guaranteed Japanese surrender, and US leaders knew as much.

I do agree that schools shouldn’t be working on weapons leave that for the military or the Air Force. But I don’t think they should stop their research more focus on making nuclear energy more common to switch from fossil fuels.

Boring. American Indians weren’t genocided, most Indians who died had never been in contact with a white settler before. Disease happened, and it was before germ theory, so this is a tired argument. Also, slavery is an ultimate economic detriment, as it delays the development of labor saving devices and automation, which is why Athens had the know how to implement steam power but never used it. But to the larger point, if all these top research schools didn’t develop the atomic bomb which shocked and awed Imperial Japan into surrendering, an estimated millions would have died in land invasions… Read more »

It could have been dropped as a demo. And if you come back with the govt’s own “what kinda demo would it be if it fizzed out?”, the same applies to the actual drop. Heck the govt’s self-serving estimate (taught in all the schools — years back) re the millions of lives saved is as much a “what if” scenario as “what if the demo failed’ (the los alamos bomb went off as planned). Pamphlets! Are you seriously suggesting graffiti dropped by plane would be taken as fact (as compared to an actual demonstration)?! If there is anything to be… Read more »

OP here. Considering it took two bombs to get Japan to surrender, I doubt dropping one as a demo would’ve worked. Regardless, the Manhattan Project came up with 4 bombs, 1 of which was used as testing. 2 of the others were considered likely to work as intended, and the last was considered unlikely to work as intended. Since it took 2 bombs to get a surrender, wasting one on a demo would’ve been risky as hell. And either way, more civilians would’ve died in a conventional bombing campaign or in a land invasion. The Japanese military literally trained civilians… Read more »

A discussion based on hypotheticals (most are) — so we will never know the psychology of the demonstration (assume, e.g., that japan had more than days to decide prior to the demo [the limited time allotted prior to Nagasaki]).

As for defensive wars, it is good you restrict the scope to the 20th century (one can take issue with Iraq #1 and Vietnam) and do not include war and war-acts (e.g., bombings) in the 21st.

I’m Japanese, I’m against what happened in Hiroshima and Nagasaki, and I think this article is fearmongering.

I am the Survivor of Hiroshima. We were there 800 meter from Ground zero. Thank you.
Toshiharu Kano