Students, professors and community members gathered in the rain under the Associated Students Annex on Thursday afternoon, using poetry and candles to mourn the 176 lives lost when a Ukranian passenger jet was shot down in Iran on Jan. 8, killing all on board. 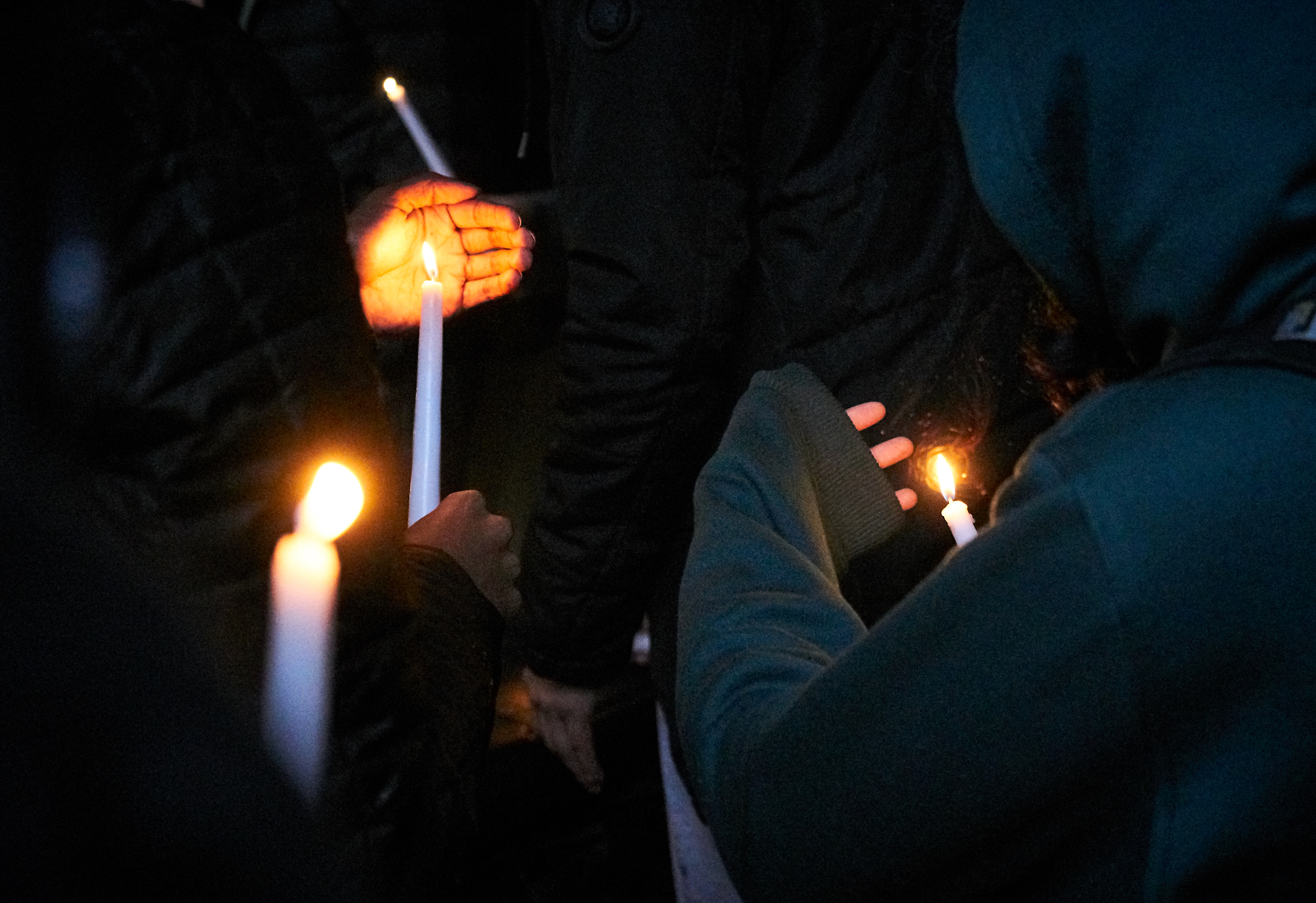 As the group joined together in singing the Iranian national anthem, the vigil ended as it began — in the glow of the candlelight. Sicheng Wang / Daily Nexus

Seven minutes after the Ukraine-bound airline took off from Tehran, Ukraine International Airlines Flight 752 was struck by two surface-to-air missiles but continued flying for several more minutes before crashing into the ground, The New York Times reported. Three days after the plane was brought down, the Iranian government admitted to firing the missiles as a result of human error, The New York Times reported.

At UC Santa Barbara, students mourned the loss by holding a vigil, organized by fourth-year pharmacology major Sarina Abrishamcar. She worked with the Persian Student Group to quickly plan the vigil in only a few days, calling it a “multi-group effort.”

Abrishamcar holds the loss close to her heart as she personally knew victims in the crash.

“We have to remember every single life that was lost. It wasn’t just the life — that life had a family, that life had a mom, a dad, a sister, professors, friends,” Abrishamcar told the crowd.

“I myself, my family had a close family friend that passed away.”

Abrishamcar wasn’t alone in mourning the loss of someone she knew personally. Farhad Kaimi, a community member at the event, said he attended the vigil to “pay respect for the people who died.”

“I had a friend who I knew from middle school and high school. We weren’t close friends but he was on that plane,” he added.

Professor Aazam Feiz, a lecturer in Persian language and literature, spoke entirely in Farsi at the vigil. Second-year Gevirtz doctoral student Sepi, who declined to disclose her last name, spoke immediately after Feiz, translating Feiz’s words to English for those who didn’t speak Farsi.

“We are here to pay respect to these victims … as many of you may have heard, a lot of these victims were students and professors, just ordinary people who were visiting family and friends in Iran and never made it back home,” Sepi translated.

“There were kids, newlyweds, whole families, even, who perished,” she said.

After the vigil, Sepi emphasized the importance of creating an event that is accessible to everyone, regardless of language.

Abrishamcar echoed this message — that lives lost always need to be remembered, above any political or religious differences.

“Especially in the climate that we have in Iran right now, it’s very hard to find unity,” Abrishamcar said after the vigil.

“Everyone has different beliefs and religions and political preferences, but it’s important to have this vigil to remind the people of Iran, in Iran and outside of Iran, that at the end of the day, we are all Iranians and we have to remember these 176 lives that were lost. Their death[s] should not be cluttered with the politics that’s going on right now.”

Toward the end of the vigil, Feiz recited traditional Persian poetry, a cultural custom often performed during times of mourning, according to Abrishamcar, who said there are specific ways to both sing and pronounce the verses.

As the group joined together in singing the Iranian national anthem, the vigil ended as it began — in the glow of the candlelight.

“Iran is a country of many religions and many cultures. We’re not all Persian, we’re not all Muslim. There’s Jewish people, agnostics, atheists, Baháʼís, Zoroastrian people,” Abrishamcar said after the vigil.

The Persian Student Group plans to host another vigil mourning the victims on Feb. 18.