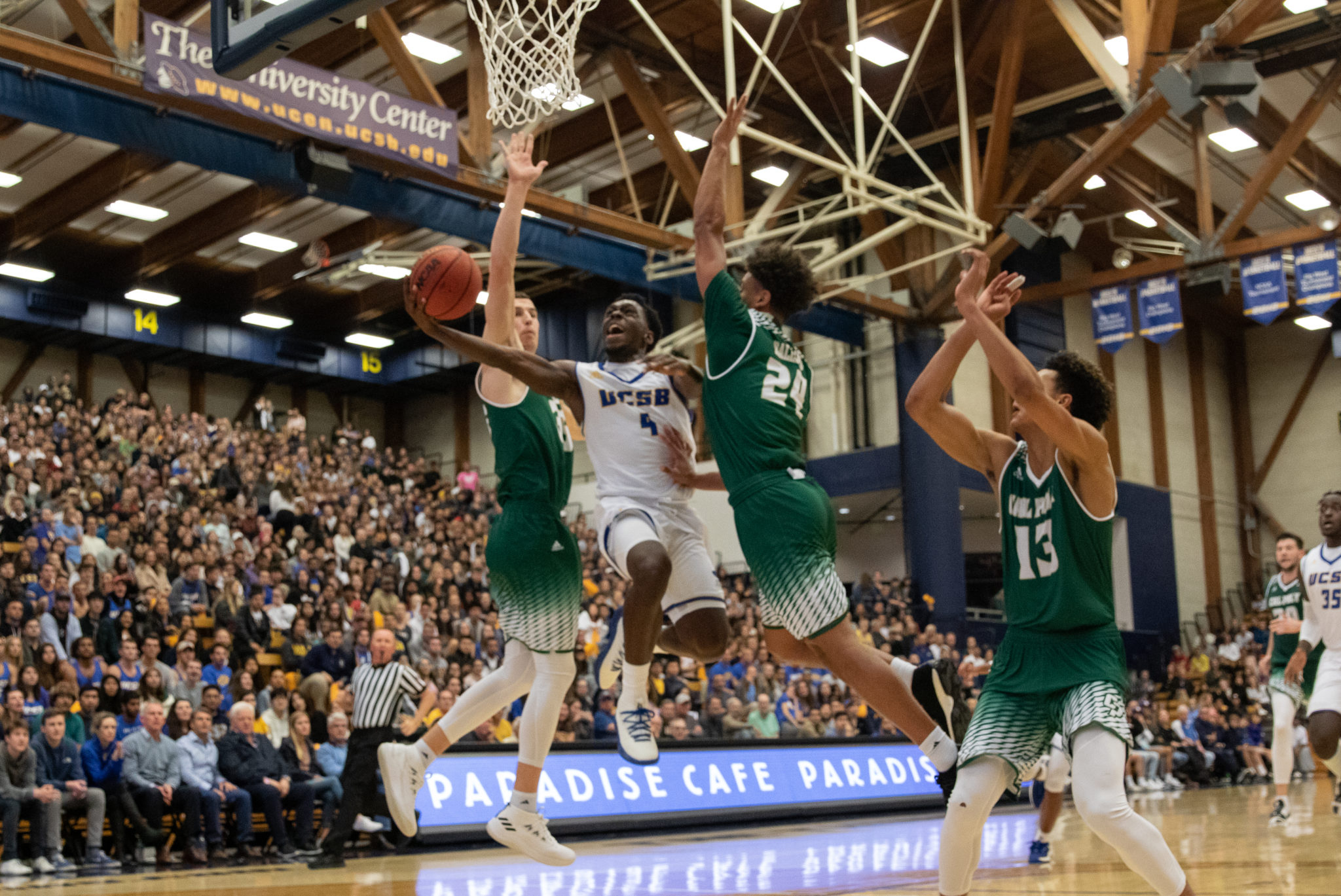 Devearl Ramsey scores despite two defenders being right on top of him. Nexus File Photo

The UCSB men’s basketball team entered Big West play on a five-game winning streak and with a full head of steam. That head of steam turned into a wire-to-wire 63-45 dismantling of Cal Poly on Wednesday night in a statement game for the Gauchos.

The UCSB defense wholly stifled the Mustangs in their strongest performance all season. Cal Poly shot just 28.3% from the field and were only able to muster 17 points in the second half, allowing the Gauchos to walk away with the victory.

Junior guard Devearl Ramsey had four steals — the most on the team — and set the defensive tone. UCSB created 14 points off of turnovers, which helped the Gauchos pull away early and keep the Mustangs at bay.

Cal Poly couldn’t buy a bucket against the UCSB defense, but the going was much easier on the other end. The Gauchos shot 51.1% from the field, hit 7 of their 14 threes and had few issues pulling away.

Junior guard JaQuori McLaughlin led the Gauchos with 15 points and 3 three-pointers, to go along with 4 rebounds and 4 assists. Ramsey, somewhat surprisingly, led UCSB in rebounding with 8 boards, the first time the point guard has led the team in rebounding this season.

The Gauchos now turn their attention to the Long Beach State team, which will travel north on Saturday to the Thunderdome. The Beach, at 5-12, have had a rough go of it this season.

Some of Long Beach’s struggles are a result of a brutal nonconference schedule. The Beach have played the 16th hardest schedule in the country, according to kenpom.com, with losses to several high-profile teams including No. 24 Arizona and St. Mary’s.

Then again, the Beach have also often beaten themselves. LBSU turns the ball over 17.4 times per game, creating 18.5 points off of turnovers per game for the team’s opponents.

Long Beach’s ball-security issues can be attributed in some measure to the tough schedule and to their scorching pace (34th in the nation according to Fox Sports), but the fact remains that the Beach make a lot of mistakes and create a lot of opportunities for their opponents.

The Gauchos haven’t been the most effective team when it comes to creating opponent turnovers and turning them into points, however. UCSB forced over 15 turnovers in just 2 of their 7 games in December and won’t have the same physical and skill advantages that LBSU’s more high-profile opponents had.

Saturday’s matchup will be a clash of playstyles, with UCSB coming in at 330th in the nation in pace according to Fox Sports. Long Beach State will be eager to play fast, and whichever team succeeds in setting the pace will have a leg up on both ends of the court.

Despite playing at a much slower pace than the Beach, the Gauchos will have their Saturday opponent beat in points per game, 73.7 to 68.6. The Long Beach State team pushes the pace and takes a lot of shots, but they don’t make many of them with a 43.2% rate from the field and those turnovers create a lot of empty possessions.

When the Beach does successfully turn one of the team’s many possessions into points, it’s often either sophomore guard Chance Hunter, sophomore guard Michael Carter III or junior guard Colin Slater doing the scoring. Hunter leads the team with 13.9 points per game, and Carter III and Slater are both in double-digits as well.

Hunter is also second on the team in rebounding with 5.1 rebounds per game, only behind 6’11” freshman center Joshua Morgan, an impressive feat for a 6’6” player like Hunter. Carter, meanwhile, leads the Beach with 3.1 assists per game but turns the ball over 3.8 times per game.

Long Beach State lacks significant size inside, which should present UCSB’s sophomore forward Amadou Sow with offensive opportunities. Morgan is the only Beach player taller than 6’9” Sow, and at 195 pounds is at a disadvantage against the 235-pound Sow.

Exploiting advantages, whether it’s size or turnovers, will be the name of the game for the Gauchos on Saturday. If UCSB is able to turn Long Beach State’s mistakes and size into stops and points, then they’ll have a good shot at keeping the good times going.