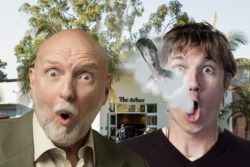 Last week marked the last of fall quarter finals for most UCSB students. This proved to be both a blessing and a curse for student Jake Gladstone, whose soul left his body sometime around his 10th Redbull last Monday. Normally this wouldn’t be an issue, but it failed to return, even after Gladstone completed his finals.

“I thought it would just come back like usual,” Gladstone said. “Last year, it left during a library all nighter when I was pouring Frito Dip into a bag of Doritos at 4 a.m., and it came back after my last final, when I had my first glass of water after about two weeks of straight yerb.”

This year, however, Gladstone’s soul seemed to have gotten lost.

Gladstone said he “wasn’t too worried” until a week later when he received an email from UCSB economics professor Gary Marvitz saying he thought there may have been a mix up. “It was the strangest thing,” Marvitz told Nexustentialism. “I was grading final papers and all of a sudden, I felt a cold rush of air, then the intense urge to find some nicotine. When I tried to ask my TA what was wrong with me, all that came out was ‘bruh.’”

Post-final soul mix ups are not common at UCSB, but they have occurred. Historical records date the last switch to 1968, when third-year student Nancy Brown’s soul accidentally slipped into fourth-year student Mary Rogers, who was later able to return Brown’s soul by “sneezing it out.”  Rogers would take this life experience as inspiration to fuel her original screenplay and subsequent hit, Freaky Friday.

Though Marvitz seems pretty happy with his additional youthful soul (noting that he’s been able to drink more and increased bedroom stamina), Gladstone is still patiently waiting for it to come on out of there.

“I dunno, maybe I’ll try baiting it with a game of die or put on a good Joe Rogan podcast, my soul always seemed to like that stuff.”

Emma Demorest thinks it’s not her fault that you don’t get the Freaky Friday joke because you never watched a cinema classic.