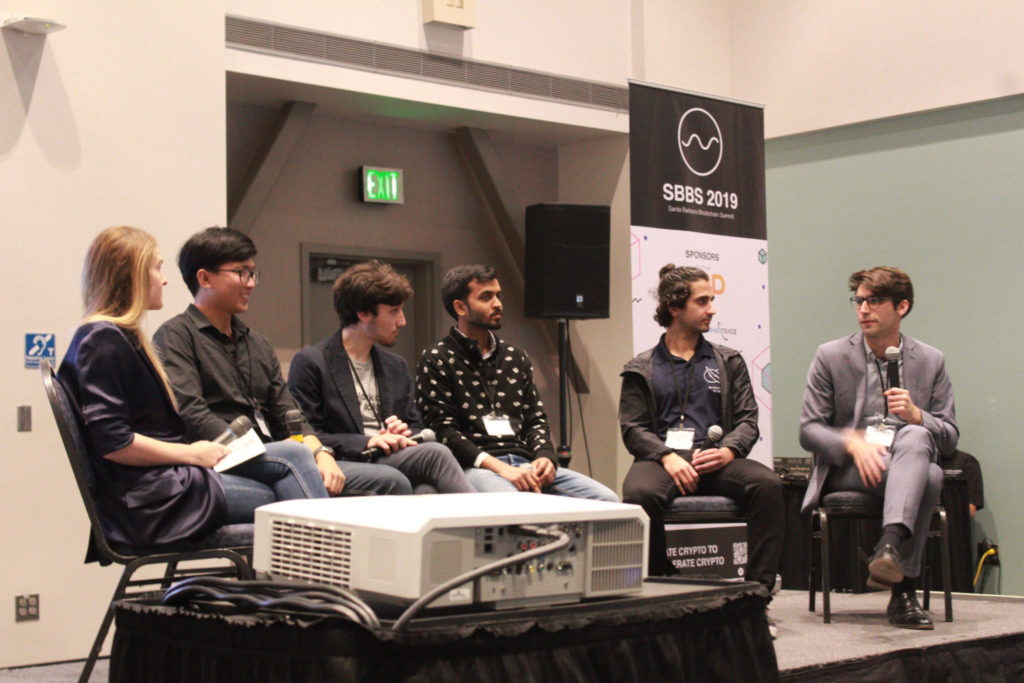 The “State of Blockchain Education” consisted of a panel comprised of students in blockchain organizations. / Courtesy of Sean Crommelin

Working in collaboration with the Blockchain Acceleration Foundation, the summit consisted of speaker presentations, speaker panels and workshops. Events were subdivided into three different tracks which were held in the different sections of Corwin Pavilion. These were the Genesis Track, the Education Track and the Development Track.

Blockchain is an encrypted ledger system composed of records known as blocks which are linked together with cryptography.

“Think of a database — but the database isn’t stored in one place. It’s stored in many, many places sort of decentralized all over the planet,” said Brian Fox, a computer programmer and free software advocate who presented in the seminar “Preserving Democracy With Open Source Technology.”

Resistant to tampering, open-source and very secure, blockchain was originally created to serve as the transaction ledger for Bitcoin, a cryptocurrency. It has since been seen as an attractive medium by which one can carry out digital voting, data sharing, data backup and recordkeeping, among other things.

Fox spoke on his experiences in the tech world and his advocacy for open-source voting software, as opposed to proprietary software currently used in many localities. In this case, the use of blockchain would prevent fraud and lessen vulnerability to manipulation.

“So in the sense of the summit, it’s like blockchain is kind of a broad, not umbrella term, but it has implications which are more abstract to all of these specific things,” Fox said. 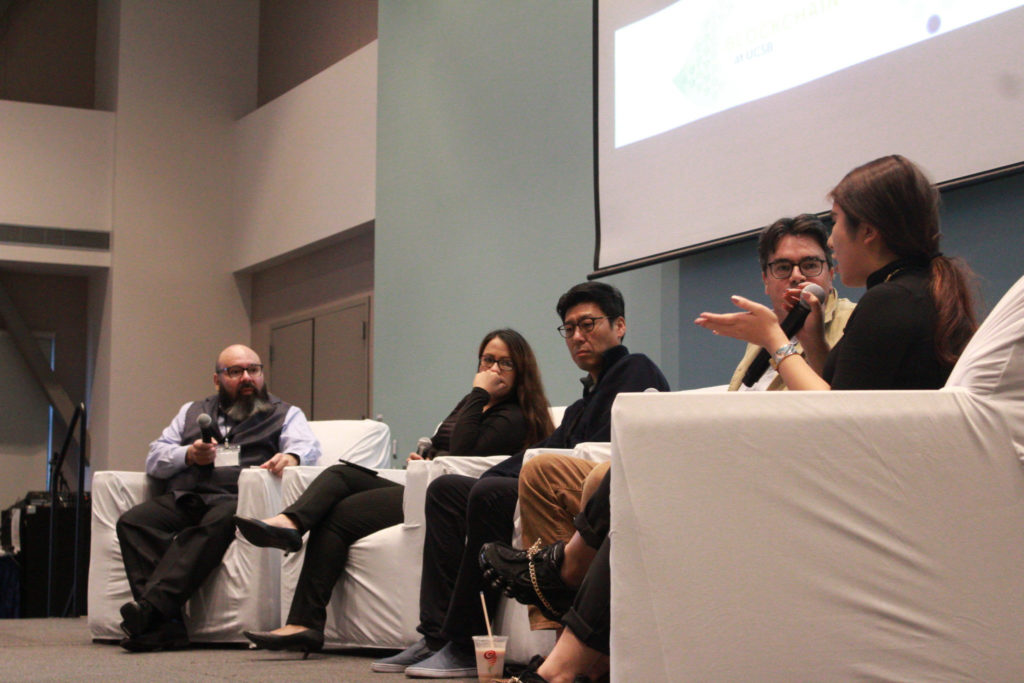 One panel called “Blockchain Abroad” featured panelists from various countries who spoke on the state of cryptocurrency and similar technologies in their respective countries. / Courtesy of Sean Crommelin

Perhaps most prominently featured at the summit were discussions of the role of personal data and personal privacy in the digital era. A number of panels intended to dissect and evaluate how private companies have balanced respecting the privacy of users with using data in order to tailor advertising.

The keynote address, entitled “The Weaponization of Personal Data,” featured an interview with Julian Wheatland, the former acting CEO of Cambridge Analytica, by journalist Rachel Wolfson.

Best known for being embroiled in a scandal regarding its involvement in the 2016 presidential campaign of Ted Cruz, Cambridge Analytica was a British political consulting firm which shuttered in May 2018 after the news broke that an outside researcher, Aleksandr Kogan, was sending data from users taking a Facebook personality quiz — and the data of users associated with those who took the quiz — to Cambridge Analytica without the consent of the vast majority of those affected.

The firm acquired the personal data of 87 million Facebook users through the app “This is Your Digital Life,” and in doing so, breached Facebook’s terms of service. Cambridge Analytica was in turn banned from advertising on Facebook’s platform.

Wheatland acknowledged and expressed remorse toward Cambridge Analytica’s involvement, although he attempted to dispel more heinous accusations levied against Cambridge Analytica by claiming that information was never used for anything beyond advertising.

“What Cambridge Analytica was doing at its core was not hacking into people’s minds and getting them to do stuff against their will. What it was doing was making advertising more efficient,” Wheatland said.

However, speaking more broadly, Wheatland drew a distinction between the different types of data which are of interest to different parties and brought attention to the fact that tailoring advertising to individuals using data is not unethical in and of itself and can be used to increase the efficiency and efficacy of advertising.

“There’s lots of different types of data. I mean, the fact that someone might know [that] I like fast cars is fine with me. Knowing the balance of the bank account is different … it’s not protecting data with marketers in particular,” Wheatland said.

Instead, Wheatland expressed a desire to give users more leverage in deciding how information can be used and put some responsibility on firms to give back to their customers without stifling “business model innovation.”

“If you look at the Googles and you look at the Facebooks, they’re not just making profits off the data, they’re making super profits, and you know, all power to them. But I think it’s about time that some of that was shared back with the users, and I think that there is space there.”

In effect, according to Wheatland, conduct and transparency in managing user data are what define ethical versus unethical data analytics. If data analytics can communicate to people more effectively by harnessing data, and if the efficiency in marketing products and services can be improved with data, then the question of ethical use is a “how” question, not a yes-or-no question of whether using data itself is unethical.

“I want this question of ethics, and corporate ethics, and this idea of having ethical management. This, I think, is something that we desperately need … and there is not yet enough people dealing with the practicalities of it,” Wheatland said.

Other panels, such as “Blockchain Legal Frameworks,” featuring event speakers Morvareed Salehpour, Mark Hiraide and Emilio Cazares and moderated by Veronica Reynolds, focused on the establishment of legal frameworks for the use of blockchain technologies and the role of regulatory bodies such as the U.S. Securities and Exchange Commission (SEC) in creating and regulating cryptocurrency and cryptocurrency markets.

“In the long term, we’re going to see this digitization of everything and to get there is going to take some action from our legislators to be able get more movement. Because right now, in order to do something really innovative, there is a high cost to legal and appliance and all that, and in turn, a lot of risk,” Salehpour said.

Panelists described how, in many aspects, governments have not reacted appropriately to different forms of technological innovation, and how the United States in particular has expressed a certain unwillingness to reconcile the idea of embracing new technology with their role in acting as a regulatory body.

“Facebook decided to announce Libra, [and] our congressman decided to react with, ‘Stop this from happening,’ versus, ‘We do need to digitize, like how do we do that in a way where the tech isn’t self-regulated and so that we have a way to control it and make sure that everything is being done in the proper way,’” Salehpour mentioned.

However, with the SEC in particular, Hiraide described how the commission is tasked with simultaneously cultivating innovation while also acting in the best interests of investors and administering effective securities laws.

To illustrate, the panelists discussed an instance when the SEC halted an unregistered digital token offering by the messaging app firm Telegram, which managed to raise $1.7 billion from investors.

“Fully decentralized systems … may sound good in theory, but in effect, to have business, we need some kind of centralization to degree. That’s the only way it’s going to work. That’s why these enterprise applications have stronger credit right now,” Salehpour said.

“When something goes wrong, you’re able to find who is responsible. Otherwise, as you get more decentralization, you have things such as no operator liability, and you get parties that shouldn’t necessarily be liable being called into court.” 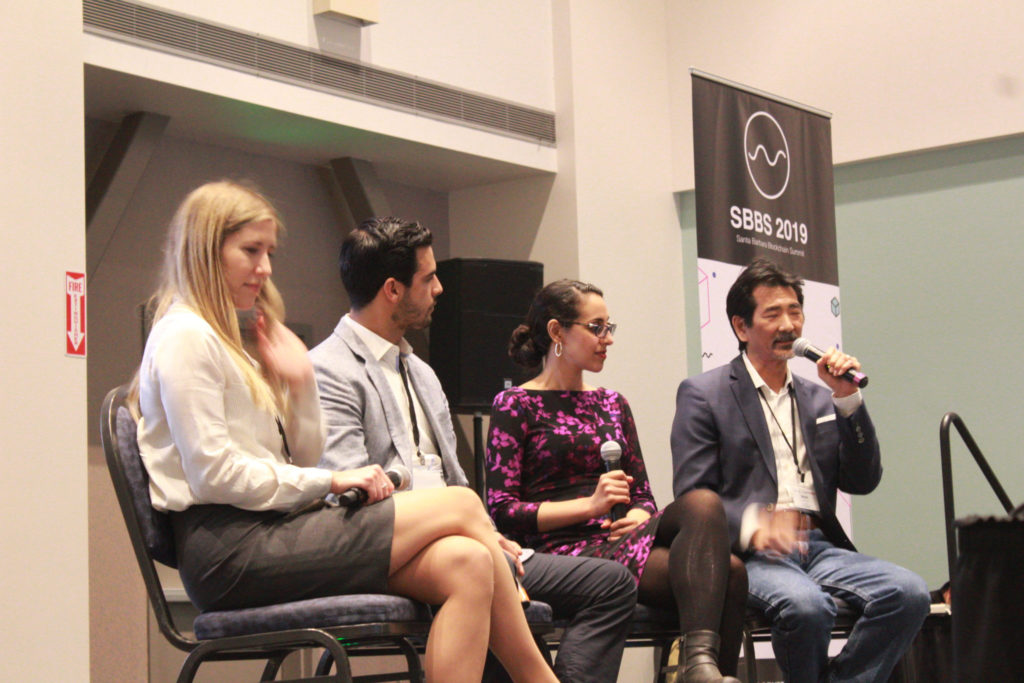 Moderated by Veronica Reynolds,”Blockchain Legal Frameworks” featured event speakers Morvareed Salehpour, Mark Hiraide and Emilio Cazares, who discussed the establishment of legal frameworks for the use of blockchain technologies. / Courtesy of Sean Crommelin

“That’s encouraging, because it looks like the SEC is recognizing that they can’t keep hammering these companies … Telegram [was] very publicly kind of against the SEC, but I think we’re going to see a little bit of easing and a little more clarity,” Hiraide said.

The panel that was potentially most relevant to students interested in becoming involved with blockchain technology in a professional or academic capacity was the “State of Blockchain Education,” which consisted solely of students in blockchain organizations.

The panelists described the general wariness of higher education in establishing a blockchain curriculum and starting blockchain courses. They also covered the Blockchain Acceleration Foundation’s progress in bringing more legitimacy to blockchain technology’s uses as well as in integrating it into the greater sphere of academia.

“They kind of want to see if we can prove ourselves … especially because this is an emerging technology. So it’s pretty new. They don’t really know much about it. They don’t really want to put their brand behind it,” Palmisani stated.

Despite this, Palmisani, hailing from Italy and having obtained his B.S. in Economics from Università Cattolica del Sacro Cuore, was quick to emphasize how being in the UC system has granted students greater opportunities than what can be found in many other institutions.

“On the other side, I know how in reaching an audience, the amount of resources and opportunities that are present here, especially the UC system and California universities in general, is amazing. So for me, this was amazing,” Palmisani said.

Other panelists spoke on establishing blockchain curriculum with the help of people in the industry and academia itself, especially as interest in blockchain among the student body in various institutions continues to grow exponentially.

“One thing I do want to say is that having industry advisors and people who are experts in the field help with an academic organization is tremendously helpful, because in a traditional classroom setting, they have outdated models, and they have to follow very, very rigid sets of curriculum that have been going on for the past five to 10 years,” Eshaghi said.

According to Eshaghi, having a student club that can run workshops and seminars with input from companies allows one to work with a new set of perspectives and ideas which are more current and relevant to the industry that students may want to enter.

“That’s exactly what those companies are pushing. It’s initiatives that they want to be spending money on, and it gives the students a better connection to the industry versus, like, going to a career fair and doing things very, very traditionally.”

And it seems that, in many cases, those connections pay off.

“I actually had a student come up to me sometime last year, and he told me that he actually got a full-time job out of just coming to one of our events. I think it’s really moments like that, especially [with] this particular emerging technology, that make it so exciting for me and a lot of other guys.” Eshaghi said.