The Daily Nexus
Nexustentialism
It's satire, stupid.
Jack Johnson To Rebrand as “Lil’ Johnson”
December 2, 2019 at 4:20 pm by Emma Demorest 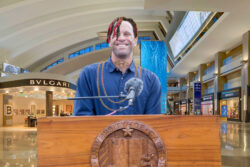 In an effort to keep up with burgeoning young artists like Lil Yachty, Lil Baby and Lil Pump (to name but a few), locally venerated celebrity and big “vibes guy” Jack Johnson informed the press this week that he would be rebranding as Lil’ Johnson.

“It’s something I’ve been thinking a lot about,” Johnson said at the Tommy Bahama inside LAX, where he insisted the press conference be held. “I’m hoping that getting down with the youth like this revives what my music really means: having a chill ‘tude.”

When asked why he didn’t choose Big Johnson or even Medium Johnson, the musician responded by saying that it just isn’t about his ego, and fans agree — he’s just too humble.

While the length of Johnson’s career is far above that of any codeine-slurping, smiley face-tattooed high school senior, he said he doesn’t want people to judge him because of his size, but instead for what he’s done and how long he’s lasted in the industry.

Along with his new stage name, Johnson plans to turn to SoundCloud to release a huge load of content.

“It’s in the works right now, and it should be dropping soon,” noted a barefoot Johnson, yelling above the overhead flight delay announcements. “But not, like too soon.”

We at Nexustentialism wish fellow Gaucho Lil’ Johnson the best of luck with his new stage name.

Emma Demorest has never written a penis joke and this was all really weird for her and thinks poor Jack Johnson doesn’t deserve this content.