The Daily Nexus
Sign of the Times
Freedom Under Fire: Stand with the People of Hong Kong
November 26, 2019 at 1:03 am by Emma Xing

Outside my dorm at the University of Hong Kong, a group of protesters are building barricades with any material they can get their hands on. These barricades, made of chairs, wires and cones, are the only protection they have from the riot police. As I walk past them to get to my hall, a student protester dressed in all black turns to me and says, “Stay safe.” I respond with a mere, “You too.” As the police become more violent, I know he’ll need it more than me. 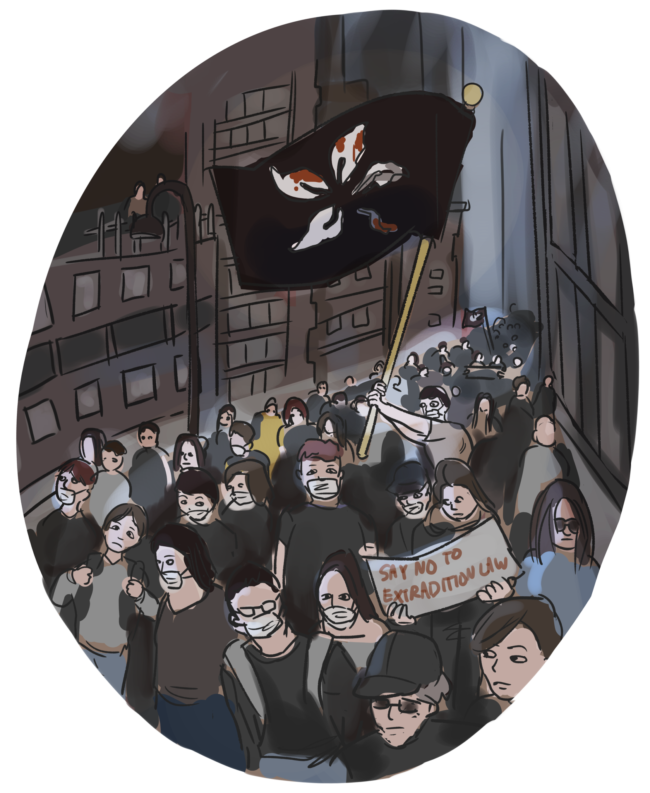 On Nov. 14, the University of Hong Kong announced that it will be halting all on-campus classes and switching to online classes instead due to ongoing violence between police and protesters. The protests in Hong Kong began in response to the proposed amendment to the Fugitive Offenders Ordinance, which would have allowed extraditions to mainland China so local residents could be subject to Chinese jurisdiction. As an autonomous district, Hong Kong was promised a certain level of democracy until 2047, but recent developments have exposed China’s efforts in breaking that promise.

The protests, which began in March of this year, started off relatively peacefully. Organizers of the protests obtained permits as thousands of locals filled the streets. The protesters have five demands, and they are rather simple:

Currently, only the first of the five demands has been met, while the other four have been completely disregarded.

In October, the government introduced the anti-mask law, which made it illegal for anyone to wear a face mask. This bill strips protesters of their protection against tear gas and allows the government to use facial recognition to arrest more protesters. Lam has continuously labeled the protesters as the enemy, calling them “extremely selfish” and has supported the continued police brutality.  On Nov. 16, the government warned 180,000 government employees that they will face immediate suspension if they are arrested while participating in public demonstrations.

The government of Hong Kong has been actively trying to take away the freedoms of the Hong Kong people. Public demonstration permits, which are required by law for any protests or marches, are no longer issued. By not allowing Hong Kong residents to participate in marches, releasing thousands of rounds of tear gas at protesters and firing bullets at young students, the Hong Kong government is not trying to resolve the conflict. Rather, they are actively trying to break down Hong Kong residents through force and violence.

In October, the police shot an 18-year-old high school student protester and continued to arrest him after he underwent surgery to remove the bullet. Just last Friday, a 22-year-old protester fell to his death while running from tear gas. On Nov. 11, the police shot an unarmed 21-year-old student protester in the stomach. And, on the night of Nov. 13, a 15-year-old boy sustained a blow to his head by a tear gas canister and is currently in a coma.

When the government abuses its powers to such an extent, there is no option other than to retaliate. To not react at all is to allow these injustices to prevail.

On the night of Nov. 12, the police fired over 1,000 rounds of tear gas at Chinese University of Hong Kong students. Despite the vice chancellor’s initial attempts at negotiation, the police pressed on and refused to come to a compromise. There were no objects being thrown at the police when the first round of tear gas was fired. It was only after the police released this first round that the protesters threw Molotov cocktails and petrol bombs between themselves and the police as a line of defense.  Throughout the night, the police forces beat, shot and arrested over 100 students. The Hong Kong Free Press reported that, in multiple videos, the riot police could be heard saying “beat the head” as they attacked protesters.

The fight for freedom is often violent and chaotic, but let’s be clear: in this case, the government and the police incited and continue to provoke the chaos. Since June, the government has arrested over 4,000 protesters of ages ranging from 11 to 83. Currently, the riot police are laying siege on the Hong Kong Polytechnic University, trapping hundreds of students inside the campus. When the government abuses its powers to such an extent, there is no option other than to retaliate. To not react at all is to allow these injustices to prevail.

The Hong Kong that I have come to love is one where office workers march peacefully during their lunch break, teachers are concerned for their students’ futures and students are currently fighting for their rights. The Hong Kong I know is resilient and kind; it is a thousand-person crowd parting for an ambulance to get through, the candlelight vigils for the injured and the volunteer-run canteen that allows protesters to eat for free.

The Hong Kong government has been abusing its powers, using excessive force and villainizing the protesters through propaganda. We cannot let this go unnoticed. We are privileged to live in a country that allows us to voice our opinions in public and gives us access to unbiased news sources. I urge you all to use that right to read the news, pay attention and stand with the people of Hong Kong as they continue to fight for the rights and freedoms that we take for granted every day.

Emma Xing thinks that if we value our rights so much, we should stand with others when they fight for theirs.

lmao, this is all nonsense. You should really investigate before say such bullshit. If this happens in US, police officers will shot them to death immediately.

“will shot”! Is thinking your second language?

Students in universities in HK lit the campus and destroyed professors’ office only because they come from mainland China. Try do the same in UCSB and smash your Hispanic/Asian American/African American professor’s laptop and personal belongs. And then claim you are having a peaceful protest and ask for a release. Shame on you UCSB.

Do you know the truth? Do you know that the PLA are currently in Hong Kong? Not saying what everything the protestors are doing are right but you can’t deny freedoms are being denied.

Do u really know what’s happening in HK? These “victims” burned a innocent person alive!!

3. So to “retaliate” is now in fact to sabotage the city, to break into shops, to beat each other, to commit crimes in the name for DEMOCRACY. Violence IS NOT AND SHOULD NOT IN ANY WAY BE TOLERATED in this modern society. We urge peaceful demonstrations and NOT VIOLENCE. When you say “Let’s stand with HK people”, please don’t forget that the policemen are also HK citizens, and so do their families. While you and your “freedom fighters” are burning the city down and stabbing citizens who hold different opinions, it was also HK gov workers and police who… Read more »

[all website links don’t work in the comment section but copy paste it if you want] 1. Please watch this interview with a HK pro-democracy student leader from DW, an independent western press (copy paste: youtube.com/watch?v=V9nNeO0yWyk). HK people are currently living hell. The violent rioters are taking out their anger to the city, the mainlanders, the police, and the children of the policemen are bullied in school and and their families are beaten (copy paste: channelnewsasia.com/news/asia/hong-kong-protests-police-children-bullied-data-leak-yuen-long-11746034). These extreme protesters lit a man (who is also a HK citizen) on fire just because he hold different opinions (copy paste: youtube.com/watch?v=jJSxeaQ4IFM&has_verified=1&bpctr=1574929677) (PS:… Read more »

2. Why don’t you mention in your news that the 5 demands requested were ALL PROPERLY and OFFICIALLY addressed by the government, and that the extradition bill was WITHDRAWN A LONG TIME AGO ON SEP 4TH? (copy paste: washingtonpost.com/world/hong-kong-leader-expected-to-fully-withdraw-extradition-bill-a-demand-of-protesters/2019/09/04/b3ca1dec-cee0-11e9-87fa-8501a456c003_story.html). Just because those were not dealt in the way you wanted, so you and the violent demonstrators can continue using this as an excuse to destroy the city, in the name of DEMOCRACY. Do you have any idea in HK, millions of people simply want to live a peaceful life and NOT THIS? It is indeed extremely selfish when you think… Read more »

You are indeed privileged because you should really walk on the streets in Hong Kong and see what kind of life people are living right now because of this allegedly fight for democracy. Let alone the irony that the most active student leaders have fled to the US to pursue their advanced degrees while leaving his/her people in this major mess.

Bro she literally studied abroad in Hong Kong. She quite literally walked on the streets of Hong kong

Not sure who these anonymous commenters are, but they neglect that China is illegitimately encroaching upon Hong Kong sovereignty and is now attempting to stamp out resistance. The protests arose in response to Chinese authoritarianism and are necessary to ensure Hong Kong’s autonomy. This doesn’t mean every act by every protester is good, but it also doesn’t mean that every crime committed in the chaos is by an actual protester. I’m sure some people are just taking advantage of the situation to loot and steal, but this doesn’t undercut the legitimacy of the resistance in any way. Stand with Hong… Read more »

Thank u for sharing your story!!!

This was very informational and empowering! You’re amazing

Thank you for bringing attention to this incredibly important topic. Keep it up!