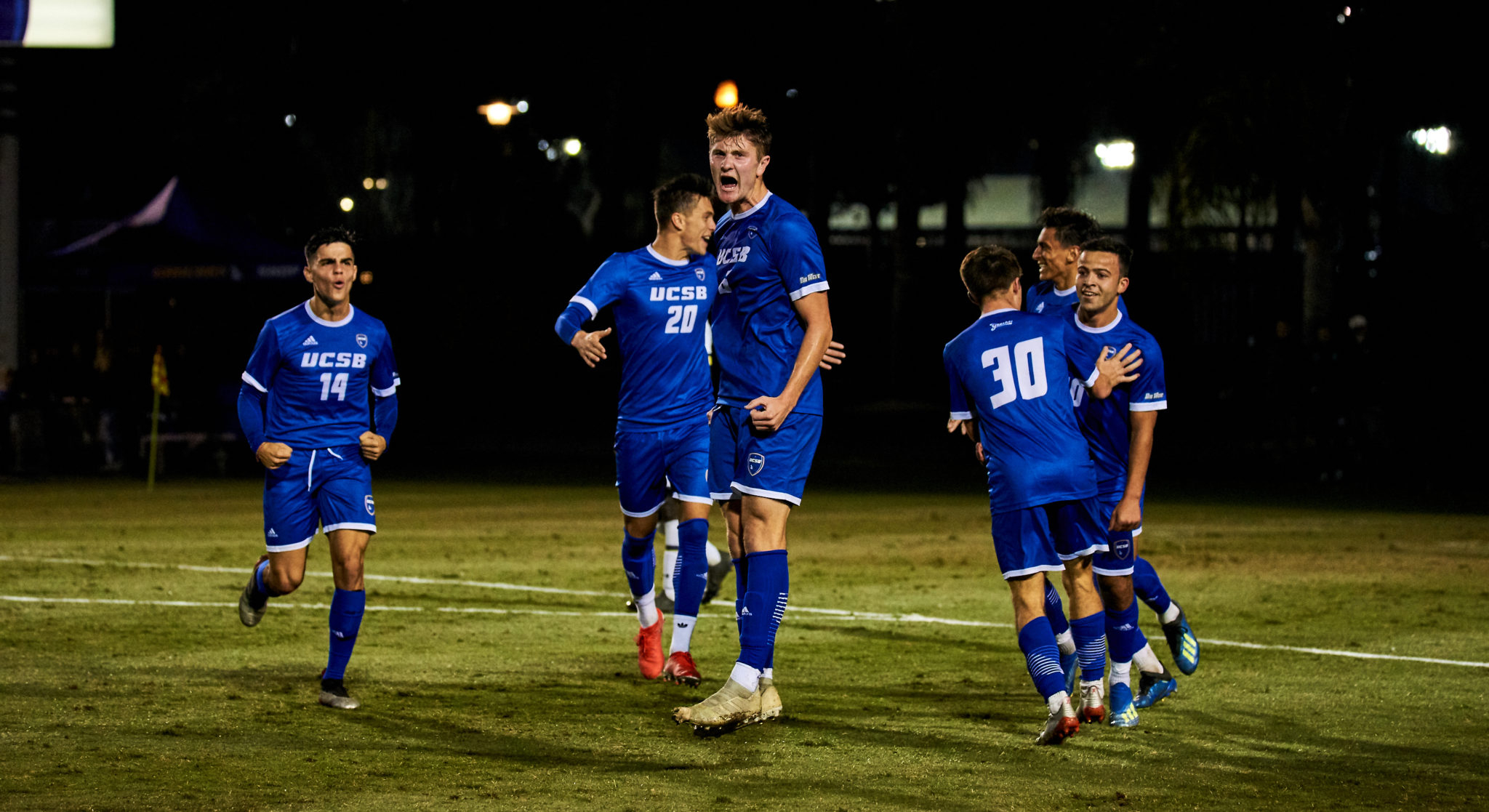 Just three days after a first-round victory over UC Berkeley, the UC Santa Barbara men’s soccer team pulled off the largest upset of this year’s NCAA Tournament on Sunday afternoon, steamrolling the No. 12 St. Mary’s Gaels by 4-0.

The Gauchos handed the Gaels their second loss of the season and have outscored their opponents by a combined 7-1 in the first two games of the NCAA tourney. UCSB has now set up a date with perennial powerhouse No. 5 Indiana in the Sweet 16 next Sunday.

On paper, St. Mary’s had seemed to be one of the toughest matchups that the Gauchos would face in the tournament.

The Gaels had an incredible 16-1 record before Sunday’s game, had won 9 games in a row and hosted Sunday’s game on an extremely narrow field that cut off a lot of space from the wings that the Gauchos usually utilize on offense. All this, combined with an abnormal 1 p.m. start time, meant that the Gauchos had a plethora of built-in excuses to use had they lost this match.

They didn’t need them.

The Gauchos imposed their will on the game from the opening kick, taking advantage of their extreme size advantage to turn the match into a physical contest.

Kiwi defenders Noah Billingsley and Hunter Ashworth were the engines for UCSB early on. The duo, who helped the New Zealand U-23 national team qualify for the Olympics just a couple of months ago, were everywhere on the field to help the Gauchos start the game off well.

Billingsley tested the Gaels’ defense with a rocket that was deflected in the fifth minute for the first shot of the match.

Santa Barbara had a few more solid chances in the opening stages of the game, but as the first half wore on, it seemed as if UCSB couldn’t quite get the touches that the team wanted in the box. In years past, the team would compensate for a lack of offensive firepower by relying on superb set-piece skills.

One of the positives that Head Coach Tim Vom Steeg has harped on this season is how the Gauchos have been able to score in other ways; however, it was this old style of bully-ball that helped the team gain the lead on Sunday afternoon.

In the 32nd minute, the Gauchos were awarded a free kick from around 10 yards outside of the box on the left wing. Senior Ignacio Tellechea stepped up and curled a high-arching ball into the back of the box which Ashworth headed down into the middle of the box. The ball took a huge bounce right in front of Billingsley who headed it home, giving the Gauchos a 1-0 lead.

UCSB defended well for the rest of the half and went into halftime with their 1-goal lead intact.

It was all Santa Barbara in the second half, as 3 goals in around 15 minutes turned this game from a close contest to a rout pretty quickly.

Midfielder Kaya Fabbretti collected the ball in the box after a botched clearance and sent a chipped pass over to forward Will Baynham, who blasted the ball into the upper-right corner of the goal to double the lead for the ‘Chos.

Just five minutes later, forward Rodney Michael initiated a one-man fast break on the right wing that culminated in his second goal of the NCAA Tournament after he blasted the ball just past the outstretched arms of St. Mary’s keeper.

And it was Michael again in the 79th minute who put the nail in the coffin with a brace, taking a stolen pass to the house to extend the lead to 4 for UCSB.This has been a historic postseason run for the Gauchos, marking their first time winning 3 games in the NCAA Tourney since 2009. UCSB has relished being in the underdog role so far, but their mettle will truly be put to the test next weekend against an outstanding Indiana team.

At the moment, however, it’s time yet again to celebrate an impressive win over a top team in the country. Knowing these Gauchos, this run isn’t close to over yet.