The Daily Nexus
UC News
“There’s no relying on mommy and daddy”: Foster and Formerly Incarcerated Students Share Their Stories With UC Regents
November 19, 2019 at 8:00 am by Yiu-On Li

“Where I sleep and where I lay my head at night is my home. I don’t have anywhere else to go,” said Rebeca Borges, a third-year environmental economics and policy major from UC Berkeley.

Her audience, during the Nov. 13 UC Board of Regents meeting, was comprised of members from the Public Engagement and Development Committee, who organized the discussion in order to hear from students within the UC system who were or still are in the foster care system or were formerly incarcerated. 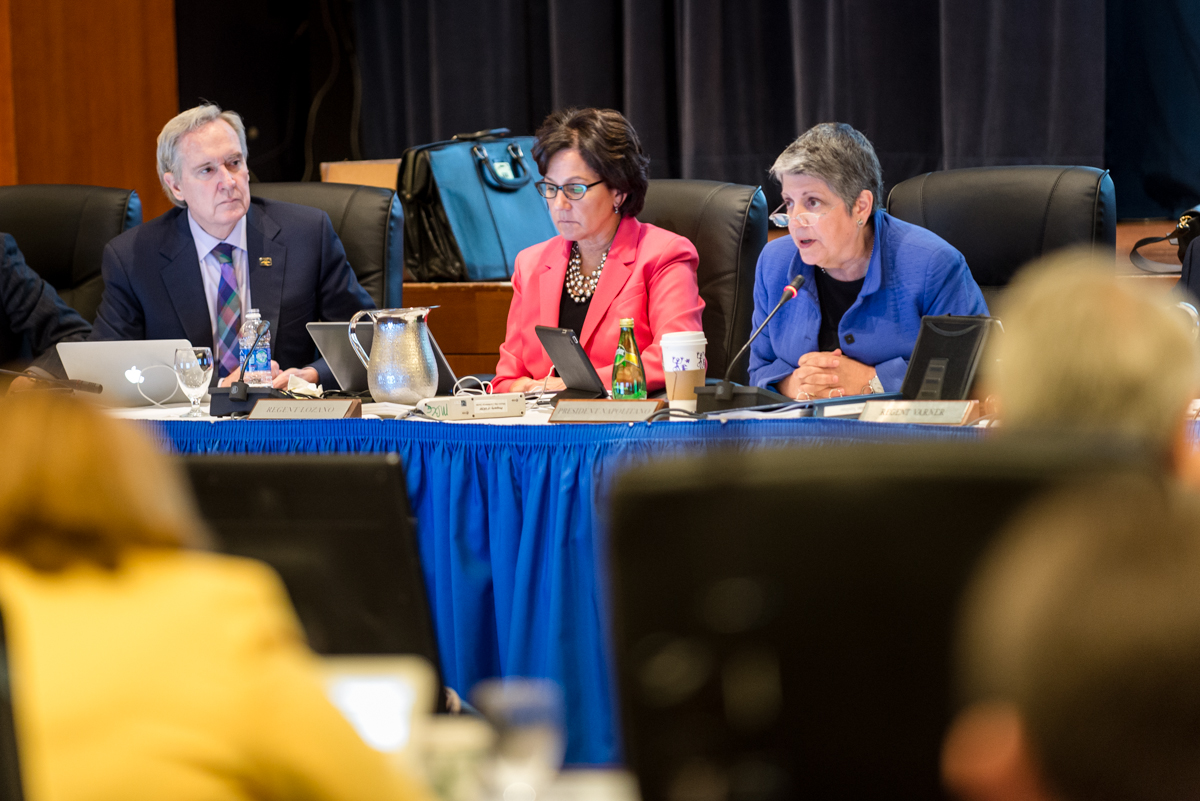 President Janet Napolitano and some of her fellow Regents, pictured at an earlier meeting. Nexus file photo

Fourth-year sociology major McArthur Hoang, a fellow student from UC Berkeley, experienced both, he said in the meeting.

“Life is hard. Finding a place to live is hard,” he said. “I slept on campus because I was too scared to go outside and look for housing as someone who’s a foster and formerly incarcerated.”

Surprise resonated on the Regents’ faces.

“This is horrifying to hear,” Regent Sherry Lansing said. “We should take action on this.”

Resources such as the UC Santa Barbara Guardian Scholars Program (GSP) and Berkeley Underground Scholars exist throughout the UC system, offering academic and career advising as well as scholarships for foster and formerly incarcerated students, respectively.

But a lack of funding and outreach have limited their effectiveness, Borges and Hoang said.

Borges elaborated on UC Berkeley’s own version of GSP — Berkeley Hope Scholars (BHS) — as an example. While BHS does supply emergency housing to students when dorms are closed during holidays, relatively few people know that they can apply for a space, and so most are “kicked out” during winter break, according to Borges, who added that acceptance is limited and based on a lottery system.

As a result, Borges said, students are forced into “the most inadequate” off-campus housing with mold, abusive or neglectful landlords and residents with little concern for their well-being. Securing more suitable arrangements would require parents to sign leases, money to pay deposits and a family tax history — but, as Hoang stated, “There’s no relying on mommy and daddy to get any of that.”

But this requirement does not apply to the UC system until the Regents formally enact it into policy. And so far, according to Borges, they haven’t.

“What I’m here to ask,” she continued regarding the bills, “is to maybe put it on your radar.”

Beyond housing, Hoang proposed other changes that would benefit the foster and formerly incarcerated student population after graduation.

His recommendations included awarding fellowships to alumni to compensate for the extra hands, resources and living space that parents would normally provide in an initial job search; hiring more foster and formerly incarcerated people as employees of the UC system, since they know best how to solve the problems that they themselves face every day; and re-evaluating the use of criminal background checks for certain jobs in the UC system.

Hoang said there is a combined, approximate total of 160 foster and formerly incarcerated students at UC Berkeley, based on the memberships of BHS and Berkeley Underground Scholars. However, he pointed out that, based on his research, the true count includes an “undetected number of about double that” — by including those who do not wish to make their history known due to the potential stigma in doing so.

For their part, the Regents appeared receptive to the presenters’ suggestions. “I think those are recommendations we should seriously consider if we are truly committed to opening the doors to students who are not what we think of as a traditional student in the UC, which is primarily becoming the majority of students in higher education now,” Regent Eloy Ortiz Oakley stated.

Some of the recommendations “seemed to be no-brainers to me,” said Regent Christine Simmons, who volunteered to head a task force to decide on short- and long-term changes within the UC system while conferring with Borges, Hoang, UC Berkeley Chancellor Carol T. Christ and other students interested in voicing their feedback.

Highlighting the need for collaboration and communication to solve issues on a more fundamental level, Lansing advised broadening the task force. “It seems to me it shouldn’t just be us [implementing these recommendations] … I think it should be the community colleges, Cal State and obviously UC,” she added.

“This is a crisis that we have to address.”