The Daily Nexus
News
When Your Home Becomes a Parking Violation: Large-Vehicle Restrictions Affect Isla Vistans
November 14, 2019 at 12:25 am by Nadia Abushanab

For third-year sociology major Erin Joy, the chance to live in a van in Isla Vista was one they were looking forward to having. They bought one at the end of last summer, hoping to live out of it when school started.

But Joy faced a barrier: Students returned to Isla Vista for Fall Quarter 2019 to see several signs posted around the area — “ALL ISLA VISTA STREETS: No parking large vehicles over 24 feet long or 7 feet high or 8 feet wide 9:00 PM – 7:00 AM.” 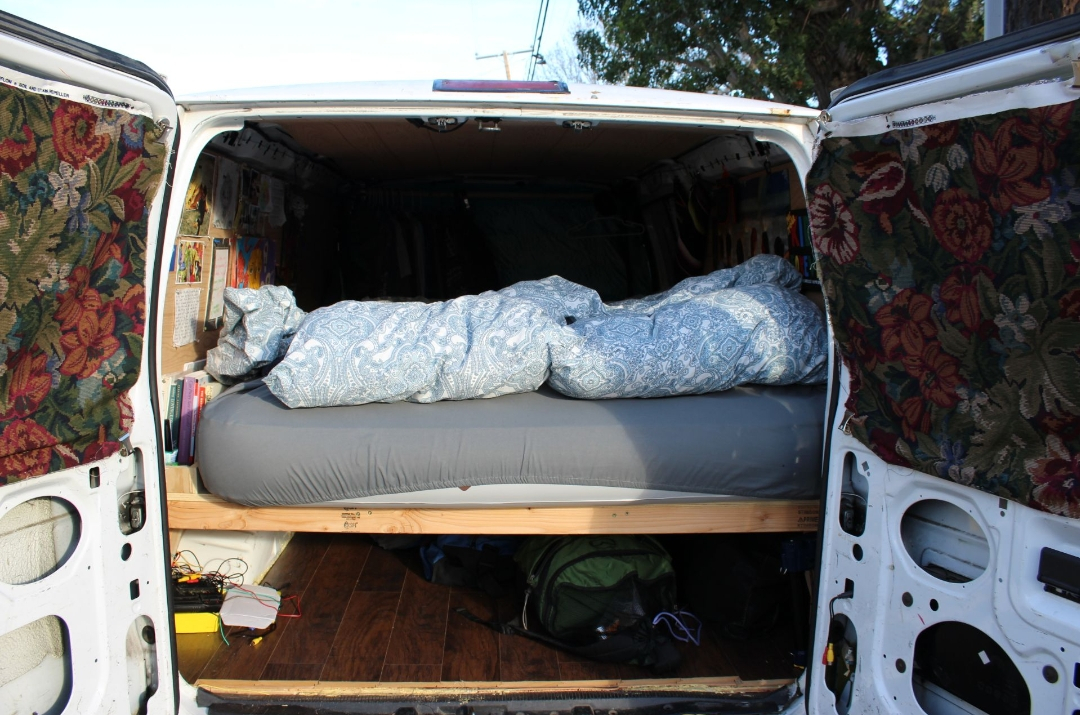 This policy prohibiting large vehicles from parking on certain streets overnight has been in place since 2013, according to District Representative Gina Fischer. Fischer said this policy affects a few streets in Santa Barbara, some in Goleta and every street in Isla Vista.

For students like Joy, it was a shock to learn they would not be able to park their oversized vehicles in Isla Vista.

“It would be disappointing if they started enforcing [the ordinance] in I.V. to kick out students and others who literally can’t afford rent, and live in a van by necessity,” Joy said.

At the College Affordability Town Hall on Oct. 11 students asked Supervisor Joan Hartmann how the ordinance would affect students who live in their vehicles.

“Those [aren’t] students but tend to be other homeless adults,” she replied, explaining that the situation in 2013 – before the passing of the ordinance – saw a number of oversized vehicles parked in I.V. that were not owned by students.

But the issue of housing insecurity is not limited to non-student adults — in 2017, the UC Global Food Initiative found that 5% of UC undergraduate and graduate students experienced housing insecurity at some point in their enrollment.

The average rent for an apartment in I.V. is $2,131, according to Rentcafe.com, a rental site which compiles rental market trends. Some students choose to opt out of paying high rent prices by living in vehicles like vans, RVs or busses.

Katelyn Wiese, a third-year Santa Barbara City College geology student, moved into a school bus earlier this year. She had been living in I.V. for several months, but since these signs have gone up, she said she no longer feels comfortable parking her bus in the neighborhood and now parks in different locations around Santa Barbara.

“The Financial Crisis Response Team can place eligible students who are currently houseless or about to become houseless in bridge housing within 24 to 48 hours, after which the team will work with the student to help them find stable housing moving forward,” Maynard said.

She added that the program can also provide “awards” to students to help if “they have difficulty paying rent and need financial support to stay in their current housing.” 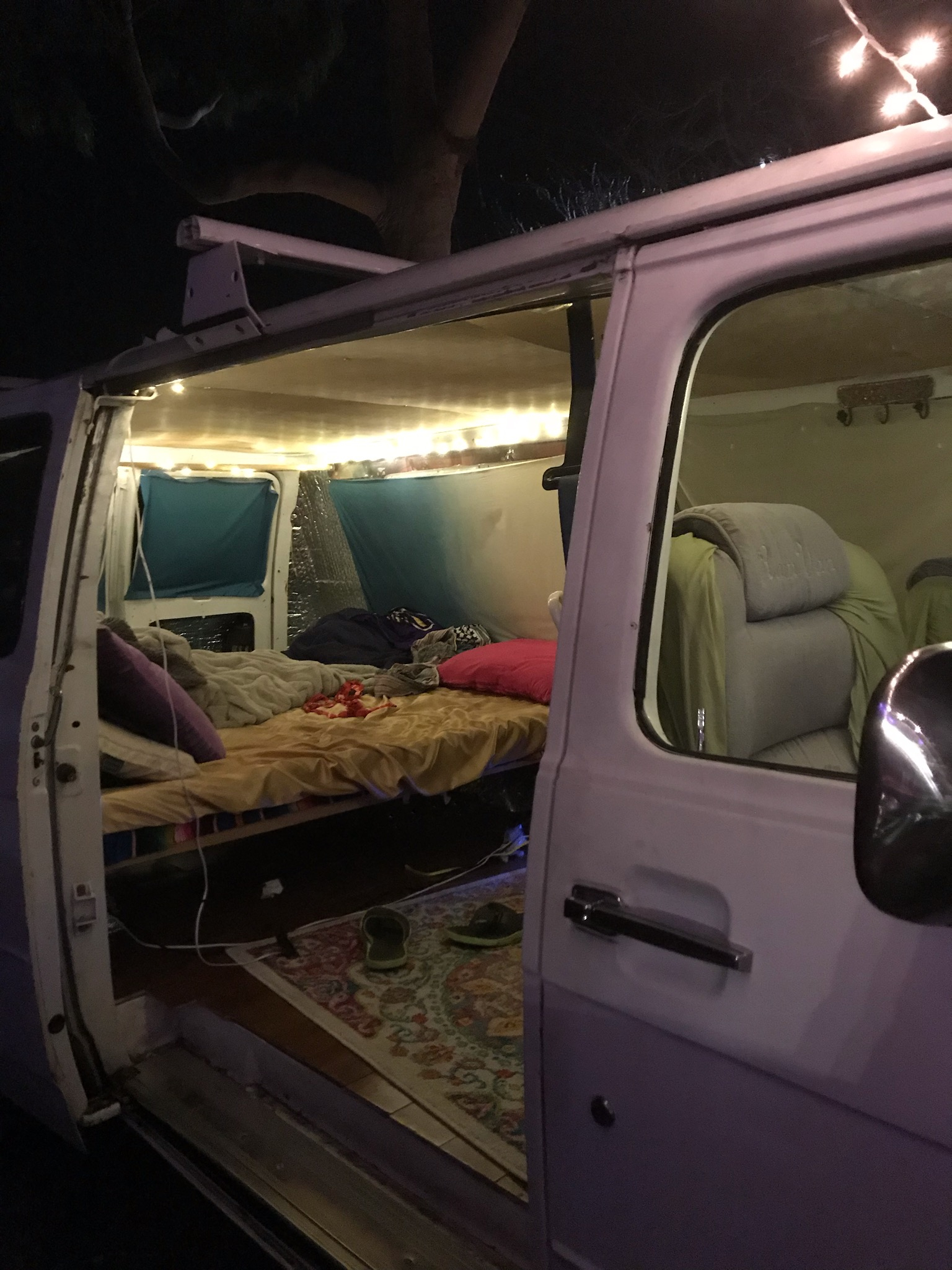 But for some, the decision to move into a vehicle may not be motivated by finances. Both Wiese and Joy said that while their decisions to move into their vehicles were partially due to the financial benefit of not paying rent, they also said they wanted to experience more freedom, be able to travel more easily and learn to live more simply.

According to the Santa Barbara municipal code, all oversized vehicles parked overnight are subject to a $50 minimum fine and possible removal. However, Alissa Hazard, a traffic engineer for the County of Santa Barbara, said that vehicles have previously only been cited when an I.V. resident files a complaint with the Isla Vista Foot Patrol (IVFP).

Although Wiese’s school bus is oversized, she has not yet been cited or towed as of mid-October. She has, however, had multiple negative interactions with I.V. residents, she said.

“[A resident] yelled at me a couple of times … he [said], ‘If you’re not out of here by sunset, I’m calling the cops on you!’ … He said that us van-dwellers make the neighborhood a shithole,” she said.

She has also had conflicts with the IVFP. “They would wake me up at 3, 4 a.m., banging on my door, shining lights in the windows, yelling at me to get out,” she recounted.

According to Cassie Roach, a UCSB alumnae now working for the Safe Parking Program in Santa Barbara, the program is meant to not only provide immediate overnight safety, but also to connect houseless folks to other community resources.

“We partner a lot with the food bank … we also have our own food bank once a month; we try and get people connected to free showers, making sure people are signed up for food stamps, have health insurance [and] are signed up for different subsidized-housing waiting lists,” she said.

Roach estimates that around 10% of their clients are students.

Wiese said that when she has been moved by police officers, they often referred her to the Safe Parking Program. However, she said the regulations of the program have stopped her from pursuing this option.

“It’s not ideal for someone who has irregular schedules, who is either going to school or working. A lot of people who live in their vehicles are working and go to school. It’s not like they’re just sitting around all day,” Wiese said.

Roach emphasized that the regulations of the Safe Parking Program are not meant to make people’s lives more difficult.

“It’s not meant to be this overbearing, strict program that’s going to have rules that they have to follow and just make life harder. It’s meant to be a supportive safe space for them, and we do want to work with all of our clients to see how we can best support them moving forward,” she said.

“We want this to be a resource for students. We want to be supportive and helpful.”

Correction [11:01 a.m.]: Joy uses they/them pronouns. This article has been updated to reflect their correct pronouns.

Updated [Nov. 19]: This article was updated to clarify comments from Hartmann and Fischer.

The people living in these vehicles are not “Isla Vistans”–they want to “live” in Isla Vista without paying. This is a health issue–where are they dumping their excrement?–no accident the buses are often next to parks.

And who is an Isla vistan exactly? The people who squeeze into triples for 3 years and leave, or the few old folks who yell from their lawns?

there’s this thing called “taxes” that everyone living in an apartment or house pays. That is what pays for the roads, police, lighting, sidewalks, parks, etc.–the infrastructure that you, apparently, think falls out of the sky.

people aren’t shitting in parks as you suggest, there are plenty of public restrooms in IV and on campus…

there are two parks with restrooms. neither has vans parked next to them. there are not “plenty of public restrooms in IV”

Chill out these are STUDENTS who cant afford to pay the astronomical rent prices in this town. Give them a break dude

some–there is a subculture of car dwellers in IV

It says in the article that they just want to live their hippy fantasies, and that cost is not the primary reason.

RVs dump their waste at locations called dump stations, there are multiple in the area, including a gas station in Goleta. To suggest people are ‘dumping their excrement’ in the streets of IV is absolutely absurd.

Abolish police !! And put that $$$ into porta-potties.

We should be more concerned with the housing crisis/ homeless students than with where people are pooping.

tell that to yourself the next time you step in some

The only vehicle dwellers who leave excrement in random places would likely do so if they lived indoors. Whether people are living in old accommodations, in a new Mercedes, or something in between, they are usually trying to pass. It doesn’t matter if they’re doing it out of financial necessity or lifestyle choice, most are respectful. Many have jobs, pay taxes, and stimulate the economy so they’re involved with supporting infrastructure. Anyone living in IV is a resident.

Car dwellers “pay taxes”?–what do you think pays for the infrastructure in this town?–the roads, the lights, the parks,sewage treatment,the police, etc. PROPERTY TAXES. Everyone living in a house or apartment is paying them. The dude living in a bus and taking a crap in the park is not.

Do we need a Car Dwellers tax? I don’t think students should be required to live in a possibly over-crowded appt just to go to school.

tell that to someone who comes home from work and cannot park in front of the apt. or house they are renting because a school bus is parked out front.

What if I just pitch a tent in your yard.

Why not check into the Pescadero Lofts?–or pitch a tent in their parking lot?