The Daily Nexus
News
UC’s Largest Union Strikes For the Third Time This Year
November 14, 2019 at 12:41 am by Jackson Guilfoil

For the third time in 2019 — but the first time this academic year — the University of California’s largest union held a strike, this time demanding that the UC put an end to the alleged “illegal outsourcing.” 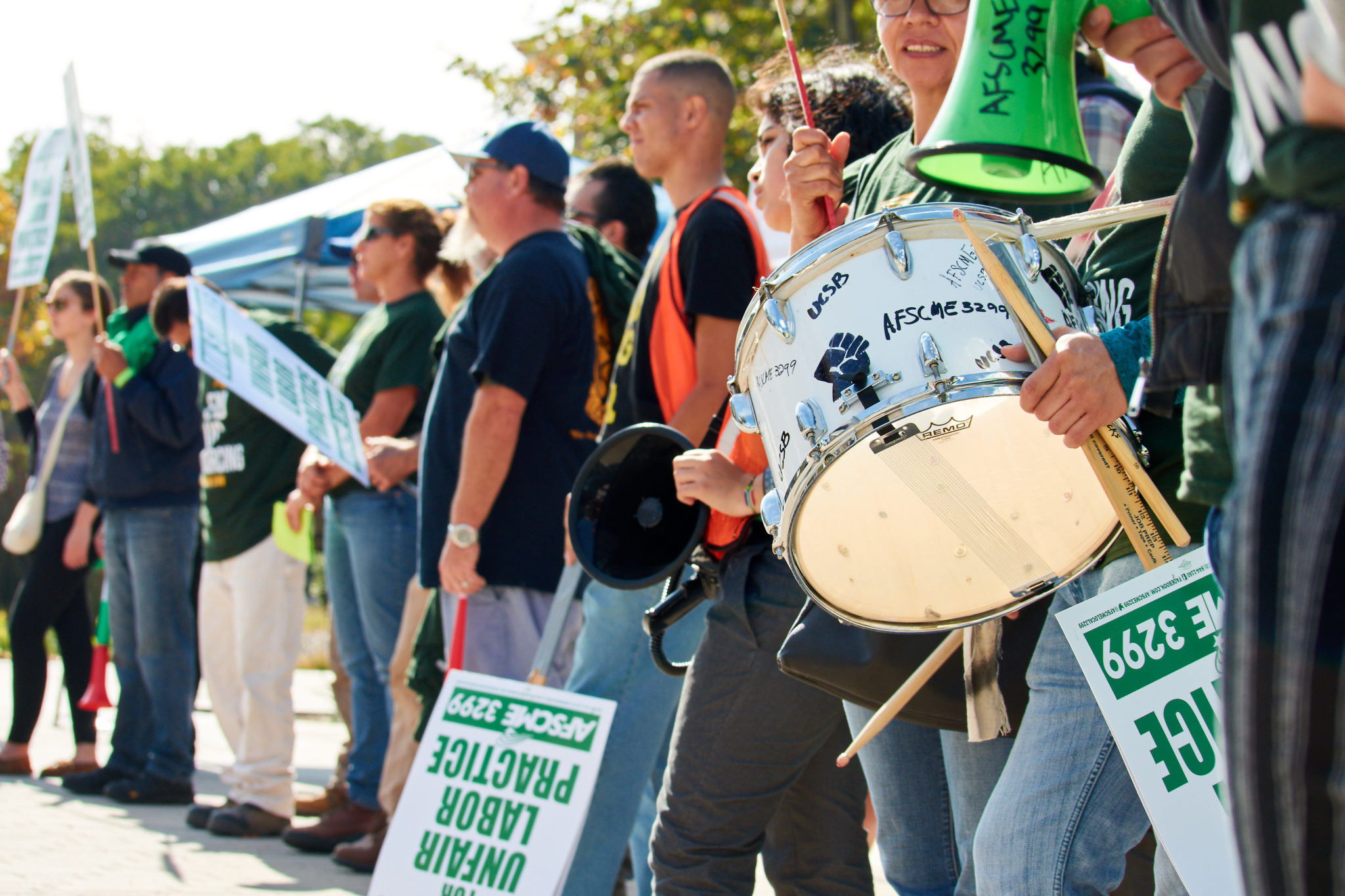 Approximately 100 members and supporters of the American Federation of State, County and Municipal Employees (AFSCME) Local 3299 were present at Wednesday’s UC Santa Barbara strike. The workers set up their base at Storke Tower but spent much of the day marching around campus in order to draw attention to the union’s demands.

AFSCME 3299 — which represents more than 24,000 health care and service employees across the UC system — has been embroiled in contract negotiations with the university for the past two years, and one of its primary demands has been an end to outsourcing.

This strike was AFSCME 3299’s sixth at UC campuses across the state in the past two years — a point of frustration among many of the workers.

Jarrod Colvin, a custodian at UCSB and an AFSCME 3299 member, said that he was “disappointed” with the number of strikes but added that he felt the only way the university will change its behavior is if the union keeps striking.

“The fact that we’re out here again on unfair labor practices has me a little disappointed about making and impact on the way they follow the rules, but I think the only way that we’re ever going to make a change on that is by keep coming out,” Colvin said.

Paco Garcia, a senior lead laborer in facilities management at UCSB and an AFSCME member, added that union workers “don’t make the cost of living.”

The UC Regents is currently considering a motion that — with a few exceptions — would prohibit outsourcing and adopt contracted workers to the UC’s payroll if they have been working for the UC for over a year. On Wednesday night, the UC Regents Governance Committee approved the motion; it will now move on to the Board of Regents for a vote. 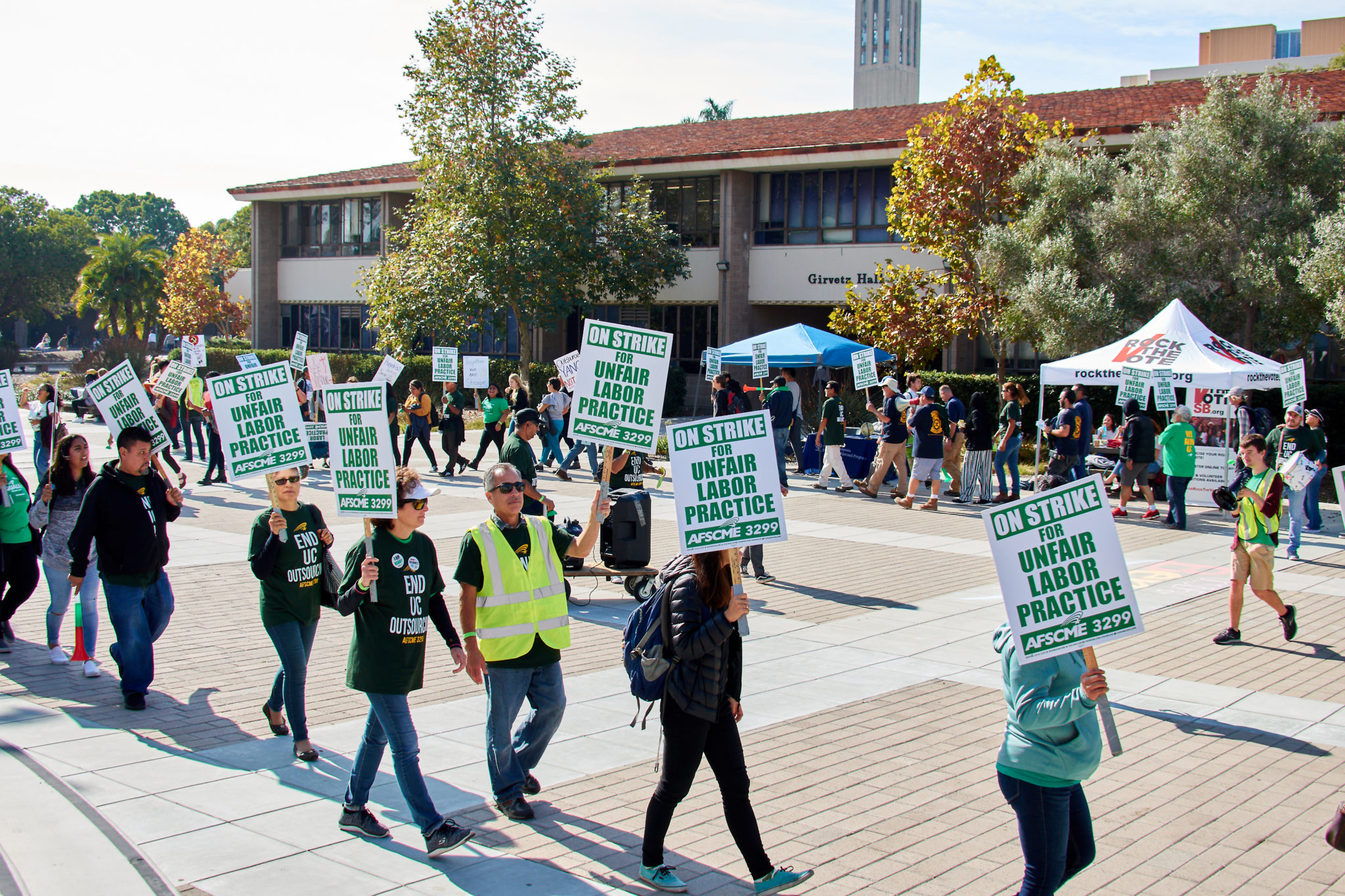 AFSCME 3299 filed six complaints against the UC on Nov. 1, which primarily alleged unfair labor practices such as outsourcing and accused the university of cutting costs by contracting with private companies to do work which could be done by union workers.

The majority of outsourcing has been at medical centers on campuses like UC San Francisco and UC Los Angeles, rendering UCSB a school where outsourcing has a relatively smaller impact, Gonzalez added.

At UCSB, much of the outsourcing is in custodial work, which Garcia said could be performed by staff. AFSCME uses strikes as a bargaining tool, he added — the strike forces the university to hire more people to replace the strikers, which in turn provides the UC incentive to listen to the union’s demand that they end illegal outsourcing.

Despite AFSCME’s insistence that the strikes are about the illegal outsourcing complaints, UC Office of the President spokesperson Andrew Gordon called the strike a strategy to gain “leverage in negotiations.”

Gordon added that the union ultimately wants double the wages of other employees and said AFSCME 3299 utilizes the strikes as a mechanism to achieve that goal.

“Despite union concerns about contracting, the number of AFSCME-represented employees has actually grown by double digits in the past five years,” Gordon said. “UC’s contracts with AFSCME protect employees from displacement due to contracting, and no employee can be terminated as a result of a subcontracting decision.”

The strike saw a degree of student solidarity, such as from Wendy Santamaria, a fourth-year political science and philosophy major, who attended the strike alongside her fellow Students for Bernie organization members.

“I see it as absolutely crucial for us as students to come together with workers,” Santamaria said.

“As long as we keep spreading knowledge of the issues workers are facing, [support for the strike] is going to continue to grow,” she added.

In addition to the student support, external groups such as hip-hop duo Rebel Diaz, a Chicago-based group that was on campus Wednesday to perform at a separate event, marched through campus with the strikers.

“We know that the struggles they’re fighting for are not just about wages but about this idea of an entire system becoming privatized and the outsourcing of jobs and services that should be publicly funded,” said Rodrigo “RodStarz” Venegas, who is half of Rebel Diaz.

Gonzalez emphasized that “we all want the same thing.”

“We all want to make sure that we have a job tomorrow,” she added.

Sure would be great if there were some salary, benefits, and pension #s, along with comps for similar jobs in local industry.

Perhaps notable that all the food service in the UCEN is now contracted to franchises which skate on all labor laws. 25 years ago all food prep at UCEN was done by folks who got real benefits and pension.

The only people who can afford to live locally are senior administrators and senior faculty. Perhaps the decades of anti-housing politics contributed to by UCSB students is related to that problem.

How is a one day strike going to convince anyone of anything? They know when it’ll start and when it’ll end. Why not go on permanent strike? Are you all really so useless that the University would find it cheaper to fore all of you and hire a new employee base? If so, then you’re not really in a position to bargain. If not, then strike indefinitely. Take a risk, make UC “feel the hurt.”

Not everyone can afford to strike indefinitely, anyone with any bit of compassion or critical thinking can come to that conclusion. This one day strike does a lot more than you would think especially since it is a statewide strike accross all UC’s. There are other methods and tactics that the union is doing to combat the unfairness of what is going on. Heard of ACA 14? Look it up, they worked on this bill and are trying to pass it as well so that all employees with the same job description get equal pay and ultimately ends outsourcing.

I worked at an AFSCME controlled hospital. I felt so sorry for the patients. It was a daily struggle to find employees who would actually work. It seems like most of their time was spent avoiding working and calling the union, if anyone suggested that they actually do their jobs.