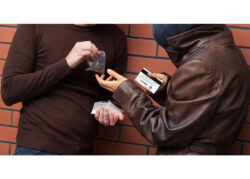 Everyone knows someone who has been affected by the university’s arcade token analog and Bitcoin-ripoff, Gaucho Bucks. Who could forget the June realization that there is an unredeemable $400 on your Access Card which will force you to buy out the Arbor’s supply of Yerba Mate and Takis?

“Oh, that system is an absolute scam,” said an anonymous UCSB staff member. “We prey on parents who don’t trust their kids enough to give them straight cash.”

In a truly revolutionary and visionary move, local drug dealer Schmad Anderson is informing all his potential clients of a new way to get rid of that useless virtual currency: buy his drugs. That’s right, Anderson is now accepting Gaucho Bucks.

Anderson’s new business plan hits an underground market that desperately needs service: car-less, jobless freshmen. Freshmen who have been left behind by the Gaucho Bucks system.

“They advertised it as a credit card I could take anywhere in Isla Vista,” freshman Francine Torreira said. “I almost starved the first week because every restaurant said, ‘Oh, we don’t take that,’ when I showed them my Access Card. It was bullshit. Thank god for Schmad. Now I can buy all the Adderall and ketamine I want with my parent’s money!”

Despite the Gaucho Buck to U.S. dollar conversion being roughly 1.00 to 1.00, Anderson has been charging double the price he would be charging if he were accepting cash. Even with this bold surcharge, business has still been steady.

So what’s next for our visionary young entrepreneur? Global domination.

“Right now, I’m looking into taking Gaucho Bucks onto the open market. They’re saying it’s the next Bitcoin. I also have an interview with Forbes tomorrow, but I don’t know if I can make it because I have a midterm later this week.”