The Daily Nexus
Opinion
Argument in the Office: NorCal vs. SoCal
November 14, 2019 at 8:00 am by Marko Ristic and Veronica Vo

Why SoCal is the Best Cal

When Katy Perry said “nothing comes close to the golden coast” in her hit single “California Gurls,” it’s obvious she was talking about Southern California. SoCal is the stuff movies are made of, home to beaches like Laguna, Santa Monica, Venice, Newport, Huntington… the list goes on. At these beaches, it’s possible to swim, scuba dive and tan to your heart’s content. The palm tree-studded streets, postcard-worthy coastline views and amazingly warm climate are just some of the features that make it the more enjoyable half of California.

You can never get bored living in Southern California — the sprawling urban environment of the Los Angeles area offers so much to do and see. It is a hub of cultural fusion, with vibrant destinations like Koreatown and Little Tokyo. On your way to the historic Hollywood sign, you might even run into a celebrity or two, or attend a TV show taping. Los Angeles, after all, is the most star-studded city in the world, since so many movies are filmed in the area. You could also go for a stroll along the gorgeous Santa Monica Pier, where you can spend your time doing anything from riding the Ferris wheel at Pacific Park to testing your Skee-Ball skills at Playland Arcade. Driving down Pacific Coast Highway will give you the scenic Californian road trip you’ve always dreamed of. A weekend getaway to Palm Springs or even a quick trip to Beverly Hills’ Rodeo Drive for some window shopping provides a break from the stressors of everyday life.

There’s something for everyone here. Interested in art? SoCal hosts a plethora of museums like the Los Angeles County Museum of Art (LACMA), the Getty and The Broad, to name a few. These are great places to take pics for the ‘gram. Additionally, the Carlsbad Flower Fields, Griffith Observatory, Balboa Park and Joshua Tree National Park are just some examples of other ideal photo opportunities for aspiring influencers to show off their picturesque SoCal lifestyle. The Bay Area, of course, is home to the iconic Golden Gate Bridge, but the wind, fog and lack of natural lighting can make the perfect picture hard to capture.

What about animal lovers? The gold standard of zoos can be found right in downtown San Diego. A vast array of cageless exhibits allows visitors to see animals while walking through artful landscapes and other unique attractions. The Aquarium of the Pacific and SeaWorld are some of the top locations to visit sea animals in Southern California. If you prefer to see them in their natural habitats, La Jolla Cove in San Diego is the go-to for watching cute sea lions sunbathing on the rocks.

SoCal is also brimming with renowned eateries and worldwide dishes, from authentic Vietnamese food in Little Saigon to the abundance of Asian restaurants and boba shops in Irvine. Southern California is also where you can find some of the best Mexican cuisine in the nation, with real Mexican food one road trip away if the foodie in you is feeling adventurous.

Anything that happens happens in SoCal. Festivals like the one and only Coachella are held in Southern California, along with fairs like the Orange County Fair and LA County Fair. Conferences for interests of all kinds, whether it be comics, YouTube or anime also take place here. SoCal hosts almost all the awards shows including the Academy Awards, Grammys, Oscars and Golden Globes. Not to mention, concerts by the biggest artists of our time are always happening in local SoCal venues such as the Hollywood Bowl.

During spooky season, many SoCal natives flock to Universal Studios for Halloween Horror Nights or Knott’s Scary Farm. Don’t forget that the happiest place on Earth can also be found in Southern California. Disneyland, located in Anaheim, is one of the world’s most famed amusement park sites and is a source of nostalgia and good memories for people all around the globe.

Last, but certainly not least, our very own town, Santa Barbara is located in Southern California. Downtown SB has much to offer, including scenic State Street, lined with charming white stucco buildings and a number of cute boutiques and restaurants. Stearns Wharf is also a historic pier with lots of great additional dining and shopping options. The city is surrounded by the beach, its sunsets are the eighth wonder of the world and it’s home to UC Santa Barbara. SoCal represents everything good in the world — the other half of the state really can’t compete.

Veronica Vo believes Bay Area inferiority rests on the fact that her opponent Marko, who eats his pasta unseasoned, is from there. 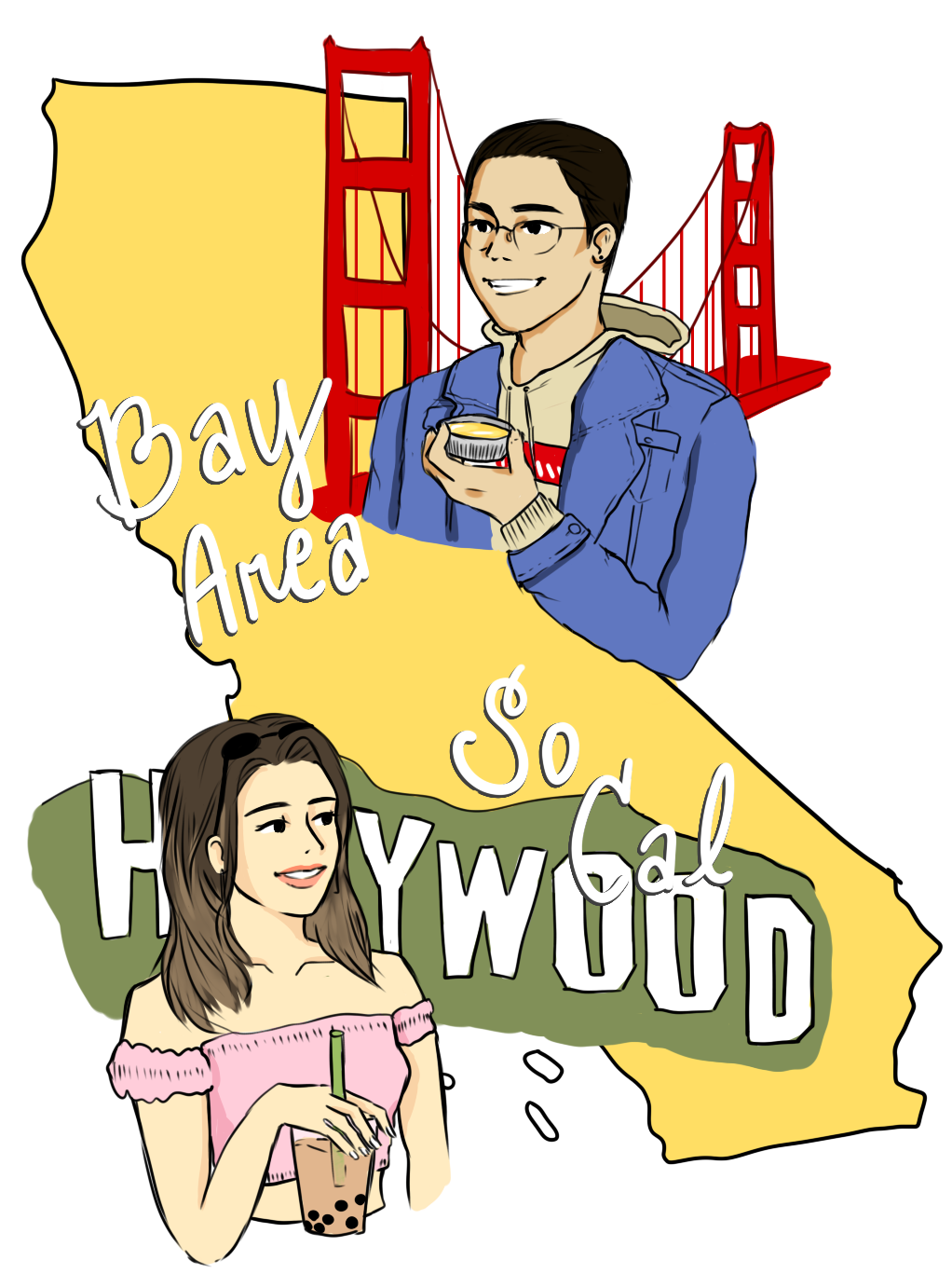 Boba, the Bay and Why LA Absolutely Sucks

“Aye, good looks. Tryna cut cut, or go to T4? They got hella options now, shit slaps on moms.” “T4? Fasho.” The vernacular of a Bay Area native such as this specimen can be difficult to understand, so let me serve as a translator. “Good looks” is the equivalent of a good job, “cut cut” is synonymous with going home, “shit slaps” just means it’s really good, “on moms” signifies that one believes what they say so much, they would put their mom’s life on the line to prove it and “fasho” is simply a lazy way of saying “for sure.”

Let’s be honest with ourselves: Doesn’t this lingo sound just a little cool? As if deep-down, a small, fashion-forward voice within yourself is whispering to you, “We should talk like that.” I agree — you should.

The Bay Area is a place like no other, unrivaled in its vernacular, abundance of boba tea shops and vibrant art scene, all of which can be witnessed in a five-minute walk through San Francisco. Now, you may be thinking: Marko, aren’t you biased because you’re from the Bay? You would be absolutely correct. But even taking a more objective approach, you will clearly see why the Bay is undoubtedly superior to LA.

Let’s start by looking at some of the basics. Although Los Angeles may have a lower cost of living than downtown San Francisco, there are many more places in the Bay that aren’t SF: Richmond, Oakland and San Jose all have cheaper living alternatives than LA. Additionally, the Bay, thanks to Caltrain and BART, has set up a complex and cheap public transport system, one which prevents a phenomenon similar to LA’s abysmal traffic.

Second, let’s compare the food. Yes, LA is home to trendy, basic, Instagram-popular restaurants, but how good does all that aesthetically pleasing food actually taste?  Despite its lack of trendy food spots, the Bay is home to a variety of great-tasting restaurants. A melting pot of different cultures, the Bay offers food options that are as diverse as the people that reside there — nowhere else can you find such a variety of restaurants to choose from.

Lastly, and most importantly, Bay Area culture is far superior to that of LA. Am I in any way qualified to talk about LA culture? Not in the slightest. Am I going to do it anyway? At this point you should know the answer is most definitely yes. Like I mentioned earlier, the Bay is home to a myriad of diverse people from different backgrounds, and although LA undoubtedly has its fair share of diversity as well, it’s hard to compete with the Bay’s Asian hypebeasts obsessed with Palace’s latest drop; the up-and-coming SoundCloud rappers with their distinct Bay Area sound; the beach bums that wake up at 5 a.m. to go surfing; or even the high-profile business executives who travel 30 minutes out of the way just to get their made-to-order Philz Coffee. This diversity plays a major role in not only the variety of cultures that exist within Bay Area natives, but also the variety of ideas shared and discussed as well. The Bay is a place that values discussion, and as such has fostered an environment where discourse and creativity are celebrated.

The Bay is unique — not just in its colloquialisms and boba shops, but also in its people and ideas. From SF to Santa Cruz, the Bay is truly one of the most multifaceted places in the world. Meshing the unique and uncommon histories of the people that live there with the plethora of tech startups and social advocates working toward the future, the Bay combines the best of both worlds, creating a culture that is truly like no other.

Marko Ristic would like to clarify that he does not eat unseasoned pasta.

Marko Ristic
Marko Ristic is an opinion staff writer. He is constantly sick (both physically and as a form of teen slang).

Veronica Vo
Veronica Vo is an opinion staff writer and a second year psychology major. She prides herself on her extensive collection of earrings and Studio Ghibli movies.

SoCal is where it’s at.