The Daily Nexus
Opinion
Argument in the Office: Can George Bush and Ellen Really Be Friends?
November 13, 2019 at 2:17 pm by Jordan Curiel and Tali Braun

A photograph was taken of Ellen DeGeneres sitting next to former U.S. president George W. Bush at a Dallas Cowboys game. When Ellen commented on the photograph, stating that the two were friends, a Twitter rampage broke out.

In a time when divisive politics consistently makes an appearance in our everyday lives, this was a refreshing moment. Seeing a feminist, LGBT icon and a former Republican president set aside their political differences in the name of friendship sets an example for the rest of us. DeGeneres brilliantly shifted the ensuing Twitter storm into a teaching moment about kindness.

DeGeneres brilliantly shifted the ensuing Twitter storm into a teaching moment about kindness.

She compared her being friends with Bush to her being friends with someone who wears fur when she firmly believes that nobody should be wearing fur. In other words, it is okay for friends to hold differing opinions. In fact, to fully embrace ideological diversity we must accept these differences and set them aside.

Political preference might be one of these differences, but why should it define whether or not we are permitted to be friends with a person?

I always hear cases of people outwardly expressing their allegiance to one political party or another and losing friendships as a result. If someone was friends with you for years, why should a statement of political affiliation make you “unworthy” of their friendship?

As an iconic figure in the public eye, for DeGeneres to acknowledge her friendship with Bush is brave. She knew that she would receive backlash, but rather than dismissing the photograph, she used it to talk about civility.

Afterwards, on her show, DeGeneres read the audience a tweet that she loved. It said: “Ellen and George Bush together makes me have faith in America again.”

Tali Braun believes we must set aside our political differences and just be friends. 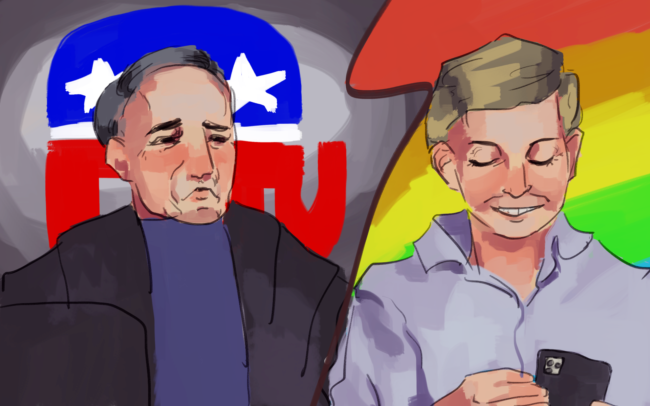 I’m all for peace. I’m all for compromise and understanding and empathy. I firmly believe that there are at least two sides to every argument, and disagreeing with someone else’s side doesn’t constitute going to war. But I don’t really think George W. Bush and Ellen DeGeneres should be friends.

A widely defamed proponent of the right wing and an influential feminist LGBT comedian are not exactly birds of a feather. Plenty of unlikely pairs have gone on to become dynamic duos — it’s the plot of almost every romantic comedy and crime drama ever written. However, I don’t see this one going down in history as a gap-bridging friendship.

As a matter of fact, I don’t even like the word “friendship” being used here, and that’s all I’m trying to say. You can be amicable without being friends. Calling someone a “friend” implies a certain level of support and loyalty that can transcend opposing beliefs. But can the fundamental difference in beliefs between these two ideological figureheads really be dismissed that easily?

But can the fundamental difference in beliefs between these two ideological figureheads really be dismissed that easily?

Any bridge built across a chasm that wide would be too weak and too thin to support the possibility of DeGeneres and Bush meeting in the middle. Somehow I just can’t wrap my head around the same woman who was Dory in “Finding Nemo” being totally chill with a former president who (allegedly) committed war crimes.

I understand that some people out there are probably upset for the exact opposite reason: That an openly gay woman with her own TV show might be imposing her liberal agenda on a former world leader. That’s cool, but I still disagree with that side.

I hold liberal ideals. I believe in equal rights. I support feminism. I do not enjoy the implications of a friendship between an iconic woman I’ve looked up to for so long and a man I’ve only ever known as a harm to our country.

DeGeneres going on national television and talking about her “friend” George W. Bush is a brave and mature thing to do, and it attests to the many reasons I adore her. But while her heart was in the right place, I do not think she realized that this was more than just a reach across the aisle — it was a testament to her opinion of Bush’s character.

Word choice matters, and in this instance, I really believe “friend” was the wrong one.

Jordan Curiel strongly believes in the idea of amiability without forcing friendship.