On Monday, Oct. 28, Todd Oakley’s lab invited Matt Davis to speak on his research into the evolution of ray-finned fishes in the deep sea.

The seminar, “Evolution in the Dark: Habitat Transitions and Adaptations in Deep-Sea Fishes,” held in the UCSB Marine Science Institute Auditorium, focused on the interspecies variation found in ray-finned fishes within the pelagic zone. 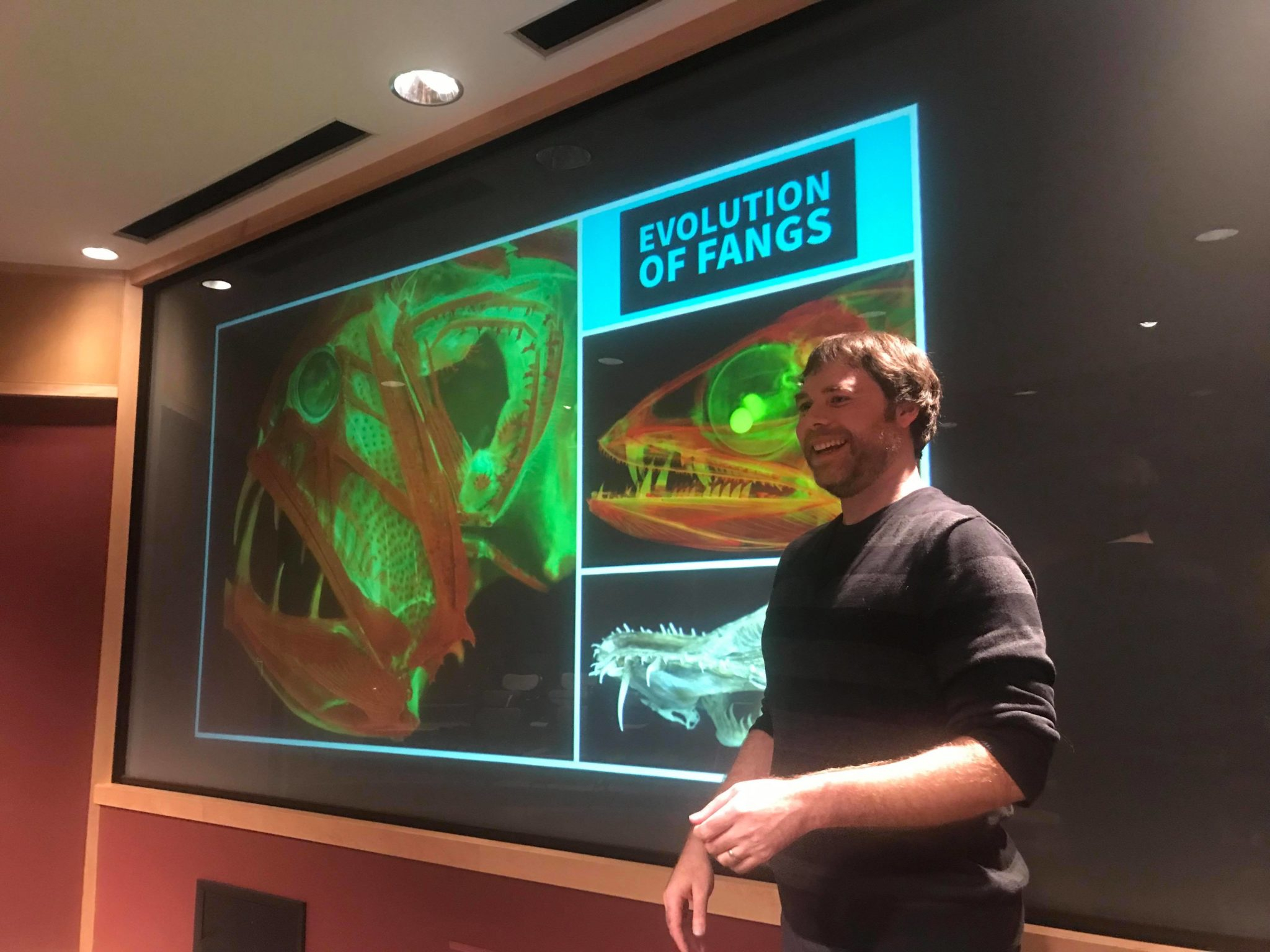 Davis, an associate professor of biology at St. Cloud State University, began with an overview of the varietal taxa of ray-finned fishes found in the deep sea before delving more specifically into the traits which characterize them.

He made note of the degree of convergent traits observed in deep-sea fishes, namely enlarged dentition and bioluminescence, which have evolved independently in several different lineages.

Specifically with regards to bioluminescence, Davis spoke on the independent mutations of bioluminescence across the ray-finned fishes that were studied, reflecting on the variety of anatomical structures and mechanisms associated with the common function.

A thorough examination of the ray-finned fish tree of life revealed the independent evolution of bioluminescence occurring over 27 different times, a higher number than initially thought.

Bioluminescence mechanisms in deep-sea fish can be classified according to how bioluminescence is achieved. Some species develop symbiotic relationships with bacteria, evolving different structures and pouches associated with the storage of these bacteria, while others exhibit intrinsic bioluminescence, in which emission of light is achieved without the symbiosis of bacteria.

“The mechanisms for why bacteria are stored and say their lure or how they’re getting nutrients or things is less well known. There’s still a lot of work to be done on some of these particular systems,” Davis said.

Davis and other researchers were interested in the varying uses which ray-finned fishes had for mechanisms of bioluminescence, including communication, predator avoidance, prey attraction and counterillumination, a function common in pelagic lineages.

Lanternfish in particular were useful study subjects, inhabiting an area of the ocean with no physical barriers to gene flow alongside another lineage of bioluminescent fish.

“They’re one of the more abundant [fishes] in terms of biomass. But in terms of species diversity, they’re actually quite depauperate, and the general trend here … is that when we look at fishes that use bioluminescence for communication, we find repeatedly that those lineages have elevated rates of speciation,” Davis described.

In contrast, bioluminescent fish using the ability predominantly for camouflage and other non-communicative functions did not show elevated rates of species diversification.

Another point of discussion was the histological work done to better understand the tissues associated with bioluminescence. Ongoing research is honing in on the “more unknown bioluminescent systems” across fish, such as deep-sea swallowers, according to Davis.

Davis also delved into the widespread incidence of enlarged dentition in ray-finned fishes that invade the deep sea.

Enlarged dentition was a trait observed in broad swaths of taxa and appeared much more frequently in deep-sea fish compared to organisms of other marine and freshwater taxa. Davis and his research team determined that there have been at least 36 different independent evolutions of fang-like teeth across 66 different families.

“Oftentimes when you talk to somebody about deep-sea fishes, one of the first things they say is, ‘Oh yeah, they’re hideous. They have huge teeth,’” Davis said. “There’s a few different reasons for that.”

Davis posited selective pressures found in the deep sea, such as the necessity for predatory fish to restrain prey items, which may explain the frequency of enlarged dentition and justify the investment necessary to develop such features.

After describing the incidence of those two convergent traits in ray-finned fishes, Davis ended the seminar with the disclaimer that speciation and diversification are mechanisms acted on by many different variables.

“There’s never really necessarily one magic bullet … There are definitely different, different types of opportunities depending on different habitats and some of these gradients, but one thing I find really fascinating is that, on the macroevolutionary scale, there really is no one answer.”