The Daily Nexus
News
Student Organizations Hold Demonstration in Arbor in Solidarity With Survivors of Sexual Assault
November 2, 2019 at 8:24 pm by Sanya Kamidi and Katherine Swartz

In light of the recent sexual assault allegations at fraternity Sigma Pi, a coalition of student organizations — led by UC Santa Barbara’s Intersectional Feminists — held a demonstration in the Arbor on Thursday in solidarity with survivors of sexual assault. 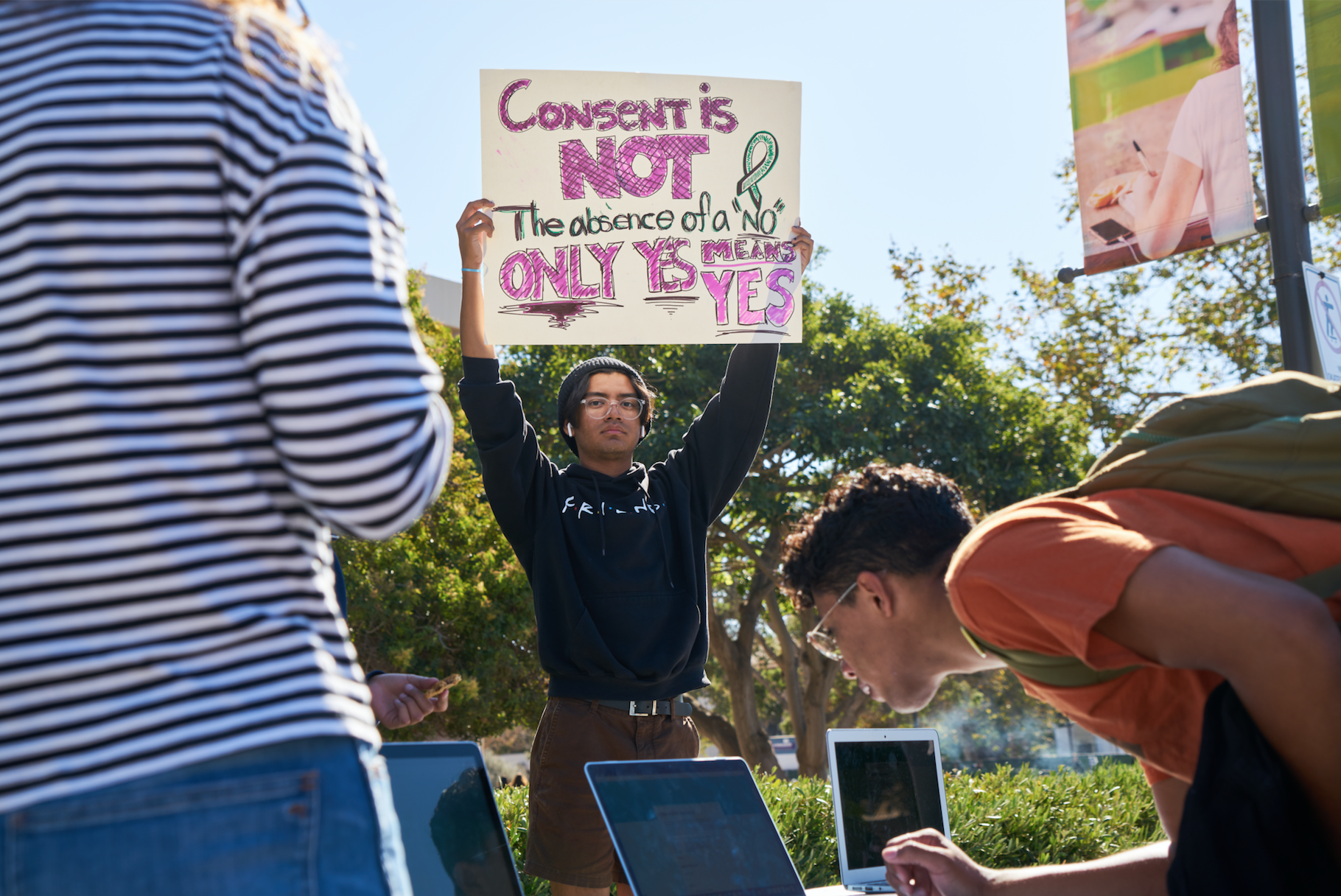 The event’s organizers were careful to emphasize that Thursday’s gathering was not a protest but instead a demonstration to support survivors and provide students with information about the resources at their disposal.

“We want to clarify that this is not a protest. We are not yelling out anything or being aggressive. This is a demonstration to SUPPORT and STAND with survivors,” the organizers wrote Wednesday night on the Intersectional Feminists’ Instagram page.

They originally planned to publish a list of demands for the university on Thursday morning that students would have been able to sign on to support at the demonstration.

In place of a list of demands, the organizers instead presented attendees with a Google Form that asked people their name and affiliation with UCSB or Isla Vista. The form also prompted them to answer the question, “What demands would you like to see be enacted on campus and in Isla Vista?”

“We really want to make sure these demands are representative of what the student collective wants,” Ulloa said, adding that they would most likely release the demands in about a week.

By the end of Thursday’s demonstration, the petition had received over 800 signatures, according to Diaz, who said they “don’t plan on closing [the petition] off anytime soon.” Despite not having a list of demands prepared at the Thursday protest, Diaz found “it’s better to get the input from the wider student populace before we finalize that list.”

“Just because of the volume of feedback that we’ve gotten, especially from the Google Form, we definitely want to take an appropriate amount of time to really comb through that and really take the time to incorporate that into whatever list gets made,” he added.

Dozens of students, some affiliated with participating organizations and some on their own, held up signs and talked to those walking through the Arbor about signing the petition through a QR code.

For second-year student Hannah Ezell, the decision to sign the petition was a simple one.

“I think it’s just important for everyone to participate … it’s yes or no; it’s a pretty clear answer of what needs to be happening, so I did it without question,” Ezell said.

Second-year economics major Devin Dohrmann also decided to join in solidarity, saying that he believed a misogynistic society is at fault for the recent events in Isla Vista.

“The more male voices which you have, I feel, the more likely other men are to listen to you, because the people who are committing these rapes are already being conditioned by a really misogynistic society to not listen to women,” Dohrmann said.

The organizers also emphasized the importance of creating an activist coalition through the demonstration. Over 15 organizations signed up to collaborate with Intersectional Feminists, including campus resources such as Campus Advocacy, Resources and Education (C.A.R.E.) and student-led groups like Students Against Sexual Assault (SASA).

For SASA, it was important to use the demonstration as a way to share resources that are available to survivors to help them navigate what they can do after being sexually assaulted, according to Francisco Trejo, a fourth-year biology major manning SASA’s table.

While Intersectional Feminists has taken the lead on putting together the demands, SASA has been figuring out “how much is actually feasible for the administration to implement,” Trejo said.

Two weeks ago, SASA met with several administrators to discuss the university’s response to the latest allegations of sexual assault, according to Trejo.

“We’re always in the process of figuring out what more we can ask of [the university] to do for the student body and how we can more effectively communicate with them,” he added. 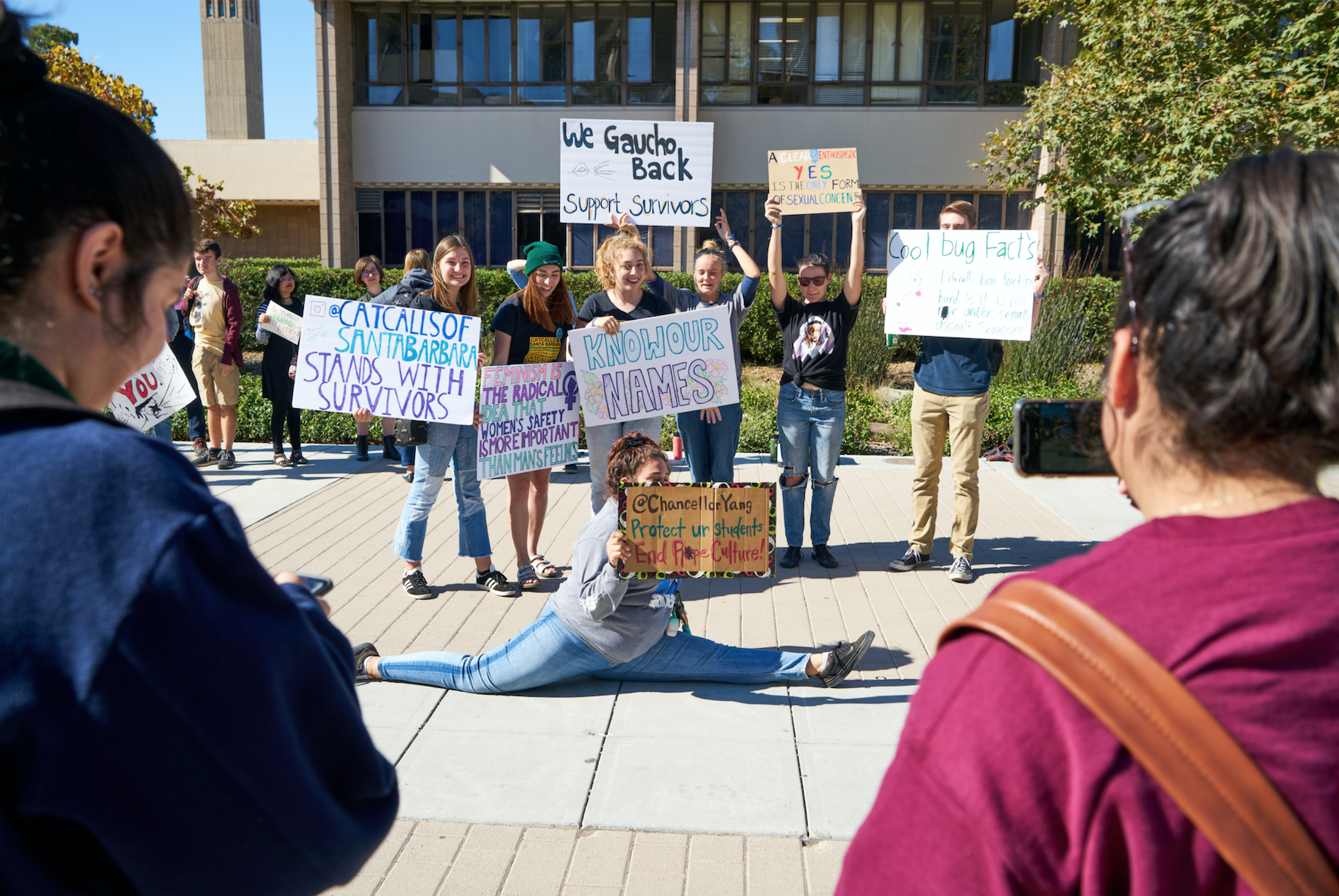 The Student Affairs administration will be holding a town hall next Wednesday, Nov. 6, from 5 p.m. to 7 p.m. in the Multipurpose Room of the Student Resource Building to address students’ concerns about the recent reports of sexual assault. Sicheng Wang / Daily Nexus

SASA is also partnering with C.A.R.E. to create a new prevention education curriculum, according to C.A.R.E.’s Assistant Director of Prevention Education Sven Rundman.

“We’ve been working with SASA to develop curriculum that we’re launching this year for all campus organizations … [and] also for Greek life as well.”

Planned Parenthood Generation Action, an on-campus organization that functions as a political arm of Planned Parenthood, was another student group that set up a table at Thursday’s demonstration with the intention of providing students with information about resources in the area.

“As a survivor, I want to show the resources that helped me at Planned Parenthood when I needed that support,” said Megan Ashley, third-year vocal performance major who represented Planned Parenthood Generation Action at Thursday’s demonstration.

Joan Hartmann, third district supervisor for Santa Barbara County and a representative of Isla Vista and UCSB, was originally only on campus to meet with Planned Parenthood Generation Action when she learned about the demonstration.

“I’m here because I want to stand with survivors and highlight the importance of this issue,” Hartmann said. “This is unacceptable, and we really need to change people’s minds about what it means to be a man in our society.”

Hartmann also applauded quick organization of the demonstration by Diaz, Ulloa and Youssef, and the large coalition of campus organizations that had come together in just a few days.

“This really speaks to one, the organizational abilities of those who put this together and two, how serious everyone takes [allegations of sexual assault] on campus,” Hartmann said.

Hartmann said she was also excited by the fact that the petition in circulation wasn’t just a set of demands, but an invitation for students to provide their input on what changes needed to be made.

Spencer Brandt ‘19, board president of the Isla Vista Community Services District, noted that it seemed as if the university was back where it was several years ago, when students held a sit-in in Chancellor Henry T. Yang’s office with a list of demands to reform the way the university addressed sexual violence.

“The frustration is palpable, to still be here three years later,” he said.

“In between now and then, we’ve had the #MeToo movement, which has brought a lot of issues of sexual violence and harassment into the national context,” he said.

Echoing Hartmann’s points, Brandt applauded the efforts of the students who put together the demonstration and the efforts of those who have pushed for conversations about addressing sexual violence on campus and in I.V.

“I think that what’s really important is that students are the ones who are leading this movement,” he said. “Students have come together and said ‘enough is enough’ before, and I think that’s what needs to happen again.”

In addition to the local politicians present at Thursday’s demonstration, several university administrators attended the event to show their support, including Margaret Klawunn, vice chancellor for student affairs, and Katya Armistead, dean of student life, who co-signed an email sent to all UCSB students Wednesday night regarding the recent sexual assaults and university communications with students.

“It took us a long time to get that statement out, and quite honestly, that hurts my heart,” Armistead said in an interview.

The Student Affairs administration will be holding a town hall next Wednesday, Nov. 6, from 5 p.m. to 7 p.m. in the Multipurpose Room of the Student Resource Building to address students’ concerns about the recent reports of sexual assault.

Youssef emphasized that she hopes the conversation around sexual assault will continue with administrators after the demonstration.

Further photos of the demonstration can be seen here.

There are a few horrible people in this world. Truly evil, I would argue that maybe there should be capital punishment for the most extreme cases of rape. However, the statistics don’t support an argument of existence of a widespread “rape culture” and the term itself is harmful to society. We don’t say there is a burglary, robbery, or assault culture. The pernicious actions of a few should not define an entire culture of society, as you would say with Islam. I am a male who was groped by a drunk girl at a party but honestly I did nothing… Read more »