The Daily Nexus
On the Menu
The Spookiest Treats on State Street
October 31, 2019 at 12:14 am by Rinah Anatalio

What’s better than donuts? Halloween-themed donuts! Located on State Street, Hook & Press Donuts — the city’s only artisan donut shop — have created new flavors for the season with fresh, local ingredients and have dressed some of their non-rotating flavors up for the holiday.

The first donut I tried was the Coastal Fog but was renamed ‘Ghostal Fog’ for Halloween. Ghostal Fog is a yeast donut with an Earl Grey glaze and adorned with a meringue ghost topper. If you’re a fan of floral-tasting treats, this is the donut for you. The earthiness of the tea balances out with the sweetness of the meringue and donut, not to mention the best decorated. Next up is the Horchata Crumb donut which is another yeast donut with horchata-flavored glaze and cinnamon streusel crumb. My favorite part of this donut was the crumb. The softness of the donut and crunch of the crumb made for a perfect balance of textures. I highly recommend pairing this donut with an almond milk latte. The horchata crumb was my favorite donut out of all of the donuts I tried. 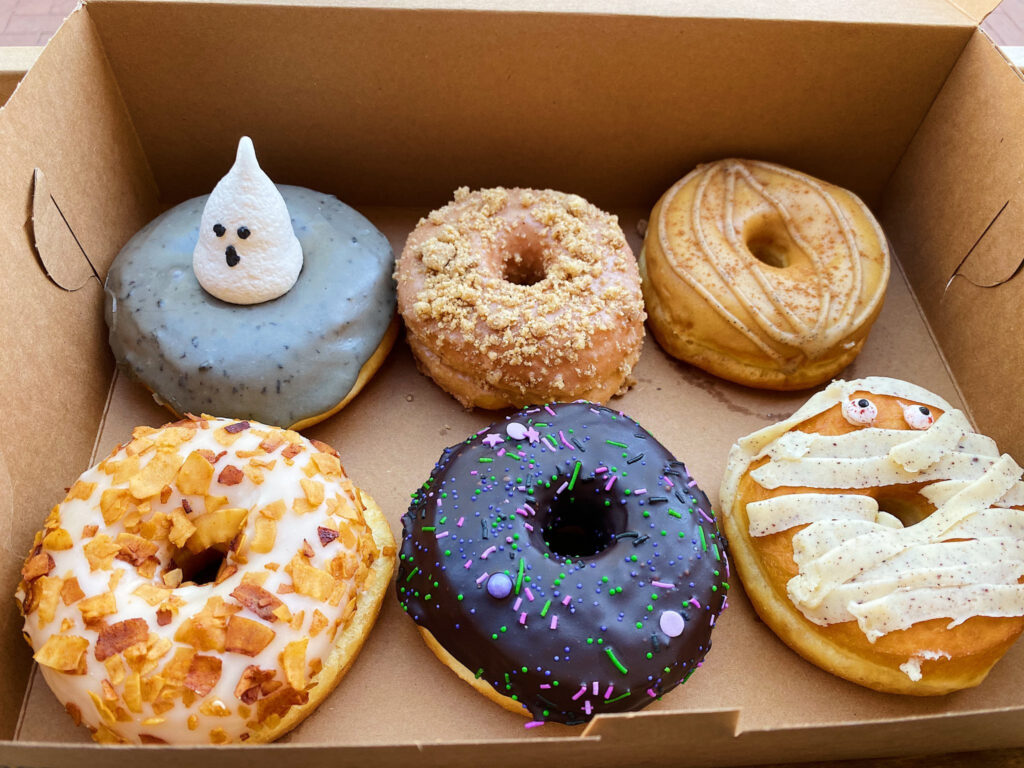 Additionally, I had the Pumpkin Spice Latte donut. This PSL donut is far from basic! The pumpkin spice glaze is adorned with cold brew stripes which make the donut look very aesthetically pleasing. Unlike most pumpkin spice-flavored treats, the flavor of the coffee is prominent, which I really enjoyed.

On the bottom left of the photo is the Maple Coconut Bacon, which is surprisingly vegetarian! The “bacon” bits on the donut are actually coconut flakes that were made to resemble the taste smoky and salty taste of bacon. The sweetness of the maple glaze and the saltiness from the coconut bacon balance each other pleasantly. The taste is reminiscent of when the maple syrup from your pancakes would mix with the bacon on your plate.

Another donut I tried was the Witch’s Brew donut. This donut is the classic Vanilla Bean Funfetti dressed up for Halloween. This donut is a fun spin on the famous sprinkle donut and looks great decorated with chocolate glaze and Halloween sprinkles.

The last donut I tried was the Browned Butter, which was renamed ‘Brown Mummies’ for Halloween. This donut had brown butter stripes with candy eyes, which added a nice touch. I particularly loved how the nuttiness of the brown butter balanced with the salt placed on top of it.

These Halloween-themed donuts will only be available until Oct. 31 so don’t wait too long to stop by! The seasonal flavors will be available until the end of the season but you can follow their Instagram @hookandpressdonuts for regular updates on their flavors