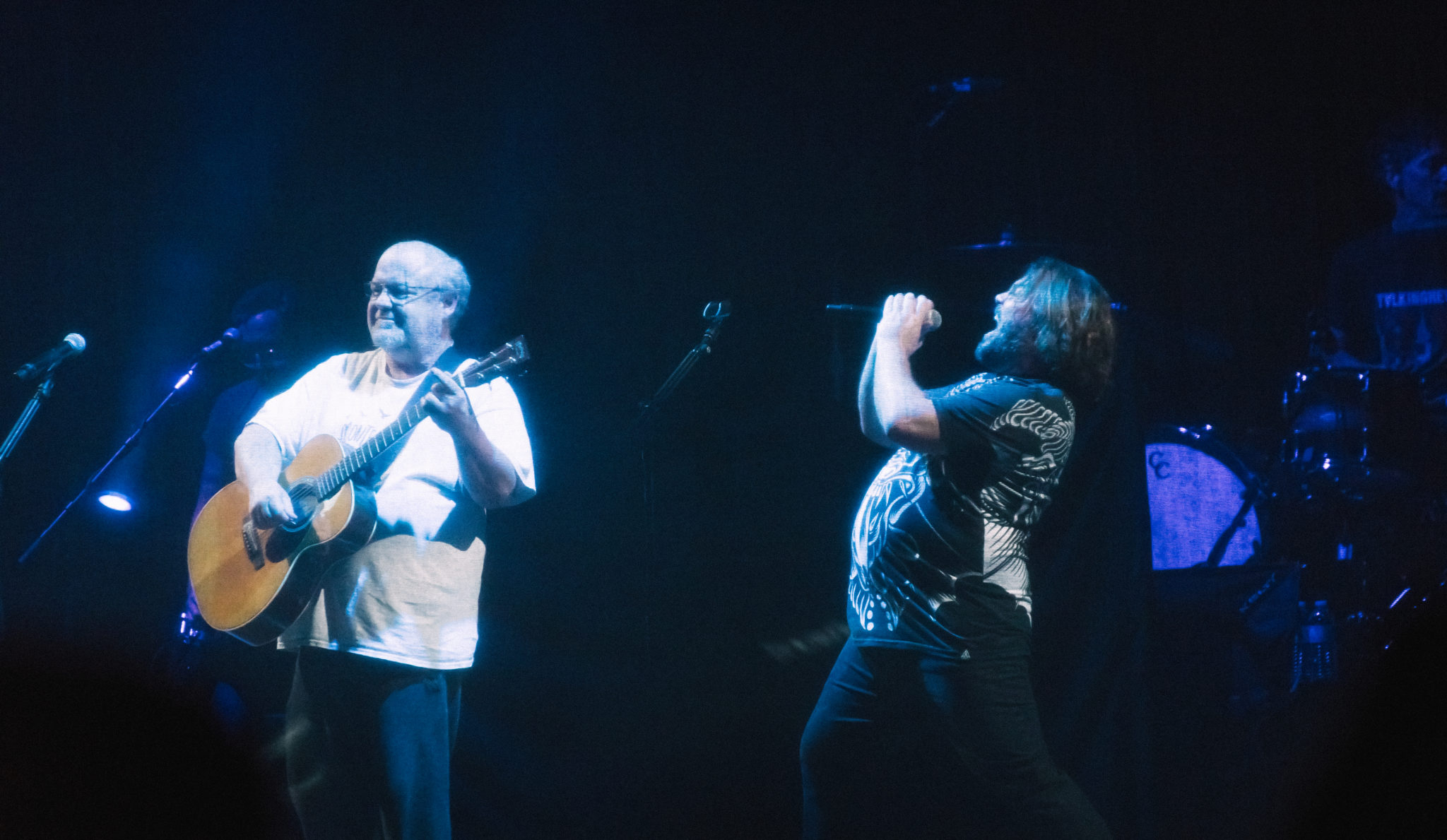 Laughter and cheers filled Arlington Theatre in downtown Santa Barbara as Tenacious D took the stage on Oct. 27 for the second-to-last stop of the Post-Apocalypto Tour. The band attracted fans of all ages, though the audience primarily matched the band’s middle-aged, stoner ensemble. The crowds filed into their seats as the lights went down, and chants of “D! D! D! D!” echoed across the floor and balcony, imploring the band to take their place on stage.

Tenacious D’s electrifying performance began with a 45-minute rendition of their online Youtube series, Tenacious D in Post-Apocalypto, which premiered on Sept. 28, 2018 and was followed by new episodes released every Friday. The six-part series, animated by Jack Black himself, was combined into one 45-minute-long show, as a giant screen shielded the band and projected the purposefully poorly-drawn movie over it. During the songs that accompanied each episode, a portion of the screen was animated while the band performed behind an illuminated sheer section.

The duo, comprised of Jack Black and Kyle Gass, formed Tenacious D in 1994, with their first debut album released in 2001. The five-leg tour was the band’s first in five years, with enough shows to compensate for their long hiatus. The announcement came with much excitement from fans all over the country, resulting in three sold-out shows overall. The D was backed by John Konesky on electric guitar, John Spiker on bass guitar and Scott Seiver on drums.

Arguably their most lewd song yet, “Making Love” makes “Fuck Her Gently” seem subtle. As the second song in the show, it set the tone for the audience and prepared them for the adventure they were about to experience. Vagina butterflies, an adolescent penis-monster named Crackalackadingdong and penis-tentacle balloons engulfed the stage while the crowd roared and heckled as they watched on. 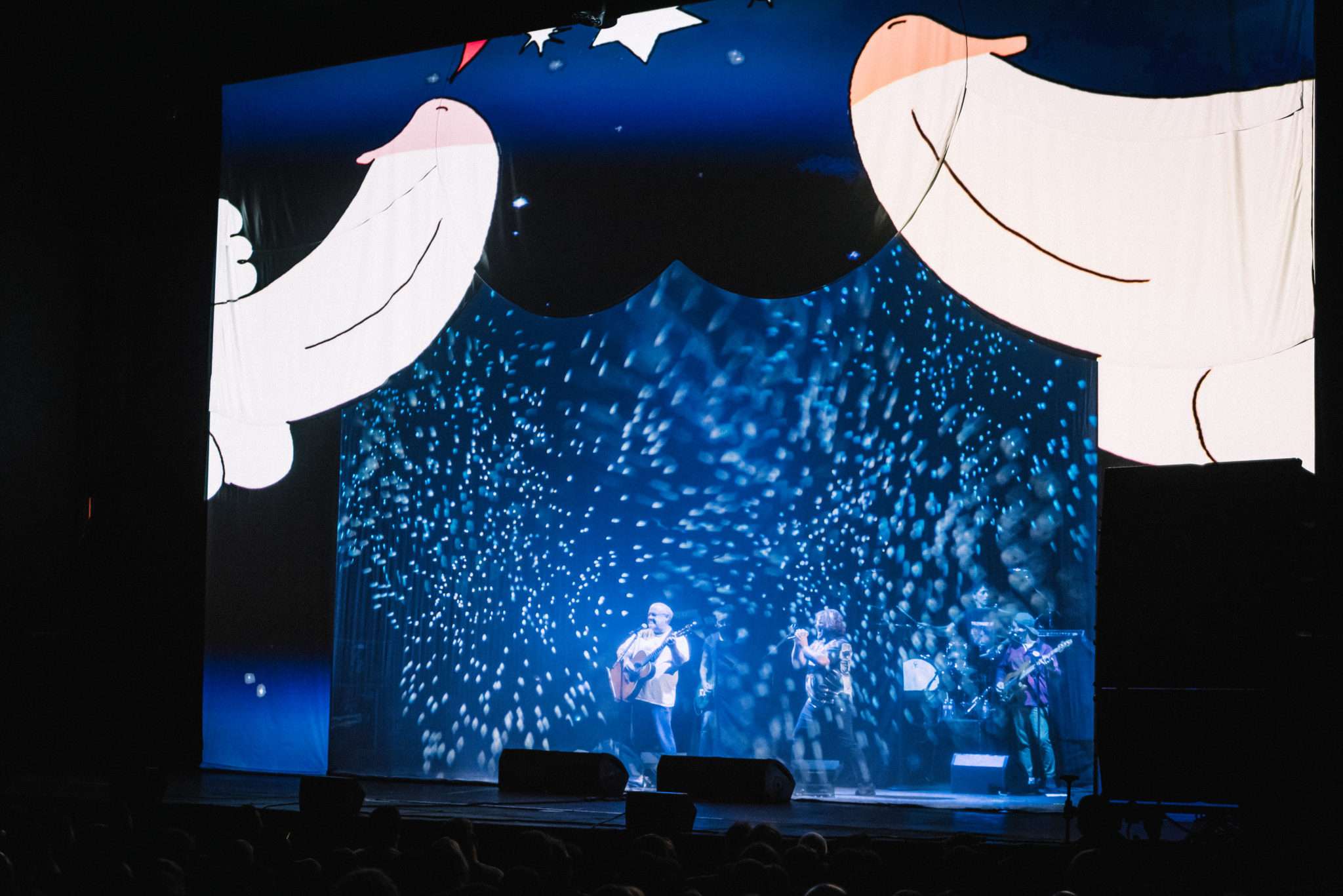 At the conclusion of the raunchy, comedic spectacle, the projection screen was lifted as Black and Gass approached the edge of the stage. The crowd erupted and jumped to their feet, while the band announced that they would now perform their “greatest hits.” This included the popular “Sax-A-Boom,” in which Black breaks out the trusty toy saxophone and demands that every person in the audience get up and dance with him. By the time he was sure his request had reached the balcony, the entire theatre was rocking out to his funky solo. “Beelzeboss” was lauded by the crowd for Konesky’s performance as Satan and for his surprising vocal capabilities. Following the song, a “fight” broke out between Black and Gass, with Gass storming off stage exclaiming, “I quit!” He returned halfway through Black’s solo performance of “Dude (I Totally Miss You),” and their re-kindled bromance was the perfect beginning to the band’s most popular song, “Tribute.” At this point, the entire audience was passionately shouting every word, and their energy fully transferred over to boost the band’s lively performance.

At the conclusion of the set, not a single person left the room as the audience chanted for the duo to return to the stage. Encores are not much of a surprise at most shows anymore, since performers typically already have them planned with the set list. The D, however, made sure to make the audience work for their presence, and it was clear that nobody in the crowd was ready to concede until they could all sway and serenade one another just one more time. The duo returned on stage after three minutes of consistent cheers and covered “Sunshine of Your Love” by Cream, providing an impeccable transition into “Fuck Her Gently.” 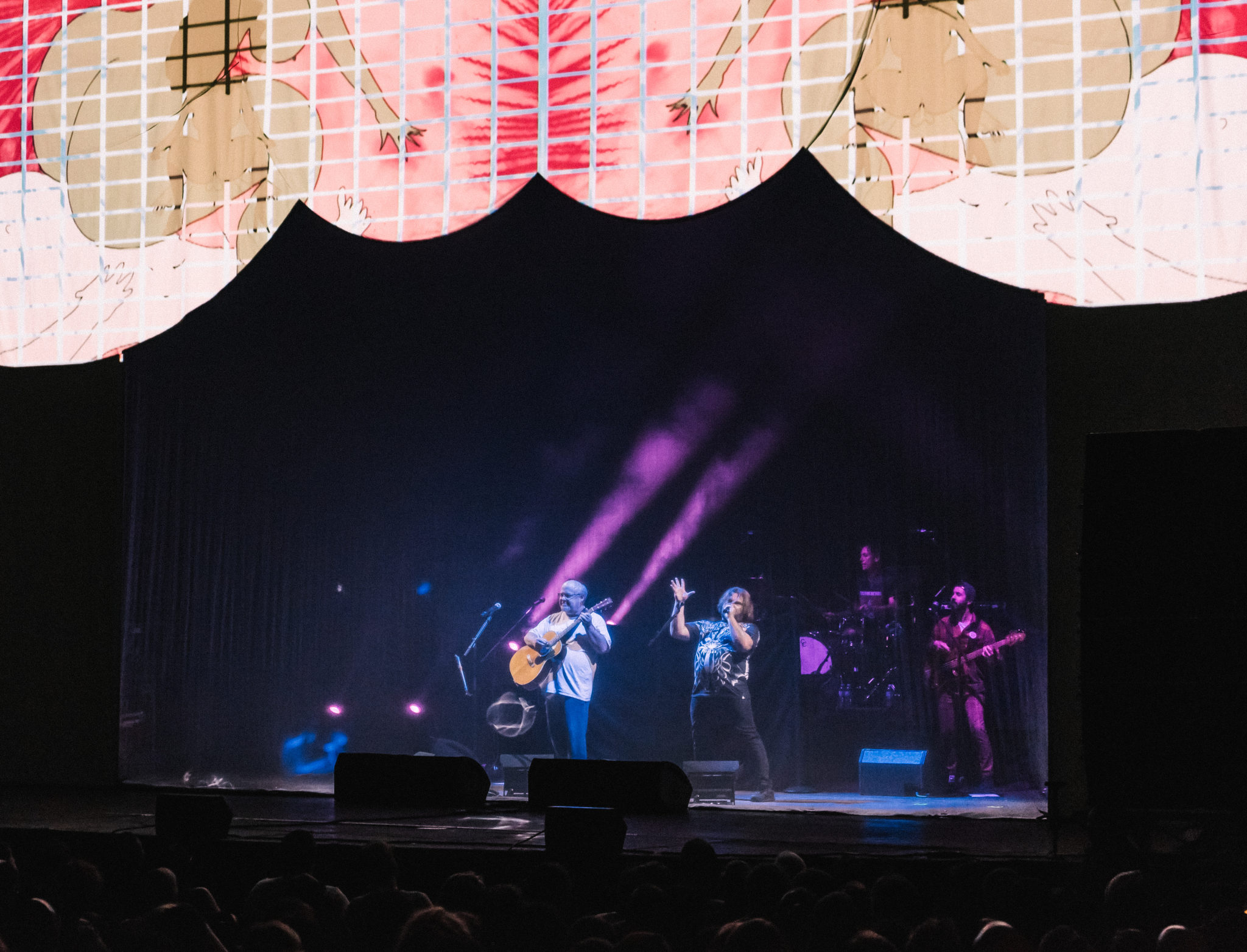 Black’s vocal ability has only seemed to get better with time, and Gass contributed to the dynamic vocals more than ever. Their long-running joke of being the “greatest band in the world” is not so much a joke as it is factual. Black may be better known for his comedy, and the lascivious nature of their songs definitely disguise the talent in their music. However, the musical ability is there and the lyricism, though raunchy, models advanced technique.

Remaining relevant over these past 17 years has had its hurdles, like when their feature film “Tenacious D in The Pick of Destiny” flopped at the box offices in 2006, but the movie quickly turned into a cult classic among many rock and metal fans. The musical-comedy style has prevailed with artists like Bo Burnham and the Lonely Island, but nobody has held up as strongly as the D has over the years. In total, Tenacious D in Post-Apocalypto received nearly 3 million views on YouTube, and the tour closed with a total of 51 shows in nine different countries. The duo resurfaced after many years, feeling inspired by the 2016 presidential election, and hopes are high for even more Tenacious D content in the works soon.