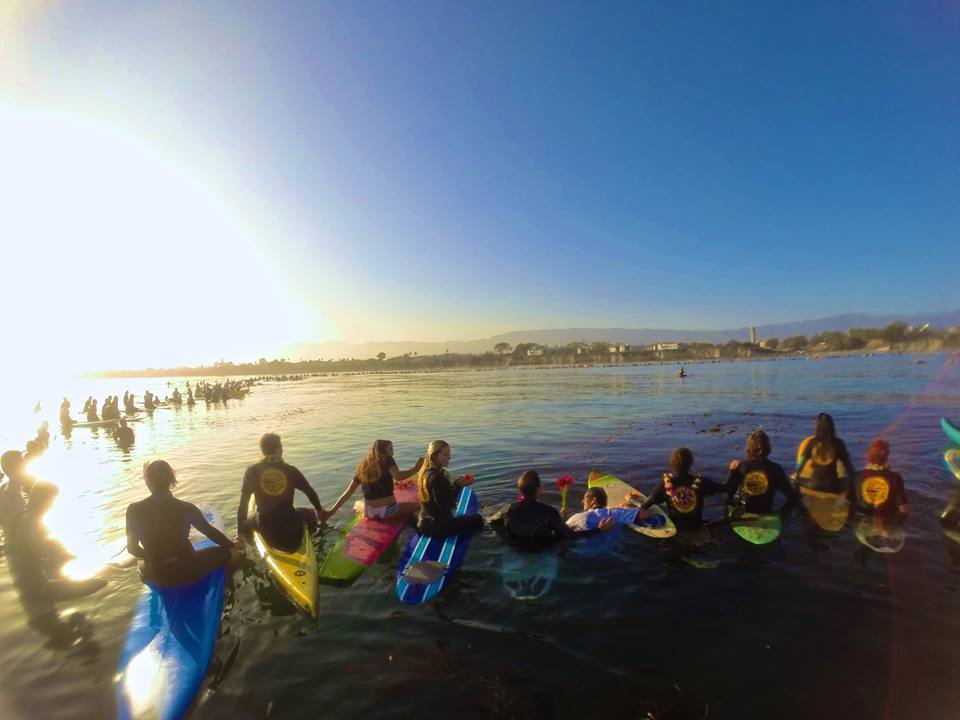 There is nothing UC Santa Barbara students love more than enjoying a sunny day in Isla Vista with good music, good vibes and good company. On Sunday the 20th, this was the exact experience that the UCSB Surf Team provided the Isla Vista community with their “Stoked N’ Broke” fundraiser.

The fundraiser was held at a house on Segovia Road in Isla Vista, where members of the surf team, their friends and anyone else who wanted to join came together to listen to five talented local bands and musicians perform: Closeout Band, Noise Complaint, Jakob Akira, Art Official and Skogen.

While watching the performances, it was clear that the audience was enjoying the music as well as the social, laid-back atmosphere. Gauchos hung out in the backyard mingling, enjoying time together and moving to the groove as the performers entertained them with their unique, varying styles. The majority of the musical genres played that day ranged from punk to the indie/rock realm, with each musician incorporating their different personal characteristics.

Band members Scott Marino and Aran Mazariegos from Art Official displayed great enthusiasm to share their music and put on an unforgettable performance. The formation of the band Art Official evolved out of both longtime friendships and finding new friends with common interests.

“I’ve actually known the drummer since fourth grade, and we played in jazz band. We played in a bunch of bands in high school and we really wanted to start a band,” Marino said. “We made our lead singer, Jakob, join because we figured he wrote music and sung.”

Marino continued to tell the story of how he and Mazariegos first connected in the De La Guerra dining commons at UCSB: “He sat down at my table and then we were just talking about music. We were just like, ‘Yo, I love funk music’ and ever since then…,” well, the rest is history.

Inspired by musicians such as Mac DeMarco and Peach Pit, Art Official describes themselves as part of the indie music scene, with a funk and jazz twist given their jazz background. When asked about their hopes for the band in the future, the musicians presented a humble and genuine appreciation for their art and the experience of performing. Describing their goals for Art Official, Marino said, “Honestly, keep playing I.V. shows, and play a lot bigger ones. We actually played our first show last night on DP and honestly, like, we just love doing that. We didn’t really form the band to record or play at huge venues; we just want to play for people who want to hear us.”

With so many diverse styles among the bands, the audience was constantly entertained with new and original music. Freshman mechanical engineering major Jake Morenc plays for both Noise Complaint and Closeout as a drummer and singer. Playing for two different bands allows Morenc to express his musical skill across different genres.

“Closeout is punk/reggae/hard rock and Noise Complaint is metal,” Morenc described of his two musical endeavors. After his last performance of the day, he shared some of the highlights of the event and what he enjoyed most: “My favorite part of today would have to be playing ‘Holiday’ by Green Day and seeing people jump out of their seats to start going crazy! People even started running out of the house ‘cause they heard the song.”

Judging by the audience’s response to Morenc’s performance, the band definitely knew how to work a crowd, which comes as no surprise given Morenc’s dedication to constantly being involved in the Isla Vista music scene.

“I’ve been playing shows in I.V. for the past three years, almost every single weekend,” Morenc said. “This one was a lot more laid-back than the ones I usually have, which was a good thing for today actually. I had a great time!”

Overall, the concert was not only a great way for the Isla Vista community to discover talented local artists but also to provide a substantial amount of support to the UCSB Surf Team as well. UCSB Surf Team President Shaun Tenansnow expressed his gratitude toward the bands and everyone who worked hard to make the event happen.

“The bands were super cool. They’re doing it pro bono, just doing it for free, which is pretty epic for us because we don’t have any money to spend on anything. It’s just $5 to get in which is a pretty mellow price to have a band party, and you’re helping out the surf team which is really helpful for us,” Tenansnow said. Both the team’s and the bands’ abilities to bring people together served as a prime example of the supportive community Isla Vista truly has.