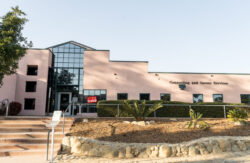 With collective pressure on California universities to better student health services, UCSB’s Counseling and Psychological Services program has launched a groundbreaking “See the Sunny Side!” initiative.

The proposed initiative aims to support students’ mental and emotional health and will input more depth and attention toward one-on-one therapy sessions.

Furthermore, C.A.P.S. therapists will begin to have more impactful conversations with patients, giving advice like: “Have you tried to take a walk outside?”; “Could you try to tell yourself a funny joke?”; “Did you already sit in the egg chair?”; and, “In the grand scheme of things, you actually don’t have it that bad.”

The initiative is receiving new patients, many of whom have been waiting years for C.A.P.S. care.

“After telling my therapist what was going on with me, the first thing she asked was, ‘Are you sure you’re sad, or maybe you’re just PMSing?’” student Ethan Hernandez said.

C.A.P.S. officials have also voiced their excitement with the “See the Sunny Side!” campus-wide posters, to be erected whenever the therapy session waitlist frees up. The posters, five 8-by-11-inch black-and-white printer papers, read “don’t be blue, be happy instead,” with a lovely addition of a stock photo flower.

“We’re really looking forward to furthering our crucial role here on campus,” Peterson stated while pinning one of the five posters onto a wall of Webb Hall’s basement. “It’s hard work, but someone’s gotta do it.”

Emma Demorest went to C.A.P.S. once and they told her she was actually fine!

But an ETHAN wouldn’t usually be able to PMS, unless…. ohhhhhh… that’s the joke…. Bravo Ms. Demorest