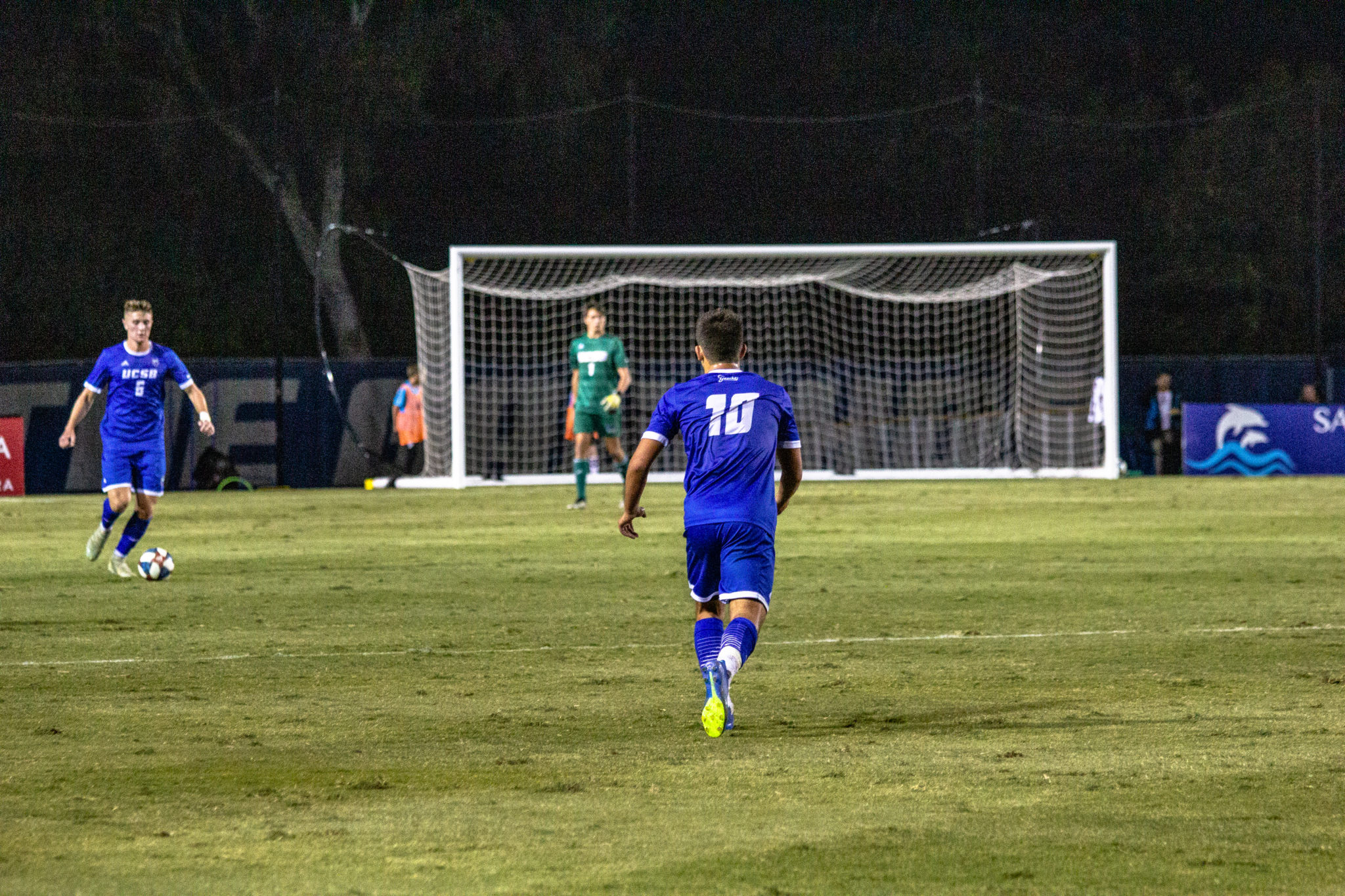 Two second-half goals by freshman phenom Finn Ballard McBride gave the No. 12 UCSB men’s soccer team its fourth win in a row on Wednesday night. The Gauchos took down the UC Riverside Highlanders 2-0 and extended their non-losing streak to 11 games.

UCR fell to a 1-2 conference, 6-6-2 overall record with the loss and now stands at sixth place in the Big West. UCSB claimed sole possession of first place with the victory and has a 10-2-2 overall, 3-0 conference record.

Although the Gauchos maintained possession for most of the first half, the Highlanders did a great job of staying back and breaking up any attacks in the final third. UCSB was able to continue to string together passes as the half wore on, yet the team actually put up less shots than UCR and no shots on goal in the first period.

“We weren’t really sharp enough, I thought, in the first thirty minutes,” Head Coach Tim Vom Steeg pointed out postgame. “We didn’t do enough to get a goal and that pushed us in the second half.”

A key move that helped bring some life to the UCSB offense was the insertion of junior transfer and forward Ameyawu Muntari in the 31st minute.

Muntari has been a spark plug for the Gauchos all year long in his first season with the team, using his agility and touch to get around defenders and produce offense out of nothing. In the 39th minute, the Ghanaian forward sent in a high-arching cross to a wide-open Rodney Michael in the box who headed it just wide of the goal, marking one of UCSB’s best chances in the half.

The Highlanders were not intimidated by the Gauchos at all, however, and in the 41st minute, a quick miscommunication between centerbacks William Gillingham and Hunter Ashworth led to UCR defender Jose Ponce receiving the ball in the box in prime position to score. His touch went just wide, however, and the Gauchos narrowly avoided giving up their first goal of conference play.

UCSB came into the second half looking like an entirely different team.

“All we really did at halftime was reorganize and collect our breath,” Coach Vom Steeg said. “We basically discussed what we were doing in the first half and going out there and doing it better.”

It only took seven minutes for the Gauchos to get on the scoreboard, and it just had to be attacking midfielder Finn Ballard McBride who knocked it home. The Australian freshman placed a Rodney Michael-cross into the bottom-right corner of the goal, just past the Highlander keeper’s gloves to break the tie.

“Tim [Vom Steeg] told us before the game that you gotta get numbers in the box,” Ballard McBride said after the game. “And once you get it wide and cross it enough times, there’s bound to be a mistake or someone open and you just gotta be at the right place to finish it off, and I was there.”

Rather than inspiring the Gauchos, the goal seemed to have an unintended effect, spurning the UCR attack. The Highlanders began to press and possess the ball as they reached the midway point of the half. Their attack culminated in a free kick in the 58th minute by Daniel Aguirre that took an outstanding effort from Gaucho goalkeeper Ben Roach to not see the back of the net.

Just as it seemed that the Highlanders were going to take control of the match, Ballard McBride struck again. In the 67th minute, senior defender Noah Billingsley sent in a cross from the right side of the field that floated seemingly out of reach of the freshman. Ballard McBride turned his body as he was falling away and blasted the ball into the upper left corner with his head, doubling the lead and essentially putting the game out of reach.

“I was coming in from the back post and saw the ball coming in the whole way through,” the midfielder explained. “Then I just got a clean connection with it, squared up my shoulders, put my head through it and it just flew in.”

Ballard McBride has scored in each of the Gauchos’ last four victories and has put in eight goals in total on the season, numbers that would be incredible for any player but are almost unbelievable for a first year. He is certainly a lock for the Big West Freshman of the Year Award and could possibly receive national recognition before the season is done.

The Gauchos will now look to keep the streak alive on Saturday night when they host the UC Irvine Anteaters at 7 p.m. at Harder Stadium.