The Daily Nexus
The Daily Stench
Asbestos in Ceiling Won’t Stop I.V. Rapper’s Mixtape From Being Fire
October 14, 2019 at 4:20 pm by Chace Duma 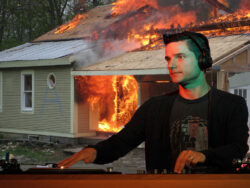 Popular I.V. rapper Lil’ Bestos has been preaching defiance after realizing that there is asbestos in his new I.V. apartment.

“When I heard that this ‘asbestos’ is a fire retardant,” Bestos said, shooting a glare at his ceiling. “I knew I had to step my game up. This was an attack on me, on my career … on my bars. These I.V. landlords don’t want your tracks to be fire. They don’t want you to win. And that’s a problem, because I want me to win.”

“The first thing I did when I learned I was living with a dangerous carcinogen was change my name, as anyone would. Then, I started cooking up my new beats. I knew they had to be fire … maybe even better than fire. Like, advanced fire. And there was nothing my ceiling could do about it.”

Lil’ Bestos’ new mixtape, “A$$bestos Bluez,” will be dropping on April 20, 2020 on all major streaming platforms (and GauchoSpace).

Chace Duma is thrilled about the asbestos in his ceiling.