The Daily Nexus
News
“She doesn’t know that she’s a sea lion and she doesn’t know where she is”: Unhealthy Sea Lion Spotted on I.V. Beaches
October 10, 2019 at 12:07 am by Katherine Swartz

Kyla Bazlen expected a Friday evening surf session at Devereux Beach to be just like any other but quickly realized something was off when she saw people crowding around a small creature lying on the shore.

It was a sea lion — and it didn’t look healthy. 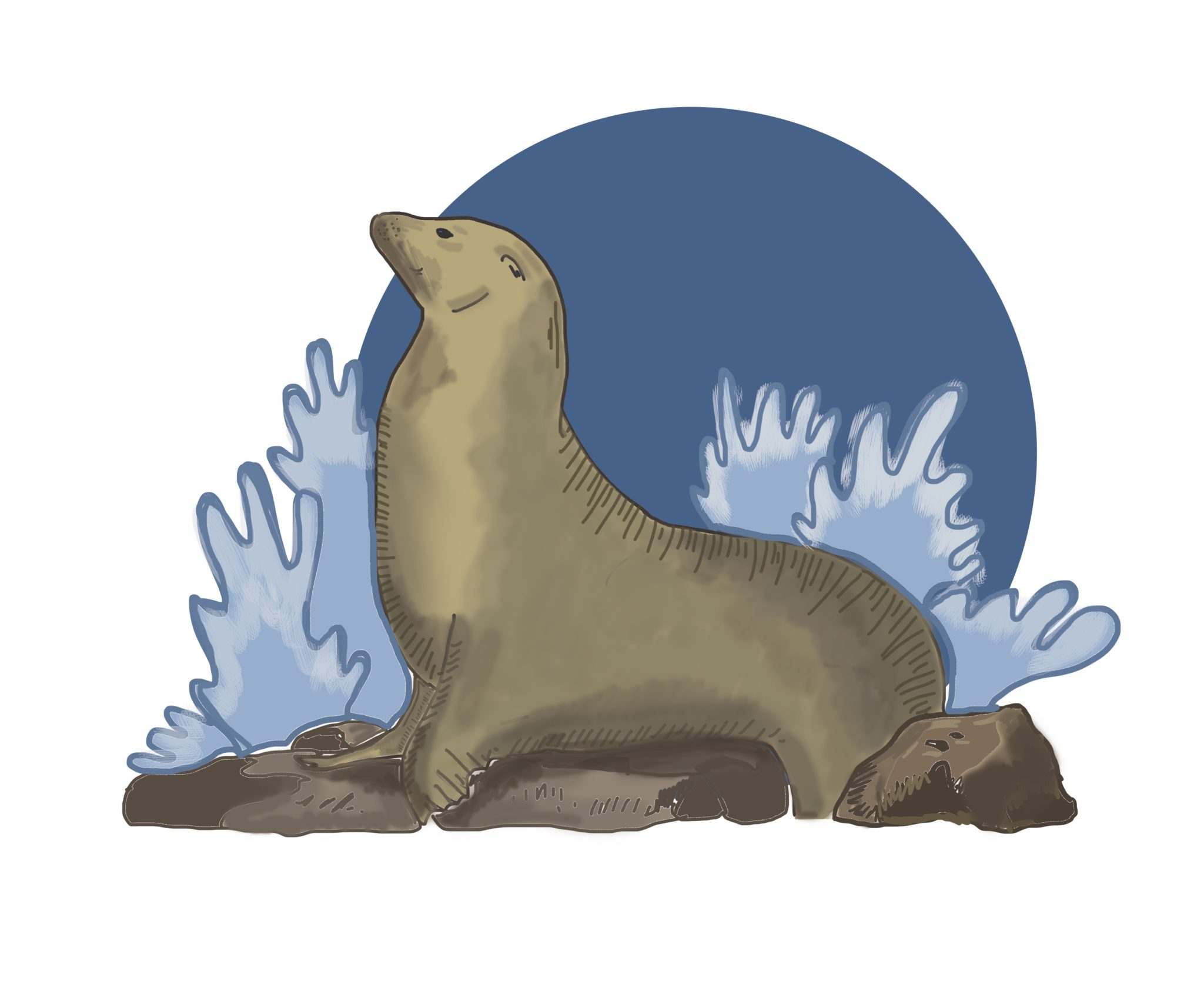 The sea lion was seen in multiple places across the Isla Vista beaches over the weekend. Britta Good / Daily Nexus

“People were getting super close to it, dogs were going up to it and it just wasn’t really reacting or acting like a normal sea lion, so you could tell it was sick,” Bazlen, a fourth-year environmental studies major, said.

“We could tell that the sea lion was not in great shape, lacking proper cognition maybe or perhaps paralyzed,” Rogers said. “We kind of just assessed the scene and tried to ask people to respect the sea lion and give it space and then we just immediately knew to call wildlife rescue.”

As Rogers would soon discover, the sea lion was seen in multiple places across the Isla Vista beaches over the weekend and was showing signs of domoic acid toxicosis, a chemical reaction affecting the brain produced by phytoplankton that causes “lethargy, disorientation, eye bulging seizures, eye bulging, unresponsiveness and inability to move out of the water and unresponsiveness,” according to the Channel Islands Marine and Wildlife Institute (CIMWI).

The sea lion that washed up on the I.V. coast this weekend is not a lone incident — CIMWI has reported a growing amount of affected marine mammals in the Channel Islands area due to climate change and agricultural runoff.

After Rogers saw the sick sea lion, she called 911, who then notified seal rescue and eventually CIMWI. Once the volunteer arrived to the beach a few hours later, he confirmed to Rogers that the sea lion was suffering from domoic acid toxicosis.

Domoic acid toxicosis starts at the bottom of the food chain, found among the phytoplankton called pseudo-nitzschia. Through biomagnification, the toxicity of this harmful algal bloom — a rapid growth of algae in a small area — becomes more concentrated in animals as it goes from krill to small fish and sardines to the California sea lion.

“[The volunteer] was describing to me how it literally shrinks the size of the sea lion hippocampi … and for the rest of the hour I just listened to him off the edge of my seat with my mouth hanging open,” Rogers explained.

When CIMWI gets a call about domoic acid toxicosis in animals, a volunteer arrives at the scene to assess the animal, but they usually keep the animal in its immediate surroundings instead of relocating to the rehabilitation facility in order prevent further disorientation. The sea lion is left “in a safety perimeter” and volunteers regularly monitor the animal’s condition, according to signs CIMWI posted along I.V. beaches over the weekend.

While domoic acid toxicosis seriously impacts the affected sea lion’s health, acute effects dissipate after 72 hours as the toxin works its way through the animal’s body.

The effects of domoic acid go beyond sea lion health on the Central Coast. Mussels and other shellfish feed on pseudo-nitzschia, which is potentially deadly to humans if they eat affected mussels.

“If we were to say, eat mussels that have been filtering and feeding on pseudo-nitzschia that happen to be toxic … we would pick up those toxins as well,” said Mark Brzezinski, professor of biological oceanography and director of the Marine Science Institute.

“That’s why when domoic acid levels are high, the shellfish harvesting is put on hold, because those could be poisonous.”

While studies clearly indicate a rise in domoic acid due to climate and human-generated issues, there’s not a simple connection between a changing atmosphere and preventing outbreaks of domoic acid.

As Brzezinski explained, the pseudo-nitzschia phytoplankton does not always produce the toxin, so researchers find it nearly impossible to predict when and where algal blooms will be toxic.

“Just because it’s in the water doesn’t mean it’s producing the toxin — that’s one of the frustrating things. We monitor the amounts of pseudo-nitzschia in the water every week; we take a sample on Monday, and by Tuesday we have the answer. But we also know that the relationship between the number of pseudo-nitzschia out there and toxicity is really poor. The numbers don’t predict toxicity. We can’t infer the toxic bloom just from the number of organisms out there, which is a little frustrating, but we have to be careful interpreting abundance data.”

Essentially, the same species can be toxic one day and not the other.

“It’s not known in a well enough way that, ‘This group’s going to be toxic and that group over there’s not.’ We’re not at that point. It’s one of the areas that people who do this full time are really focused in on, to try and understand that, because it’s a major gap in our knowledge.”

With any future sea lion sightings, CIMWI warns beachgoers to keep their distance even if the sea lion appears approachable.

But from what Rogers witnessed on the beach, it will take a lot of diligence for students to keep their space from rare close encounters with marine wildlife.

“I think that we live in a very voyeuristic society, particularly with the rise of like heavy documentation of our lives and the things we see. I’d be remiss to say it wasn’t connected to social media,” Rogers said. “But I also do think there’s a kind of benign interest in natural phenomenon, like with a growing disconnect between us and the environment and I think that people are interested in kind of bridging that gap for themselves.”

Rogers waited hours by the sea lion for CIMWI, telling students to keep their space. For her, the change from her daily routine was a reminder for her to remain active in the fight against climate change.

“I had a moment of reckoning where I was on my second hour of waiting for CIMWI and I was kind of like, ‘Okay, this is taking a long time, I’m dedicating a lot of time to this.’ I was questioning myself, does my emotional response to these kinds of things hinder me or is it a strength? Because I was feeling very drained by the fact that I was watching the sea lion and I didn’t know her fate and I was having this reckoning with myself.”

“I just hope that students hear this call-to-arms and remain helpful in order to be productive and when they feel this emotional hole to notice and bear witness to what’s happening in the environment. I hope that students follow the path of action rather than the path of denial and paralyzation and don’t let themselves be overwhelmed by what’s happening, but instead let themselves be motivated and kind of be sparked to action and to making change.”

Your emotional response is a great strength not a weakness. We need more people in the world that care as much as you do.