The Daily Nexus
News
Memes and Self-Deprecation: A UCSB Professor’s Key to the Belly Laugh
October 10, 2019 at 12:05 am by Max Abrams

“Why do you keep going to the beach?” a hysterical woman said in the first picture. “Bro I’m straight up not having a good time,” the mountain lion responded, unenthused, in the second. 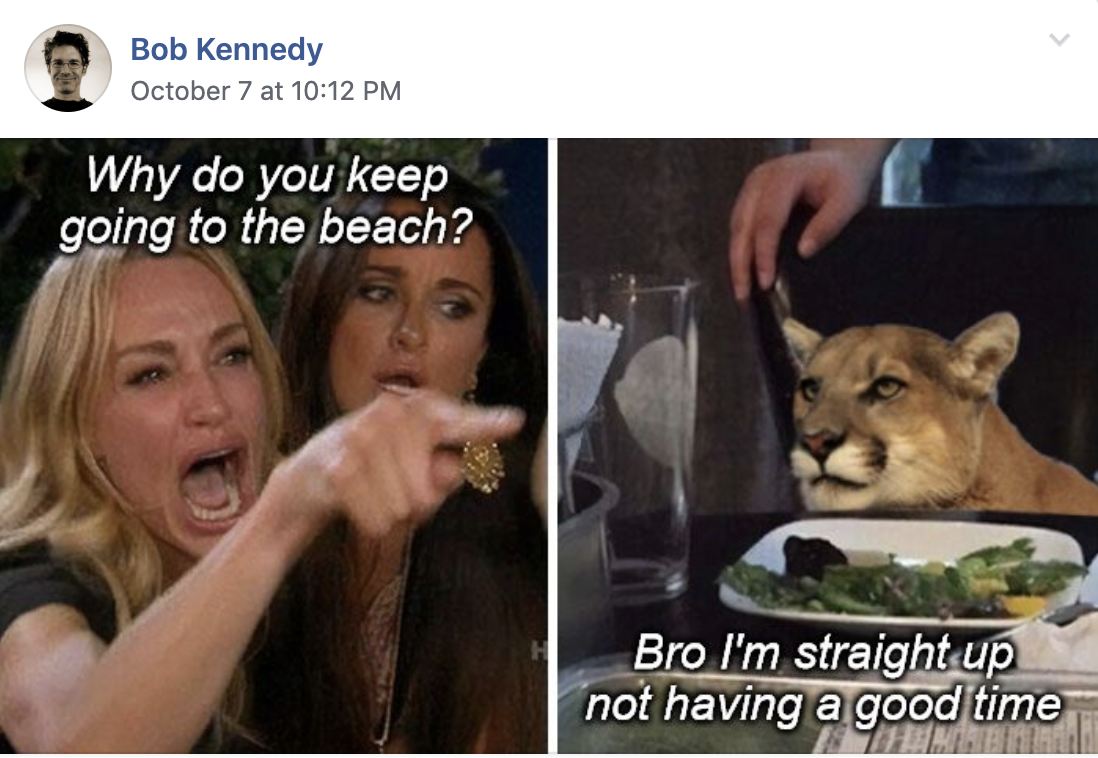 What most students don’t know, however, is that this post didn’t belong to a student at all — it belonged to a professor, seasoned with over a decade’s worth of experience in the art of memeing with enough practice to likely earn himself a degree in it.

The professor, Bob Kennedy — a linguistics lecturer at UCSB — first dipped his toes in the university’s meme scene years ago, when he began posting on a now-defunct Facebook group.

“I think your cohort is not aware of the fact that there was a different UCSB meme page around 2011, 2012 or so. It’s still up, but it’s fallen into disuse and nobody posts on it,” Kennedy said.

“I stopped checking because there was no activity on it. But then I think it was during Thomas Fire, one of my students mentioned to me, ‘Hey, Professor Kennedy, you’ve got to check out the [new] meme page because the memes people are making about the fire are hysterical,’” he added.

When it comes to jokes of his own, Kennedy blends in well with the student-generated memes around him, posting pictures of slumped-over trees and punny captions to appease viewers.

“Those [linguistics] jokes are lost on just about everybody,” he said.

But Kennedy said the jokes that don’t work serve to teach him about the ones that do. After teaching at UCSB for over 15 years, Kennedy has had ample time to hone his craft. He’ll opt to inject “a little bit of playful humor” while teaching a class, which oftentimes helps him make a point or lighten the mood.

“If I have humor in class, it’s either self-deprecating or it makes fun of people in power.”

But memes, on the other hand, serve a different purpose. Kennedy finds that the nature of memes — “a quick joke” — enables people to laugh at “content that everyone can get right away.”

“If it doesn’t need to be explained, then people are gonna respond well,” he added.

That’s not to forget about the downsides of meme culture, such as the potential for a “destructive” or “nasty” message — which Kennedy said is generally the result of cracking a joke intended to be funny but ends up offensive in its delivery.

“Another thing that comes up, especially in the teaching context, is where we confront humor that’s hurtful. And so in some of my classes, I do this: I’ll say, ‘Look, here’s the point of view that someone had tried to make with a joke and it’s offensive and their defense is going to be, ‘Well, come on, I’m just trying to be funny,’” Kennedy said.

“That’s never an appropriate response to defend a joke that’s been hurtful to someone else,” he added.

To avoid this, however, Kennedy suggests that anyone looking to crack a joke should bear in mind their own identity as to not “punch down” with their humor, or make a joke that pushes the boundaries on one’s identity.

Kennedy defines himself as a “straight, white middle-aged person,” which means “the only people I can tell jokes about are people who think they’re smarter than they are, people who are wealthy or people who are older than myself,” he said.

He made note of comedy’s magnitude in the academic world, some of which has spilled into classrooms at UCSB with Linguistics 135, a course dedicated to memes.

“I have a colleague in my department who teaches a class on memes and it’s a deep dive into theories of what it is that people are tapping into when they make [memes],” Kennedy said.

“There’s scholars who study the structure of humor and joke templates and everything else like that. And the nature of how humor plays a role in conversational interactions,” he added.

Although a linguist by trade, Kennedy said he uses comedy to not only make students laugh, but to also use memes’ shared “overlapping” sense of humor to better understand social practices used among college students.

“[The student perspective] is valuable to me,” which opens doors to a culture that “people my age ought to be more aware of than pretend like we’re annoyed by it or anything else like that.”

So next time a funny meme floats across your screen — look twice — it may be your professor.

A version of this article appeared on page 1 of the Oct. 10, 2019 print edition of the Daily Nexus.