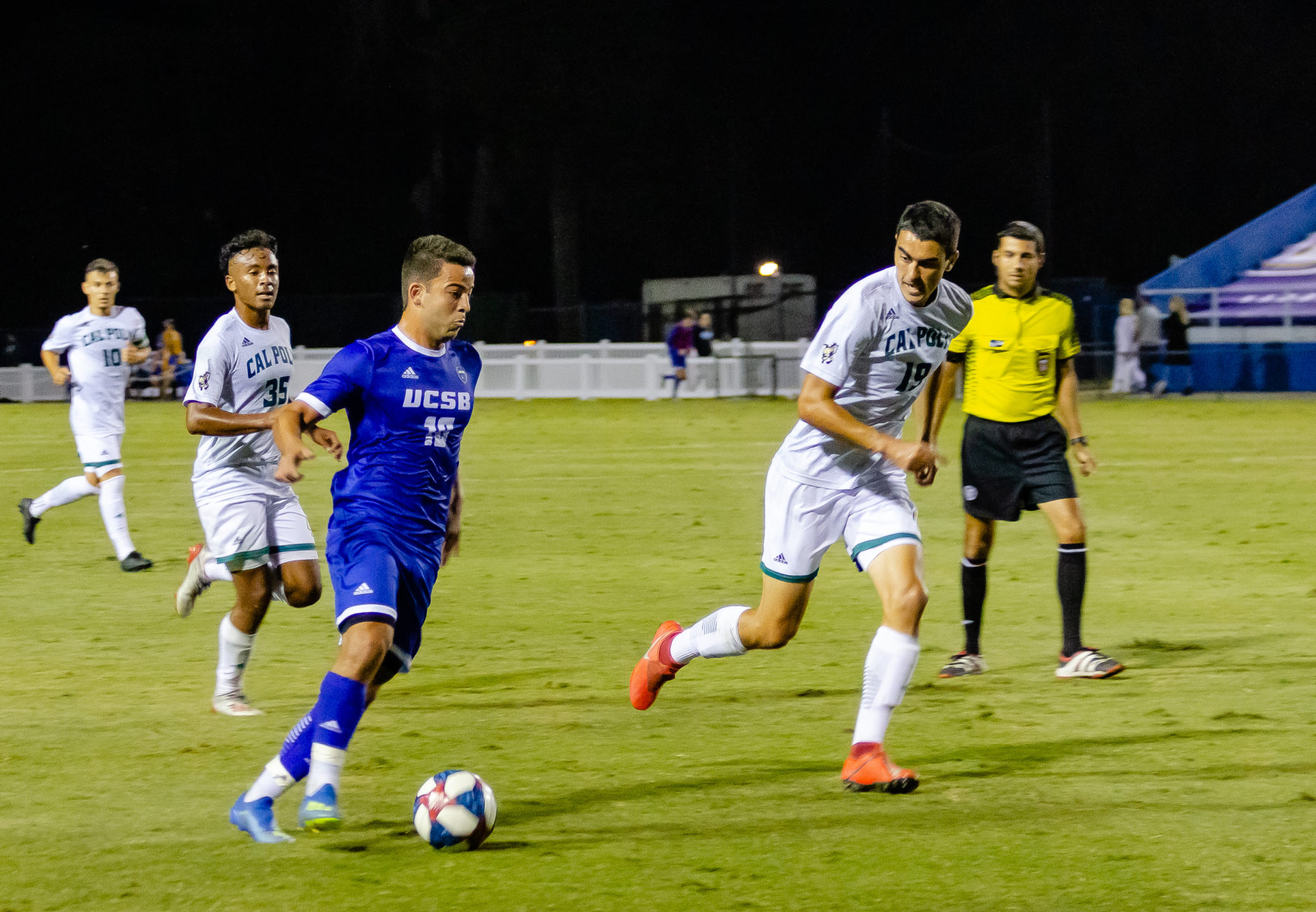 With the win, the Gauchos moved up to a 7-2-2 overall record, while the Mustangs dropped to 4-4-1 just as conference season is set to get underway.

UCSB controlled the ball from the opening kick and seemed to feed off the packed crowd of 9,748 fans who filled Harder Stadium last night.

Just like the team’s previous home game against Stanford, the Gauchos came into this matchup ready to attack. They took eight shots in the first 30 minutes of the match, forcing Cal Poly to retreat further and further back to their own side of the pitch.

A large part of this aggressive mindset has to be attributed to the return of defenders Hunter Ashworth and Noah Billingsley from their international duties. The two Kiwis had a sharp turnaround this week, qualifying for the Tokyo Olympics with the U-23 New Zealand national team on Friday before flying back to Santa Barbara on Saturday to play in the Blue-Green rivalry game.

Ashworth in particular made his presence known early on, making defensive stops and putting a couple of quick shots up in the opening minutes.

The Gauchos continued to press the Mustang defense as the half wore on.

In the 31st minute, junior transfer Ameyawu Muntari shot a rocket toward the Cal Poly goal that ricocheted out to junior Rodney Michael on the right wing. Michael gathered the ball on his right foot and sent a perfect cross into the box towards an unmarked Carter Clemmensen who took the ball home to give UCSB a 1-0 lead.

After a slow start to the season, Michael is hitting his stride at just the right time.

The star forward knocked in a goal in the Gauchos’ last two matches, but he has also transformed into more of a playmaker as well. He opened up the second half with a shot on goal and in the 52nd minute, he took the ball down the right wing yet again and drove a low cross into the box towards Clemmensen.

Clemmensen put a foot on the ball and it ricocheted off Mustang defender Josh Graham for an own goal, doubling the Gaucho lead to 2-0.

Cal Poly wasn’t ready to give up yet however, and the Mustangs revved up the physicality of the match in the second half. There were five yellow cards given out for both teams combined in the last 40 minutes of the game, including a second yellow and red card for Mustang midfielder Colin Hyatt.

This increase in fouls shook the Gauchos off their game a little bit, and that small lapse was all that Cal Poly needed.

With just about ten minutes to go, redshirt freshman Zack DiDonato was on the receiving end of a Mustang corner kick which he passed to forward Angel De Leon, who poked the ball into the back of the net.

Just like that, the lead was down to one.

Any dream of a Cal Poly comeback was dashed just a few minutes later however, when freshman phenom Finn Ballard McBride dribbled the ball out to around 23 yards and sent in a strike past the Mustang goalkeeper, putting UCSB up 3-1 and effectively ending the game.

This was a much needed win for the Gauchos if they hope to work their way up the rankings and earn an at-large bid in the NCAA tournament. They will have to keep winning at home, especially as conference season kicks off this week when they take on Sacramento State on Wednesday.

For now though, UCSB can celebrate knowing that we have the upper hand (and bragging rights) over our biggest rival.