The Daily Nexus
Nexustentialism
It's satire, stupid.
UCSB Mountain Lion: Where Is He Now?
October 3, 2019 at 4:40 pm by Christina Muoio 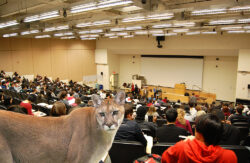 The notorious UCSB mountain lion has reportedly had a successful first week at school. After moving into his dorm in FT, his RA, B. Trayal, expressed gratitude for how smooth Mountain Lion made the move-in process.

“It was so stress free,” Trayal said. “I’ve never seen anything like it before. So many freshmen come in with a U-Haul’s worth of stuff, but Lion only brought a stick with him and didn’t even have to bug me for a cart.”

Lion’s first day of school went well too. According to his Soc 1 professor, Lion had done all of the reading for the entire quarter before the first class, and as such, his participation in the class was extremely valuable and surpassed that of other freshmen.

“I have never seen such a motivated student in my whole academic career,” Lion’s professor stated. “I wish all students at UCSB were like him.”

Lion also had a successful rush week and he even received a bid from the fraternity he was rushing, Sigma Tau Omicron Pi.

“He’s the coolest dude I’ve ever known,” Lion’s big, Chad, said. “He was so cool, we didn’t even haze him. Hell, we might even elect him president of the frat next year, he’s that awesome.”

Currently, Sigma Tau Omicron Pi is discussing whether or not to rename the fraternity after Lion, in addition to the possibility of Lion assuming the presidency of the frat next year.

Lion also went to his first party on DP this week. He successfully managed to find the street without getting lost, and Lion didn’t even black out. What an accomplishment! He was reportedly respectful at the party and even cleaned the house the party was held in. Such a good guy!

Lion also attracted the attention of Chancellor Yang, who was not at all shocked or surprised to see a mountain lion on campus.

“Lion continuously serves as a valuable member of the UCSB community, and we hope that all students follow his example. Lion is truly the pillar of our community, which is why I’m announcing that UCSB will now officially change its mascot to the mountain lion. Thank you, Lion, for all that you do to make this university great,” Yang said in an email statement sent out to the student body.

Overall, we at Nexustentialism are proud of Mountain Lion and wish him a successful four years at this university.

Christina Muoio wishes her first year was as fun as Lion’s.