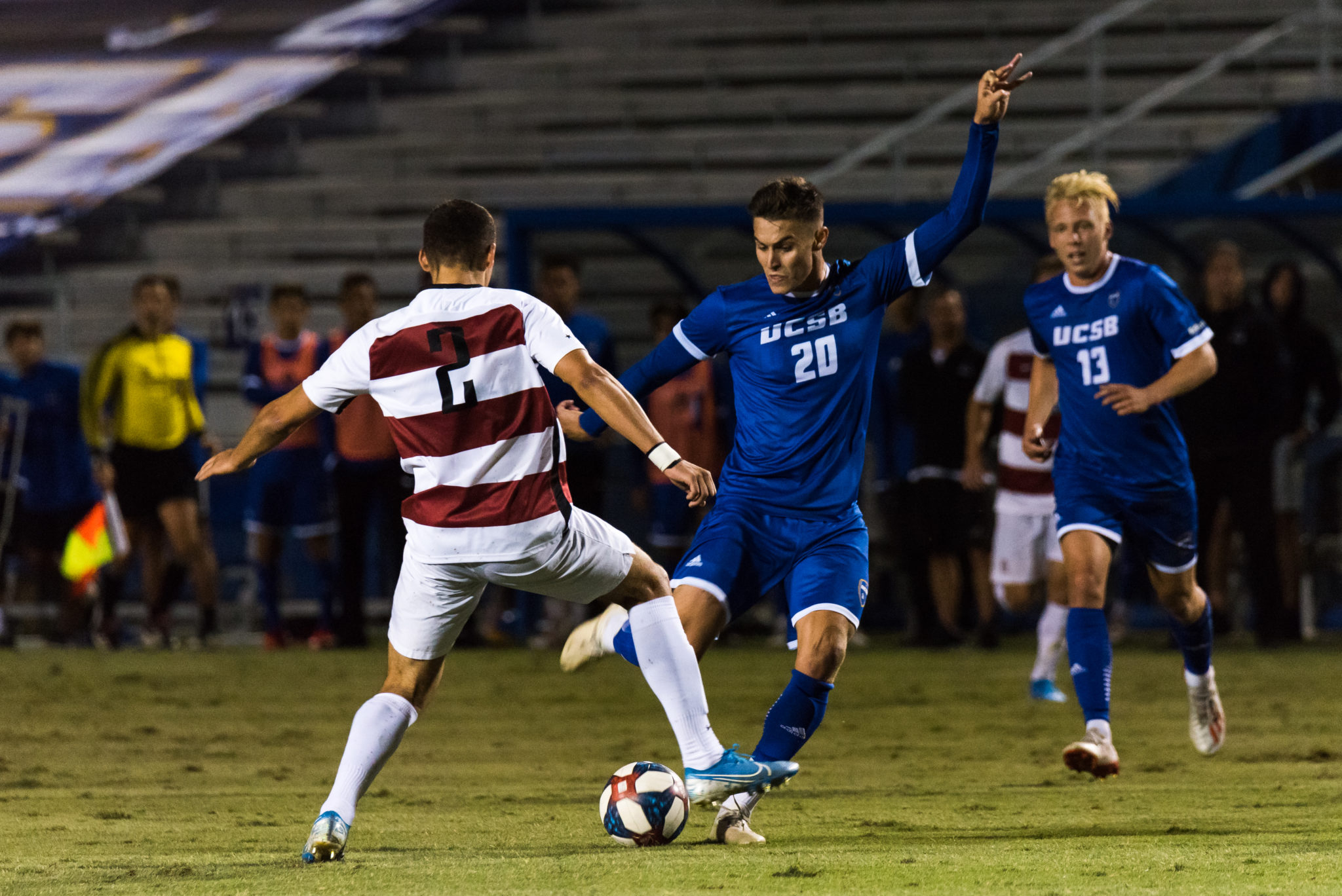 The UCSB men’s soccer team was six minutes away from taking down the top team in the country, but a late defensive mishap eventually led to a 3-3 tie against the No.1 Stanford Cardinal.

The Gauchos pushed their no-loss streak to six, and now stand at a 6-2-1 overall record. The Cardinal still have yet to lose on the season and are now at 7-0-1 after the draw.

Although Stanford came into this match as the undisputed best team in the nation, it was actually UCSB who dominated from the opening kick. The Gauchos were on the attack early, testing the Cardinal backline with two good looks in the first 13 minutes.

Just 14 minutes in, UCSB was awarded two consecutive corner kicks following a Will Baynham shot on goal. Senior midfielder Thibault Candia curled the ball into the box for the second corner, and as players from both teams descended on the ball it was freshman Finn Ballard McBride who got to it first for the Gauchos, backheeling it past the Stanford goalkeeper to put UCSB up 1-0.

To say that this early goal was surprising would be an understatement. The Cardinal had only trailed for 30 minutes out of the previous 630 that they had played, and they had given up a total of two goals prior to this matchup.

The Gauchos would double that total just five minutes later, when forward Baynham headed home an Ignacio Tellechea free kick in the 19th minute to put UCSB up 2-0.

As the half wore on, both teams began to get into their offensive rhythms. Stanford in particular started to pass the ball around and open up the Gaucho defense, but if the backline just continued to hold their own and limit any mistakes UCSB had a great chance to take its lead into the halftime break.

Unfortunately the Gauchos made a crucial mental mistake with just three minutes to go into the half, sending up numbers trying to score a third goal which left them vulnerable to a counter-attack. Stanford forward Ousseni Bouda took the ball down the length of the pitch and sent in a cross from the right wing which dropped right around the penalty spot. Because UCSB had sent so many players up the field, there were no defenders around to clear the ball, and junior forward Arda Bulut had a wide open shot on goal which he put in the back of the net.

Although UCSB was essentially playing with house money at this point, it still was disappointing for the team to give up a goal when they just had to hold strong for a few more minutes.

“If we had gone into the half up 2-0 it would have obviously been better in terms of trying to win the game,” Coach Vom Steeg pointed out postgame.

Stanford came out strong to start off the second half, searching for an equalizer. The Cardinal would get it just two and a half minutes into the period, when defender Keegan Hughes charged through the Gaucho defense unmarked to head home a Logan Panchot corner kick.

There’s a reason that a 2-0 lead is known as the worst lead to have in a soccer game, because as the Gauchos learned the hard way, once the opposing team scores one goal, another one usually follows closely behind.

This shift in momentum could have proved fatal for UCSB if it was a lesser team, but the squad’s star power is what kept them in the game. And in the 62nd minute it was the star junior Rodney Michael who came through for the Gauchos as he has so many times before. After a Baynham shot that was blocked by the Stanford goalie, Michael received the ball at the top of the box, did a quick dribble move to get the ball to his right foot and rocketed the ball into the back of the net giving UCSB the 3-2 lead.

It was at this point that the energy of the packed crowd at Harder Stadium reached its peak, and there seemed to be a great chance for the Gauchos to finish the job and give Stanford its first loss of the season.

UCSB was able to hold strong all the way until the 85th minute, when redshirt sophomore Zach Ryan received a cross in the box and passed it over to fellow Cardinal Charlie Wehan who knocked the ball in for his second goal of the year.

It was a tough end to regulation for the Gauchos who had fought so hard to maintain their lead.

“It was really frustrating because obviously the whole team had battled so hard to get to that point where we were in the lead,” Michael said after the game. “It was just those last five minutes that we weren’t able to pull through.”

The game then went into overtime, where both teams had chances to score that they couldn’t put away. The most impactful event of the whole game actually came at the end of the first overtime, however, when UCSB senior defender Faouzi Taieb broke his leg after a collision in the box. Taieb was the team’s rock on defense, and losing him with an already depleted defensive backline will be tough for the Gauchos to recover from moving forward.

“All in all it was a great effort from our guys. It is a positive result in terms of where we were,” Coach Vom Steeg said after the game. “But [the team is] really disappointed about what happened to our star defender.”