A few nights ago, I was mindlessly scrolling through Netflix when a film called “Tall Girl” caught my eye. Its title was so plain and literal that I took it as reverse psychology. There was no way two words could make up the entire premise of a two-hour movie. Unless…

“Tall Girl,” which debuted on Sept. 13, is the latest addition to the teen rom-coms for which Netflix has become known. It faithfully adheres to the formula set forth by predecessors like “Sierra Burgess Is a Loser” and “To All the Boys I’ve Loved Before.”

Here’s how it goes. A middle-class female protagonist struggles to navigate her way through high school. Though she is perfectly likable, things are not going well for her. Somehow, she only has two friends: her personal cheerleader/sidekick (usually the cast’s only person of color) and the nice guy who has an unrequited crush on her. Her life is made hellish by a posse of mean girls, led by a Regina-George type who drops sassy one-liners while sashaying through the halls. Worse still, the heroine is head over heels in love with the school’s hottest guy, who is obviously entangled with the most popular girl in school. Because she is a “nerd” (read: has a cool talent, reads books, is not a bitch), our heroine’s chances of accompanying him to prom/homecoming/spring fling/etcetera are ostensibly nil. 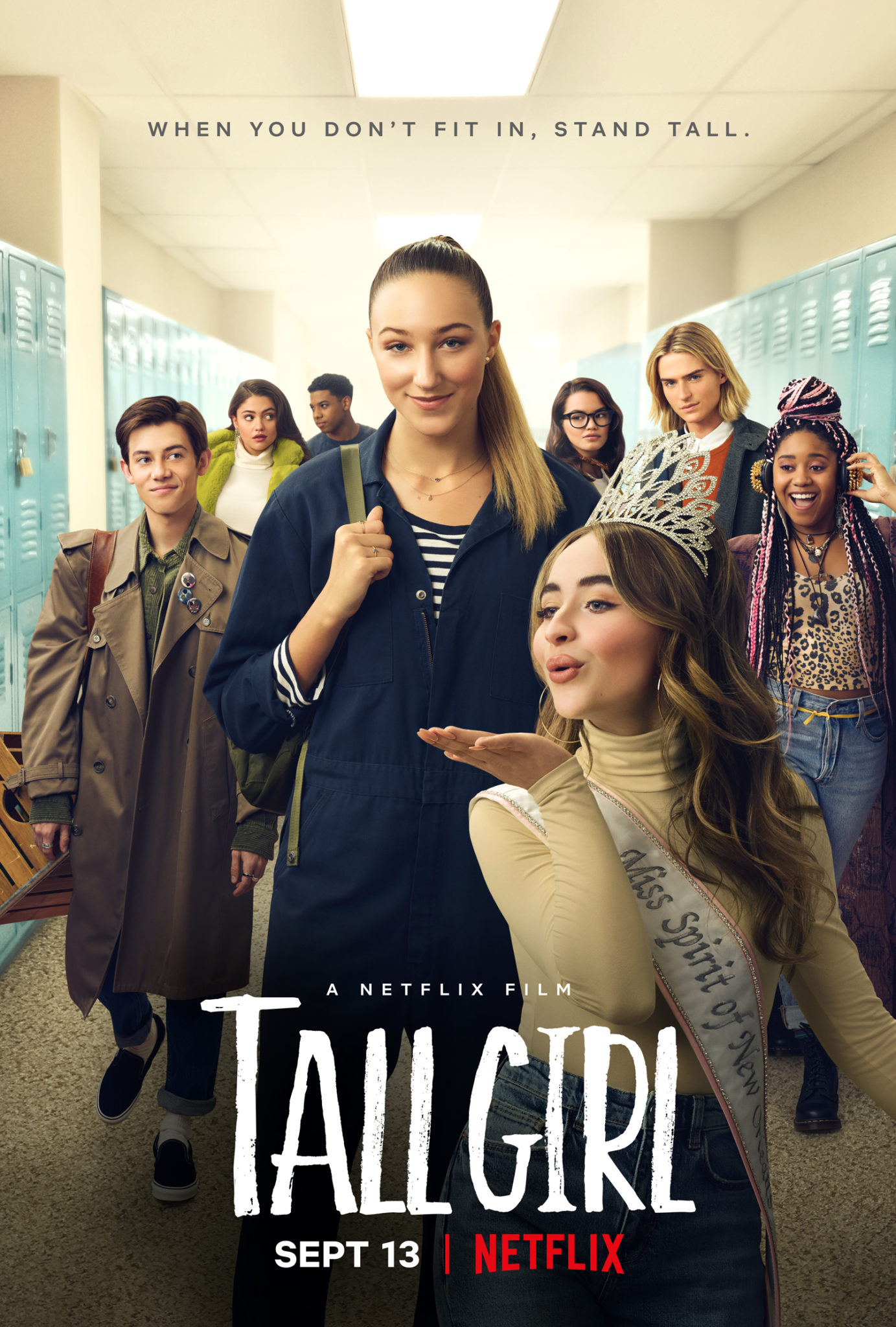 All snarkiness aside, a Netflix protagonist’s most essential quality is that she is an outsider. Whether she is overweight, unattractive or fails to meet societal standards in some other way, this aspect of her identity makes her relatable and worth rooting for.

Jodi Kreyman, the main character of “Tall Girl,” is no exception. She’s a “freak,” a “Sasquatch” and … a tall, white, conventionally good-looking blond girl.

Granted, she isn’t just tall. At six-foot-one and a half inches, she is the tallest girl – in fact, she is the tallest person at Ruby Bridges High School. Having apparently never encountered anyone over 5’5” before, her classmates can’t help but gawk at her stature.

“How’s the weather up there?” someone quips every few seconds. Her given nickname is “LeBron.” And when she stands up straight, boys literally go running in the other direction.

But at the end of the day, Jodi is still a normatively good-looking, privileged young woman.

Do beauty and privilege guarantee protection from bullying? Of course not. Are people bullied on account of their height? All the time.

However, predicating a movie about bullying on a trait that is considered not just normal, but favorable by mainstream society doesn’t sit right. According to the strange logic of “Tall Girl,” Jodi is the ultimate outcast. But with her blue eyes, blond locks and fair complexion, she looks more like the models featured in “Teen Vogue” than the actual teens who comprise its readership – who also happen to be the movie’s target audience.

“You think your life is hard?” Jodi asks in one of the first lines of the film. “I’m a high school junior wearing size 13 Nikes. Beat that.”

I’d venture to guess that a lot of people can. If the tall in “Tall Girl” was replaced with “fat,” “gay,” “disabled,” “socially awkward” or any other trait that falls outside accepted social norms, Jodi would be a far more relatable character – and “Tall Girl” would be a much, much better film.

She’s a “freak,” a “Sasquatch” and … a tall, white, conventionally good-looking blond girl.

The hysterical, nonstop attention that everyone pays to her fairly average stature is almost “Twilight Zone”-esque in the way it warps social realities. “You’re the tall girl. You’ll never be the pretty girl,” declares the resident mean girl, as if the two are mutually exclusive.

More evidence that the movie is set in an alternate universe: her sister, who looks about five feet tall (and, in a cruel twist of fate, shares my name), is a teen pageant queen, while Jodi, the more natural model of the two, watches from the audience.

Jodi’s parents shower her with pep talks about self-love and “facing adversity.” For a brief, horrifying moment they even consider putting her on anti-growth steroids. They host a meeting of the “High Hats,” a society for similarly tall people to convene and talk about – what else? – being tall. (Are tall people going extinct? Am I missing something here?)

The idea that being six feet tall defines Jodi – and that everyone else shares this conviction – is absolutely wack. But the contrast between what the film seems to want to say and the message that it actually conveys is nothing short (heh) of alarming.

“Tall Girl” aims to be a feel-good, lighthearted movie and hopes the audience will identify with its underdog protagonist. But by the end, it feels like we are meant to believe that being six feet tall – or diverging from what is considered “normal” in any way – really does make you a freak.

I don’t know if the bizarre, two-hour fever dream I just experienced will be remembered as a strange footnote in the history of Netflix originals or a blip in the platform’s concentrated effort to diversify a tired genre. All I know is that “Tall Girl” is a size 13 step in the wrong direction.

You seriously can’t see how a girl might be abused by other teens for being nine inches taller than average? How that might become her whole identity? You seriously think that a study showing that tall people are more successful applies to a woman that causes jaws to drop in shock when she enters a room? You have a lot less empathy than you think you do. I’m sure this will come as an out-right shock to you but sometimes people have struggles outside of your approved “acceptable reasons to struggle” list. Also sometimes movies are made about people who… Read more »

Disagree
Reply to  Embarrassed for you

Look at the movie! This “tall girl” is hot and a total model. That Netflix is trying to convince me (a fat dude with thinning hair) that this girl is going to have a hard time in life is laughable. Most of the tall hot girls I know are doing just fine! They rise to the top of their professions because height is seen as a good leadership quality and there are no shortage of tall, successful and attractive men who are ready to marry them because they see what an advantage a partner like that would be.

Anonymous
Reply to  Embarrassed for you

The rowing team would BEG her to join. She has a significantly higher shot at being a model. It’s important to look at the intersections which define her. A blonde tall white woman might be made fun of. Is she really the one having it hardest though? Like, every struggle deserves some representation, but it’s useful to criticize the lens in which we view a social issue and why that lens is the default. She’s not just “a tall girl”. She has other identities. Tall girls have certain downfalls but also potential opportunities. Those opportunities vary depending on their other… Read more »

Anonymous
Reply to  Embarrassed for you

Damn ma is it that serious

Why does every piece of media have to be some woke exploration of marginalized minorities? If you go to a feel good teen-targeted comedy looking for sociopolitical commentary you’re doing it wrong.