The Daily Nexus
News
Formerly Incarcerated Student Wants To Make A “Blueprint” For Others To Pursue Higher Education
September 20, 2019 at 8:37 am by Max Abrams

Three months before he was set to be a free man, the idea of life on the outside had Ryan Flaco Rising up to his neck in stress. After losing nearly half his life to the prison system, his outlook felt bleak — except for his hopes of going to college. He already had nearly a year’s worth of credits thanks to a newfound passion for learning he discovered while in prison.

Rising — now two months into his time at UC Santa Barbara as a third-year comparative literature and interdisciplinary major — heard about a program called Berkeley Underground Scholars (BUS) shortly before his release, which helps formerly incarcerated individuals attain college degrees. Eager to learn more, he called Danny Murillo, co-founder of BUS, off of a contraband cell phone, who assured him there was hope after prison through education. 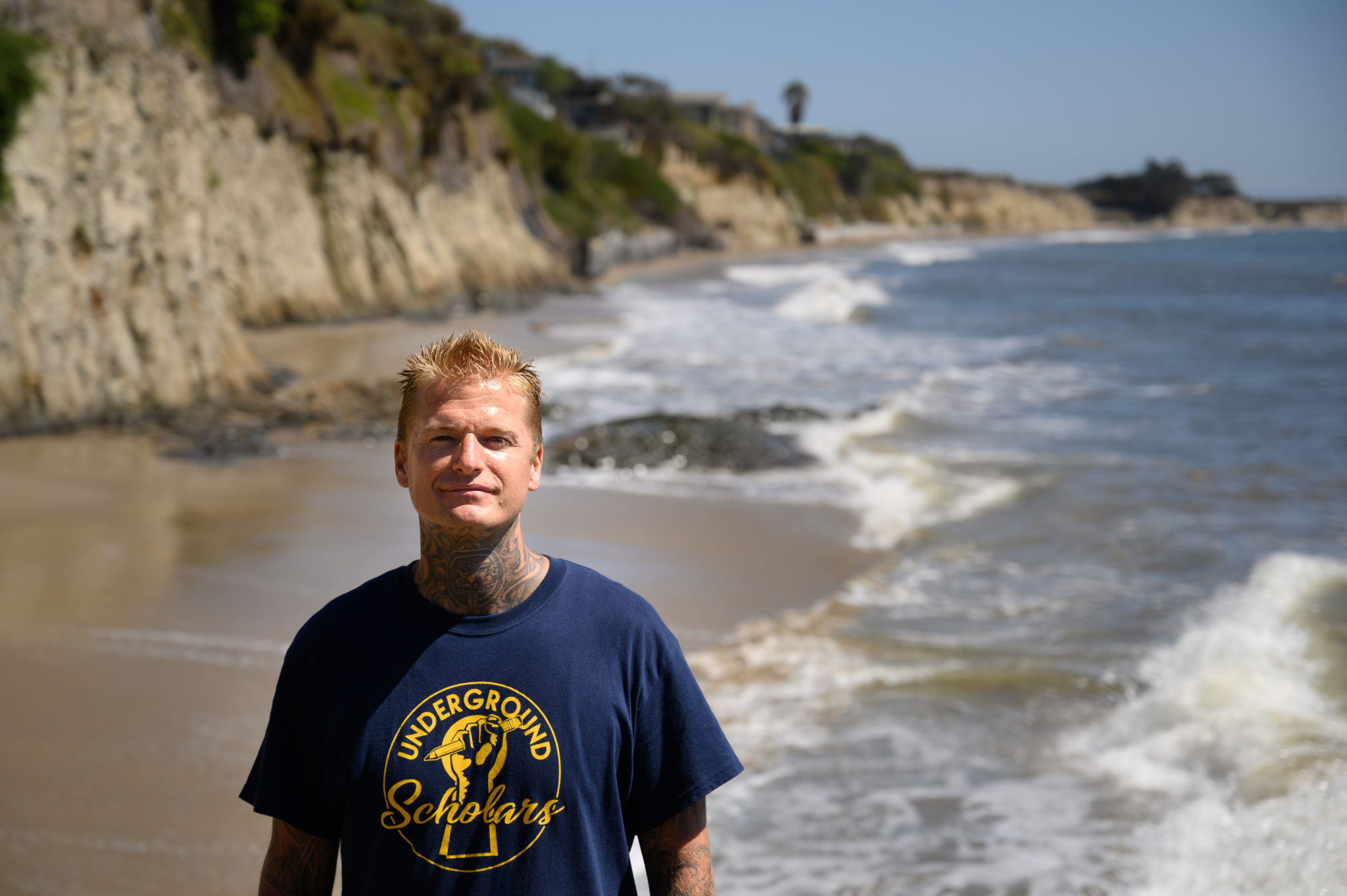 For Rising, it’s the prospect of leaving a legacy for his children that motivates him to continue helping formerly incarcerated students. Max Abrams / Daily Nexus

Upon release from prison, Rising became houseless, but BUS had not forgotten about him. Members of BUS flew to meet Rising in San Diego, where he was living after prison, to convince him to enroll in San Diego Community College and start his own chapter of Underground Scholars there, but multiple hurdles sent Rising on a detour.

Rising curbed his drug use after taking a class in prison on the pharmacology of drug abuse, but he was still admitted to rehab after leaving prison. He soon left, walking away from an offer to work at the facility so that he could go to school.

But upon arrival, Rising instantly felt out of place. While in class, the insecurities of his “tatted up” appearance and his age — a decade older than most — spiraled him into dejection.

“I wanted to quit. I didn’t feel like I belonged. So I called Martin [Vela-Sanchez] up at Berkeley Underground Scholars and he goes ‘Flaco, just do 90 days [at the college]. Do 90 days and shake as many hands as you can and you’re going to see that people were there that went through the same exact thing you did,’” Rising said.

While in community college, Rising learned to embrace his differences and founded the Urban Scholars Union, a support group for formerly incarcerated students. But two years wasn’t much time, Rising said, and following graduation, he was looking to establish something bigger: “I beat prison and I used school as a platform to end the cycle of recidivism, I found a way out.”

With an associate’s degree under his belt, Rising began scouting universities to continue his education. He had applied to four UC schools — UC Irvine, UC Los Angeles, UC Santa Barbara and UC Berkeley — along with the University of San Diego and was accepted to all of them.

After visiting UCSB, Rising was sold — in part, he said, because there was no Underground Scholars program here. He felt a calling to carve out a program from scratch, despite everyone at UC Berkeley that was “waiting for [him].”

He hopes to make his own mark on the campus with the creation of such a program, one that would be the first of its kind at UCSB. Operating like most others within the UC system, UCSB Underground Scholars will support students released from prison in an effort to guide them through their educational experience and walk away with a degree.

“I have been trained by my mentors — the other students who have come before me — who paved the way so there’s a blueprint that can be implemented to actually help other formerly incarcerated individuals,” Rising said.

Rising said he is currently working with the Office of Admissions, the Educational Opportunity Program, the Transfer Student Initiative, Assistant Vice Chancellor Katya Armistead and other Underground Scholar programs, in addition to seeking out a space on campus to house the initiative.

Although still in its early stages, Rising already sees the potential of having a space for formerly incarcerated students on campus. By extending a hand to someone who could use help in school, like Rising himself, he said the initiative is a way to break the tumultuous cycle of the prison system, where many individuals often end up back behind bars because they never had the opportunity to pursue higher education.

“From correctional facilities to college, we’re focused on helping people come back out and re-enter through the college system because we’re set up from the gate, we’re set up to fail by probation and parole,” Rising said.

Rising embraces his past, not only to use it as fuel for his ambitions, but also to show people like him that a life outside of prison is completely possible.

“I’m promoting college and I dub it as being a ‘gangsta nerd.’ I’m still that gang member. I still represent East LA, but I represent it in a new way,” he said.

To Rising, two million incarcerated individuals in America is too high of a number for the country “that celebrates freedom the most.” His solution extends beyond UCSB, where he hopes to see more unity in communities that are hurt the most by crime and incarceration. Oftentimes, he said, it’s the absence of a legacy to aspire to that sends people to prison.

For Rising, it’s the prospect of leaving a legacy for his children that motivates him to continue helping formerly incarcerated students as an advocate for education.

“My children have been through a lot, their dad hasn’t always been there, I’ve been incarcerated,” Rising said.

“But now, my daughter wants to go to college,” Rising said. “My son, he wants to be an author.”

This is fantastic! I am really excited for Rising, proud of him, and grateful that he’s giving so much of himself to help others.

Congratulations Flaco, your story inspires me because it’s my story. I too am formally incarcerated and about to get my AS degree from Allan Hancock College in May of 2020. The UC scene is now very attractive and hope we can form some kind of bridge to help other individuals just like us!
Much Respect,
Cheech- President of AHC B.I.G.E.(Beyond Incarceration Greater Education) Club.