The Daily Nexus
Opinion
Hey Amazon, Bring Back our Bookstores
September 14, 2019 at 8:00 am by Komal Surani 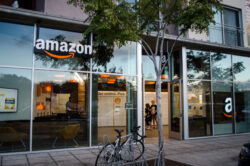 When I was a kid, my dad would ask me, “Do you want to go to the bookstore or to the toy store?” I would always reply, “Bookstore!”

I loved everything about our weekly trips to the bookstore: discovering new writers, flipping through the middles of random books and being surrounded by so many different stories. Now, 16 years later, I buy almost all my books from the Amazon website and most of the people I know do the same thing. Amazon is cheaper and more convenient, which pushes people to buy from it, rather than from bookstores.

Amazon.com Inc. started as an online bookstore but soon expanded into selling toys, DVDs and videos, kitchen tools and almost anything found in a store. The company has footholds in virtually every major industry, including publishing, video and music streaming, web services, consumer electronics and food delivery. Today, Amazon.com is a multibillion dollar corporation that has absorbed large companies like IMDb, Whole Foods and Twitch.tv. Last year, it reported a record profit of $10.1 billion.

Amazon.com’s popularity is driven by the same two factors that have also turned people off from buying from traditional bookstores: pricing and convenience.

Prices for most products are categorically lower online than they are in stores. When it comes to books, prices are determined by publishers, whose revenue primarily comes from physical book sales. Publishers typically charge retailers like Amazon and Barnes & Noble about half of the price retailers charge customers.

Yet unlike physical bookstores, Amazon can sell books at lower prices without suffering long-term financial consequences. As a massive corporation with numerous sources of revenue, Amazon can afford to charge less because it can easily make up the difference with other product sales.

Independent bookstores and chains cannot afford to lower their prices because their only source of revenue is from the books they sell. Furthermore, physical bookstores incur additional costs that online retailers do not have to contend with, such as rent, maintenance fees and staff salaries. By consistently offering lower prices, Amazon makes bookstores appear needlessly expensive. Since publishers and writers still receive their cut either way, it’s not in their interest to lower book prices for the sake of preserving physical stores.

But price isn’t the only factor allowing online bookstores to drive physical stores out of business; convenience also plays a key role. As most of us know, there are no actual bookstores in Isla Vista. It does, however, have an Amazon locker, the convenience of which cannot be overstated. An Amazon locker is basically a post office for purchases made on Amazon. The site even offers a one-day delivery service to these lockers, which is especially useful when it comes to textbooks, because students often need books at a moment’s notice.

Though online marketplaces are not going away anytime soon, there’s no reason why they can’t coexist with the bookstores we know and love.

The I.V. Amazon locker is also located in a prime location. For me, it’s right between campus and my apartment, so I can easily stop by and grab my packages on my way to or from school. There’s little to no possibility of me driving all the way to downtown Santa Barbara to visit a bookstore, wasting not only gas and time but also the $10 I’ll have to splurge to buy my books there. Furthermore, Amazon sells textbooks for a lot cheaper than the average bookseller, allowing students to save money.

As a result, Amazon is contributing to a national decline in the bookstore business. Borders Group Inc. closed in 2010, followed in 2017 by Book World, the fourth largest bookstore chain in America. The three largest chains, Barnes & Noble, Books-A-Million and Half Price Books, have been struggling since. In fact, in 2011, Barnes & Noble began closing store locations, resulting in a drop from 13,136 book-selling establishments in 1992 to a record low of 6,448 in 2016.

Despite the advantages of shopping for books online, bookstores are a formative part of our culture. On a personal note, I have struggled to figure out what kinds of books I am into because there aren’t any good libraries or bookstores near me. I am stuck buying books on Amazon based on my middle school interests and reviews left by untrustworthy online shoppers. Some of the best writers I’ve gotten into have come from books I stumbled upon at bookstores, which I never would have found had I just bought from Amazon.

As a writer, I have to believe that the reason I fell in love with stories was because I spent half my childhood in bookstores and libraries. Reading gives you experiences that you sometimes can’t get from real life. Each book teaches you something new. For example, “Flirting for Dummies” has taught me that I’m really bad at flirting.

Browsing online means that there’s no one to chat with about books. If I buy on Amazon, I stick with writers I already know, rather than expanding my horizons. There is virtually no exploration that can parallel the experience of wandering through a Barnes & Noble.

The best part of any book is the unexpected. It’s the part that hurts you, that makes you laugh and it’s what makes reading it worthwhile. To me, that unexpectedness is the reason we need to keep bookstores alive and why we cannot allow online retailers to take this experience away from us. Though online marketplaces are not going away anytime soon, there’s no reason why they can’t coexist with the bookstores we know and love.

You can find Komal Surani lost in stories at her local Barnes & Noble.

There aren’t any good libraries near you? What about the giant one in the middle of campus? You know- the one that recently received a taxpayer-funded $80 million expansion? The same one with over 3 million printed books alone? The one that’s probably less than a half hour walk from wherever the author lives, assuming she lives as far from campus as she can while still living in IV? You know, the one she gets to use for free as a student but unaffiliated people pay $100 to use?

What more is she asking for in a library?

Ha ha ha ha ha! I love it. Thank you for posting this.

Author: I want bookstores to come back. Also author: hell no, I’m not gonna go to a bookstore to buy books, are you crazy? They’re too expensive. This is like when people use self-checkout in grocery stores or order kiosks in fast food places and are shocked and appalled when those organizations lay off employees. If a business practice works and makes it more convenient to simplify things, than you, the customer with a particular moral compunction, must inconvenience yourself to affect the outcome you desire. Don’t virtue signal about how awful it is that bookstores are going out of… Read more »

To all you long-out-of-college Goleta locals who say to use the library: academic libraries do not focus on general-interest books, so unless your idea of leisure reading is a 1974 thesis on the composition of rocks in the Eastern Sierra Nevada, it’s not a replacement.

In fact, academic libraries are basically Starbucks these days: you taxpayers spent $80 million to convert it from a pile of books into a study room. Everything, including back content, has been digitized and most journals have gone online-only. There is little reason for an academic to step foot into a library these days.

So I Stumbled across a book the other day while browsing random sites. Perfect gift for family member. Clickrd on link to read more.Decided to go to Amazon and buy with ne click. Decided to hesitate & check funding. Did not save. Have not been able to find book since. Not in browsing history nor was Amazon chat able to come up with info even though it was in my cart briefly. All I remember about the book is that it was written by a female blogger who has raised 7 mostly adult children and is divorsed. Bool is said… Read more »

So Sorry for all the typos. First time use of this process. could not see all of text until sent.

I also prefer going into the bookstore. The experience of spending some nice and peaceful time with a good book is so therapeutic. I also enjoy meeting other for coffee and a snack. I am the person who hates to shop online. I love going to stores seeing and feeling the materials and just having the opportunity to consider things i see in front of me that i would not online.