The Daily Nexus
Science & Tech
Epigenetics, Corals and Climate Change
September 12, 2019 at 9:30 am by Hannah Hirou

Coral reefs are underwater ecosystems distinguished by reef-building coral. They are often thought of as the “rainforests of the sea,” famous for their beautiful colors and thousands of varieties of aquatic animals.

In recent years, the public has become aware of the threat that climate change has presented to these sensitive ecosystems. The poster child of this is the Great Barrier Reef, which has lost more than half its coral since 1985 as of 2012.

Studying how these reefs are responding to a changing ocean is a vital step in learning how these and other organisms may respond to climate change.

Unfortunately the negative impacts that climate change could have on coral reefs have not been fully realized.

“Despite how vibrant a healthy reef can appear, these ecosystems can be delicate when it comes to stress. And unfortunately the sources of stress are many for a reef: they can be poisoned by pollution, bleached by hotter temperatures, damaged by overfishing, and dissolved by a more acidic ocean. Even well-meaning visitors can damage the reef when they stand on or touch the corals,” Moeller said in an email.

Moeller and other marine scientists received a $3 million, five-year funding from the National Science Foundation (NSF) to set up long-term research on the coral reefs around Moorea in French Polynesia.

Epigenetics is the study of changes in organisms caused by modification of gene expression, rather than an alteration of the genetic code itself. It is a dynamic method that allows an organism to react phenotypically to its environment by essentially expressing certain genes in response to its environment. Genes can be silenced by another gene, for example, but it becomes a problem if the expressed allele is damaged or contains a variant that increases the organism’s vulnerability to microbes, toxic agents or other harmful substances.

These are the factors that could challenge a coral’s survival. Thus, studying the epigenetic response coral reefs have to their environment could tell an abundance about their biology in regard to climate change. 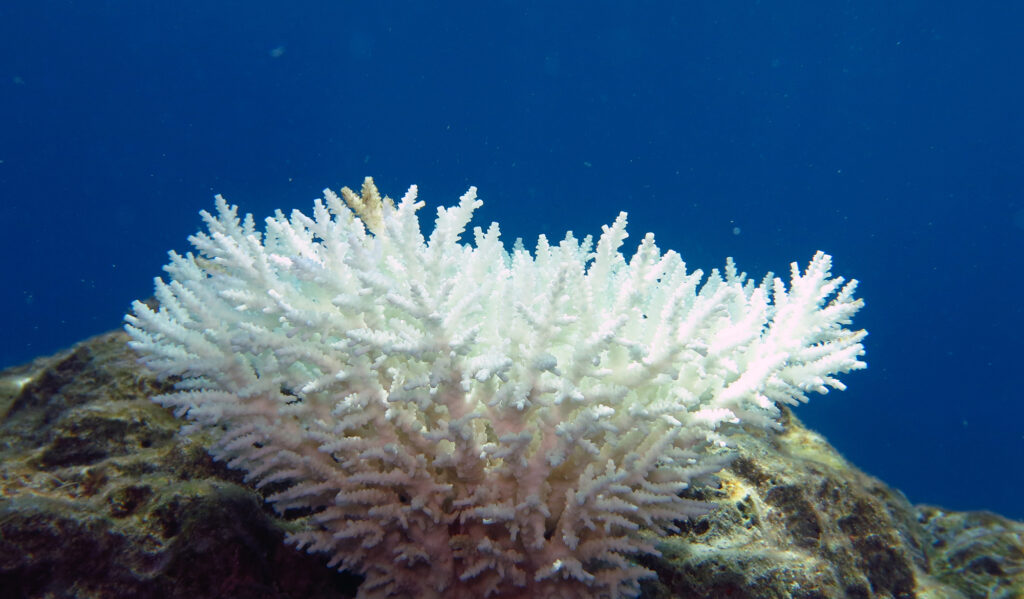 One potential source of stress for coral reefs is bleaching. / Courtesy of Wikimedia Commons

Coral reefs have blossomed against the odds in the past. It may seem counterintuitive but the warm waters of the tropics are often nutrient poor, lacking the nutrients of colder waters that are rich with phytoplankton and zooplankton that sustain a vast array of ocean life.

Coral circumnavigates this problem by forming a mutualistic relationship with zooxanthellae algae. The glucose the algae makes from photosynthesis feeds the coral animal in exchange for a home in a calcium carbonate castle.

“Together, this coral-algal partnership creates a physical structure where other organisms can gain a foothold, find a place to hide or go to forage for food. Even open ocean species, like pelagic fish and sharks, will stop by coral reefs!” Moeller explained.

As ocean acidity levels rise it puts stress on these algae that could cause them to die in a phenomenon known as coral bleaching.

With coral reefs being the anchoring point for the complexity of life in tropical waters it should come with great alarm that coral bleaching threatens their existence as ocean acidification increases. However, the research to come is not limited to just the effects of ocean acidification.

“Our work is trying to address basic scientific questions about how corals respond to changing environments, and how fast they can do it. So in that sense our goal is pretty broad, but we may indeed find some signs of how corals might be able to (or might not be able to) adapt to future ocean conditions,” Moeller said.