For environmental issues, there’s no exception. 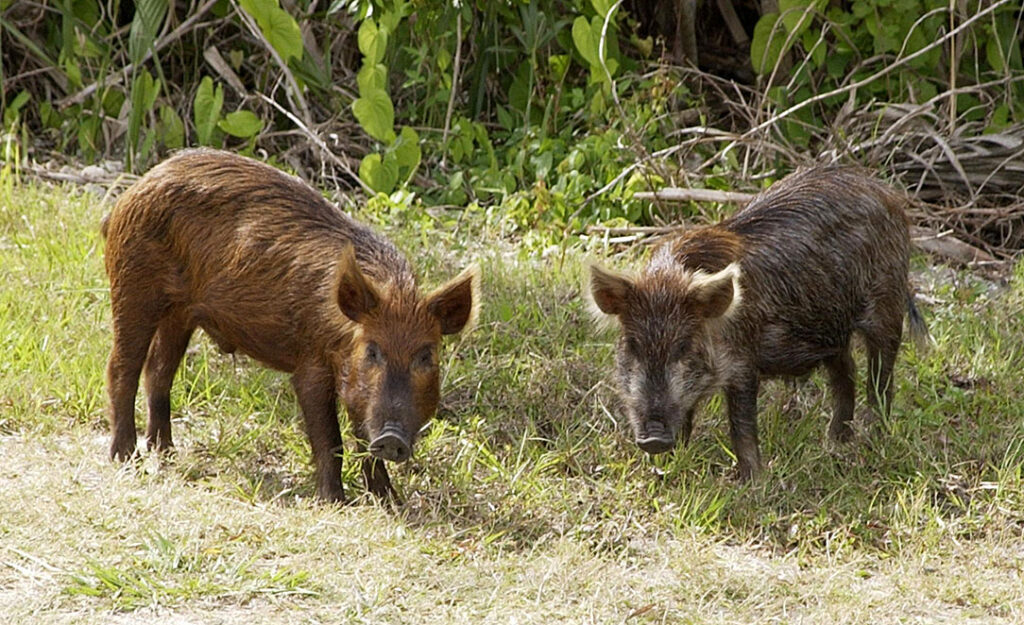 The researchers’ study on effectiveness of messaging frames for invasive species management used the example of wild pigs. / Courtesy of Wikimedia Commons

Published in PLOS ONE, a recent paper from Alex DeGolia, a 2017 UCSB Ph.D. graduate; Elizabeth Hiroyasu, a Ph.D. candidate at UCSB’s Bren School of Environmental Science & Management; and Sarah Anderson, an associate professor of environmental politics at the Bren School, investigates how environmental managers can frame messages about environmental issues to more effectively garner public support.

“We were interested in knowing if there were ways to talk about invasive species management policies or practices that were being put into place that would increase support for that management action,” Hiroyasu explained.

To test this, the researchers gave different messages about hypothetical management of invasive wild pigs to a survey of over 1,000 California residents. Set up to look like press releases from the California Department of Fish and Wildlife, the statements were conveyed using ecological or economic frames and highlighted either benefits or losses.

The paper’s “surprising” main finding, according to Hiroyasu, was that ecological messages, both positively and negatively framed, were significantly more effective at motivating the public to support invasive species management than economic messages were.

“I think that that’s particularly interesting because in the environmental field in particular, we talk a lot about how we need to be talking about the economics of any kind of environmental action because people [often] care more about their pocketbooks or they want to know in terms of dollar amounts — a more tangible way to think about problems. And we just didn’t find that to be the case in this for wild pig management,” she said.

This confirmed the investigators’ hypothesis that people’s reactions would follow prospect theory, or “loss-aversion” theory. Also used in economics, the concept submits that people are more emotionally impacted by losses than by equivalent gains, that “the psychological effect of losing $100 is greater than the positive effect of gaining $100,” the authors write.

The paper’s results show that “the public is more concerned with managing invasive species for intrinsic environmental worth than economic benefit and that preventing further environmental degradation is more motivating than promoting additional environmental gains.”

In discussing the “really politicized arena” of climate change, people often look to their political party in deciding whether to support certain policies, Hiroyasu pointed out. This led the researchers to predict that different frames would vary in effectiveness depending on the political leanings of the message’s recipient.

But their findings suggest that the same types of messaging frames can be effectively used to communicate to conservatives and liberals, rather than speaking to each group individually.

“We can talk to everybody at once with one single message, and so that is more efficient for [environmental] managers,” Hiroyasu noted.

Although much of previous work related to message framing and the environment has been focused on climate change issues, Hiroyasu described focusing on messaging surrounding the less politically-charged issue of invasive species management as “really exciting.”

“Invasive species management, or even wildlife management more generally … can be real opportunities to talk either across those party lines or to message multiple parties at the same time,” she stated.

Since public sway can affect the rollout of policies, Hiroyasu stressed the importance of being able to communicate environmental issues efficiently to gain public support.

“Invasive species are particularly difficult and can [create] very time-sensitive problems. And so public support can be really crucial to making sure that any kind of management on the ground is effective,” she said.

“We’re interested in knowing how that method of introduction interacts with talking about the ecological or economic consequences — again, those attribute frames for supporting management.”