The Daily Nexus
Nexustentialism
It's satire, stupid.
Oops! Barefoot Granola Girl Gets Broken Glass in Toe While Walking in I.V.
September 4, 2019 at 4:20 pm by Emma Demorest 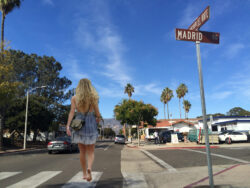 Medics were called early this week to the aid of third-year Gabby Trinkino, whose bloodied foot was hard to ignore by many who passed her by on Pardall.

Trinkino, an environmental studies major, seemed shocked and horrified by her injuries: many shards of beer bottle stuck in her foot.

“I don’t understand how this could have happened,” a tearful Trinkino said as an ambivalent EMT removed a Corona’s shard from her big toe.

No one — apparently — has told Trinkino that this is Isla Vista, and everyone does.

Close friends and roommates of Trinkino told Nexustentialism reporters that she has been an adamant barefooter for about a year, after getting really high and watching a documentary about sustainable living.

Though the dangers of walking around one of the dirtiest towns in America — where vermin rule and lawlessness incessantly ensues — may seem blatantly obvious to some, Trinkino seemed all but unaware.

“I’ve been going shoeless for so long and this has never happened before. I’m like honestly shocked people would just litter like this. Who do they think they are?!”

Though the injury resulted in three small bandages, friends assured our reporter that Trinkino will be telling her harrowing tale — while sipping hard kombucha at band parties — for years to come. Many would assume such trauma would divert Trinkino from ever going barefoot again, but when asked if she would please just wear shoes like everyone else, she flatly refused.