The Daily Nexus
Science & Tech
A Look Into Wildlife Rescue and Rehabilitation at the Santa Barbara Wildlife Care Network
August 22, 2019 at 9:30 am by Emily Komessar

The Santa Barbara Wildlife Care Network (SBWCN) has cared for a whopping 170 different species. Last year, in 2018, it cared for a total of 3,297 patients; this year, it has already taken in over 3,100 patients.

“The only things we are not allowed to care for are adult deer, adult coyotes, wild boar, bears, mountain lions, seals and sea lions. But every other bird, mammal and non-venomous reptile we can care for at the center,” Claire Garvais, communications and development coordinator at SBWCN and UCSB Class of 2018 graduate, said.

That includes pelicans, raccoons, bobcats, hummingbirds, owls and many other species beyond the common duck, opossum and corvid.

When an animal is found, SBWCN recommends putting the animal in a quiet, dark and warm padded box with holes for air to let the animal calm down, refraining from giving the animal food and water and bringing it to the wildlife care center. The animal can be handed off directly at the center — at 1460 N. Fairview Ave. in Goleta — or someone from a team of volunteer transporters can come pick the animal up.

“Animal cruelty is pretty rare around here, and most of the animals that come in are injured by car strikes, cat attacks or window strikes. Those are the three biggest things [why animals come in]. And many are just babies that fall out of the nest a little bit too early,” Garvais explained.

Spring and summer are the height of wildlife baby season, so that’s when the center sees the biggest spike in numbers of patients on site.

Garvais shares some of the more intense rescue stories she’s seen in her time with SBWCN. 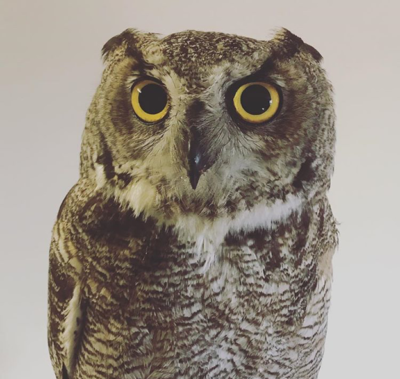 The great-horned owl injured by barbed wire during the Thomas Fire in 2017. / Courtesy of Ojai Raptor Center

Back in December of 2017, off in Buellton, a male great-horned owl had been caught on barbed wire. SBWCN was able to remove the barbed wire piercing through his wing and stabilize him. SBWCN needed to get him to the Ojai Raptor Center for specialized care. This was during the Thomas Fire when roads were closed, so getting him down there was a puzzle.

“The 101 was closed because of the Thomas Fire … [so] we weren’t able to drive him down. So we asked our friends over at the Condor Express whale-watching boat if they would take this great-horned owl aboard the boat and transport him down to Ventura, and they did! … A driver was able to get him from Ventura to Ojai, and the owl rehabilitated well at the Ojai Raptor Center and was released! It was really cool.

Garvais also recalls the story in 2018 of a great blue heron that had been shot four times with a BB gun and was rushed to the care center. Sitting on her nest in Lompoc, the heron had been about to lay an egg. 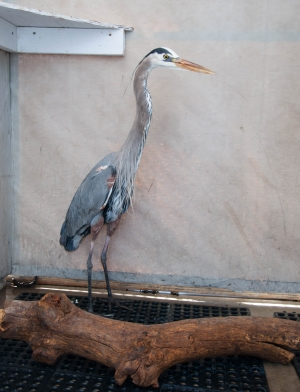 “Herons never lay eggs in captivity. So we were really worried, trying to get her better and out, so that she could lay her egg. We hatched a GoFundMe to try to pay for her surgery, and it was really successful; we raised all the funds we needed to in less than 24 hours, and she got a surgery. All the pellets were removed, and she was looking a lot better,” Garvais said.

As for the health of the egg, the heron was less fortunate.

“Unfortunately, the egg had already died inside of her. But we were able to release her back into a safe area of Lompoc, and she flew away just fine after two and a half weeks of care. We don’t know who would have shot a bird like that, but we’re glad that we were able to get the call and save her.”

If you are interested in volunteering with the Santa Barbara Wildlife Care Network and getting hands-on experience with wildlife, Garvais emphasizes numerous opportunities for you at the center.

The center welcomes committed volunteers willing to work one four-hour shift per week. If you have a car, you can also volunteer as a transporter bringing animals to the center.

“Currently, it is baby season, so there are hundreds of animals on site that really, really need help.  So if you are interested in helping out, now is the best time to do it,” Garvais said.

If you find a wild animal in need, SBWCN’s contact information is provided below: