Independence Day has never been my favorite holiday. Besides, what kind of hardworking American passes up double pay? As such, I spent July 4, 2017 peddling merch at a theme park, not a sparkler in sight.

At the employee cafeteria, my co-worker gazed at the night sky through the glass-paned walls. “I wish I wasn’t working,” she sulked. “I love the Fourth of July.”

I told her it felt wrong to celebrate freedom when so many people in our country are not free.

“Omigosh, you’re so funny,” she said.

I wasn’t joking. The year was off to a bleak start with Trump’s inauguration and immediate issuance of the travel ban. In August, violence would erupt in Charlottesville, Virginia, burning the images of tiki torches and Confederate flags into the collective consciousness of the American people. By December, 2017 would become the deadliest year for mass shootings to date. Grilling hot dogs and belting along to “American Pie” this Fourth sounded like throwing a birthday party in a burning building. 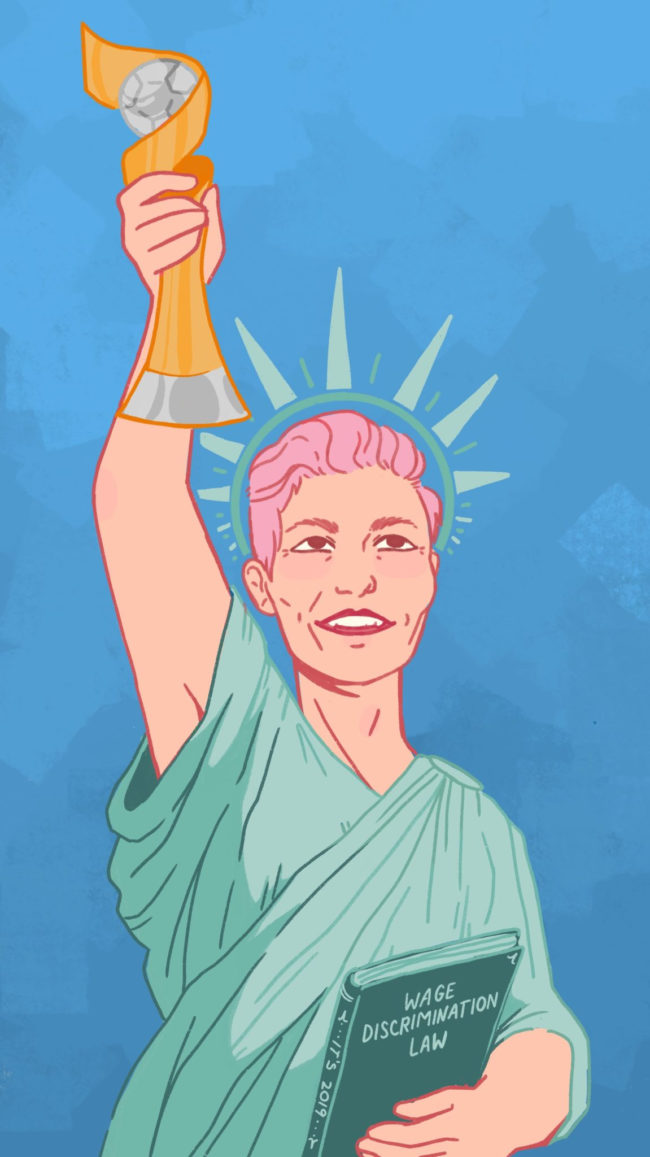 It was the patent symbolism — the bald eagles, the stars and stripes, the garish triad of red, white and blue — that made me uneasy. These were the icons proudly displayed by the neo-Nazis and white nationalists who crawled out of the woodwork and into Trump’s rallies in 2016. With MAGA supporters chanting “Build the wall!” in one breath and “USA! USA!” in the next, the line between patriotism and nationalism was blurry, at least in the public’s perception.

Two years later, in 2019, not much had changed. After watching “Fahrenheit 11/9,” Michael Moore’s 2016 election documentary, I lay face down on the couch, cynicism coursing through my veins. The sea of devastated faces at Clinton campaign headquarters; the corruption festering in our voting system; Obama drinking the water in Flint — these images leached away what little remained of my faith in this democracy.

Three days later, I sat in the same spot, a crowd screaming “USA! USA!” on TV again. Only this time, it wasn’t at a Trump rally. It was at a soccer game in Lyon, France.

A soccer dropout at age 10, I’d never had much interest in “the beautiful game.” I would rather watch “Bend It Like Beckham” than sit field-side at my siblings’ matches. Yet I found myself caught up in the excitement of the 2019 FIFA Women’s World Cup, mesmerized not only by the U.S. team’s athletic prowess, but also by the players themselves.

Social media fed my newfound obsession. I delighted in the training camp vlogs (including one that was filmed at UCSB), player biographies and compilations of funny moments featured on U.S. Soccer’s YouTube channel. I watched these women dominate on the field, crack jokes, work out and sing on buses, cars and planes. Camaraderie was essential to their game: these players were fiercely competitive and fiercely loving of both their sport and one another.

When I read about their fight for gender parity, my admiration grew. Players like Alex Morgan have spoken about how beating the drum increases the pressure to win. Yet not once have they folded — not against the U.S. Soccer Federation, which pays female athletes nearly a third of what it pays males, despite the women’s team consistently outperforming the men’s and generating considerably more revenue — and certainly not against the competition. The team’s victory in the final match amplified the chants of “EQUAL PAY! EQUAL PAY!” that rang throughout Stade de Lyon.

The feud between Trump and the team, which erupted on Twitter, could not have been more symbolic of the political moment. About halfway through the tournament, a reporter for the soccer magazine Eight by Eight asked co-captain Megan Rapinoe whether or not the team planned to visit the White House if they won.

Infinitely more American than the “good old days” of autocracy and white supremacism fondly recalled by Trump is this team’s vision of progress.

“I’m not going to the fucking White House,” Rapinoe shot back. The next day, Trump retorted with, “Megan should WIN first before she TALKS! Finish the job!” Their 2-0 victory in the Cup final — including a goal by Rapinoe — spoke for itself.

Which brings me to the centerpiece of my fascination: the lavender-haired winner of the Golden Ball and Golden Boot awards, the undisputed star of the World Cup and the new face of women’s soccer, Megan Anna Rapinoe.

Though her fame reached new heights during this summer’s World Cup, Rapinoe has been a leader on and off the field for years. In 2016, she was one of five players to file a federal complaint against the U.S. Soccer Federation for wage discrimination and is one of 28 plaintiffs in the lawsuit filed three months before the 2019 Cup. She also sparked controversy for kneeling during the national anthem in support of Colin Kaepernick at a Seattle Reign game in 2016.

“Being a gay American, I know what it means to look at the flag and not have it protect all of your liberties,” Rapinoe said afterwards. “It’s important to have white people stand in support of people of color on this.”

As a team spokesperson, Rapinoe leads with grace and an effervescent sense of humor. She doesn’t talk trash — not even about the head of the U.S. Soccer Federation, Carlos Cordeiro, who was booed by the crowd at the team’s post-victory New York City ticker-tape parade.

In a rousing victory speech, Rapinoe addressed, among other things, the diversity of the team: “We have pink hair and purple hair. We have tattoos, dreadlocks. We’ve got white girls, black girls and everything in between. Straight girls, gay girls.”

Observing the reactions of the crowd, itself a mishmosh of young and old, white, brown and black, I cannot overstate the importance of this message. Highlighting this intersection of identities is not just preaching to the liberal choir or a PR stunt. The U.S. women’s national team paints a far more accurate picture of America than the almost exclusively white-male Trump administration does. Its players embody the values of compassion, honor and resilience that are so lacking in our national politics.

Megan Rapinoe’s dissent — and absolute kickassery — is a form of patriotism that I can get behind.

Not only is it essential that Americans see themselves in this team but also that the world see America in this team. Broadcasted on hundreds of networks and reaching a record number of viewers (approximately 1 billion) worldwide, the World Cup winning team represented an America that other parts of the world may not otherwise get to see.

Infinitely more American than the “good old days” of autocracy and white supremacism fondly recalled by Trump is this team’s vision of progress. “This is my charge to everyone: We have to be better. We have to love more, hate less. We’ve got to listen more and talk less,” Rapinoe said as she neared the end of her speech. “It’s our responsibility to make the world a better place.”

Following Team USA’s triumph, much champagne was spilled and “We Are the Champions” sang. But their victory was a celebration of female friendship, sportsmanship and hard work, rather than the boastful nationalism that often colors patriotic rhetoric.

As much as I love watching these athletes play, I value them more for what they inspire. And I don’t just mean the children who dream of going pro — that doesn’t account for their devoted fan base or the millions who tuned in to watch the World Cup.

They inspire me to make the most of the platform I have to advocate for what I believe in. I may be too far gone for the soaring idealism of the American dream, but Megan Rapinoe’s dissent — and absolute kickassery — is a form of patriotism that I can get behind. Her courage moves me profoundly, evoking the same feeling the national anthem used to, the feeling of belonging to something bigger than myself — if not to a country, than to a dream. I am learning that the two are not mutually exclusive.

In the fall, I will be studying abroad. I used to joke that when asked where I’m from, I’ll just say “California” to avoid being associated with Trump’s America. But now, knowing that this is also the America of the U.S. Women’s National Team, red, white and blue — with a dash of lavender — doesn’t seem so bad to rep after all.

Here’s to you, USWNT. May we all live up to the four stars on your jerseys.

If anyone has connections to Megan Rapinoe or the World Cup ticketing office, please contact Harper Lambert immediately.

The Signs as Things You Find at a Yardsale

A locked trunk full of secrets

My framed photograph of Spock