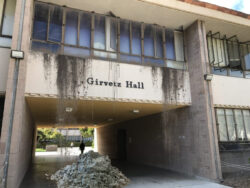 Though many students think of summer as providing perfect day-drinking weather and not much else, it is also prime time for renovations across campus. As if there weren’t enough construction projects during the regular school year, UCSB seems to find summer the optimum time to showcase the incomplete nature of the school — perhaps to give incoming freshman at orientation a taste of what it feels like to live in a postmodern episode of “Bob the Builder” that is focused on higher education and occasional drug abuse.

One of these necessary renovations announced was the recent approval of several gleaming new tons of dust that will be spread all across Girvetz Hall throughout the summer. Those Gauchos who have been blessed enough to have had a discussion section or even a lecture in Girvetz are no stranger to the dusty wonderland that welcomes them when walking into this hall. Along with this renovation adding to the prestige of our school, representatives from the Chancellor’s office reassured the public that the money being used for this project is, of course, coming from our student fees; but representatives say not to worry, because the whole idea for this surprise improvement to such a famous hall is to further remind humanities students that they are grosser and dirtier than S.T.E.M. majors.

Along with these statements, UCSB officials remarked that they, “… legitimately don’t know how Girvetz could look worse, so why the fuck not … ,” approving this proposal quite quickly. Despite the lack of an actual reason for the project, there seems to be very little resistance against it. To get a feel for why there was a lack of outrage over such a blatant waste of money, we at Nexustentialism asked a couple students for their opinions on the renovations:

“I just don’t care what happens to Girvetz,” fourth-year student Anita Rihmie stated. “Like, I don’t think I could think of a more inconsequential building. It coulda been lost in the Thomas Fire, and I don’t think anyone would have noticed.”

Second-year student May Jerbaut responded to our inquiry by saying, “If it were any other place using the money I pay to fund this, I’d be upset. But it’s UCSB, and I’m pretty sure our school would have sponsored the Fyre Festival given the choice to.”

With these very colorful opinions regarding the new renovations in mind, check back here for future updates on how much grosser Girvetz can possibly get before it is officially quarantined.

Ryan Milton blames one out of his two autoimmune diseases on Girvetz Hall.