There’s a specific interaction that I have come to dread. It usually begins with someone offering to buy me a coffee or make me food, which I then must find a way to politely decline. I typically stick with something simple like, “Thank you, but I already ate” or “Oh, I just can’t have dairy.”

In actuality, it’s because I am vegan. As a rule, this means I can’t eat anything that may contain meat, eggs or dairy products. I choose not to tell people this immediately because honestly, I’m embarrassed. It’s much easier to just avoid the follow-up judgements that ensue from being associated with vegan culture. 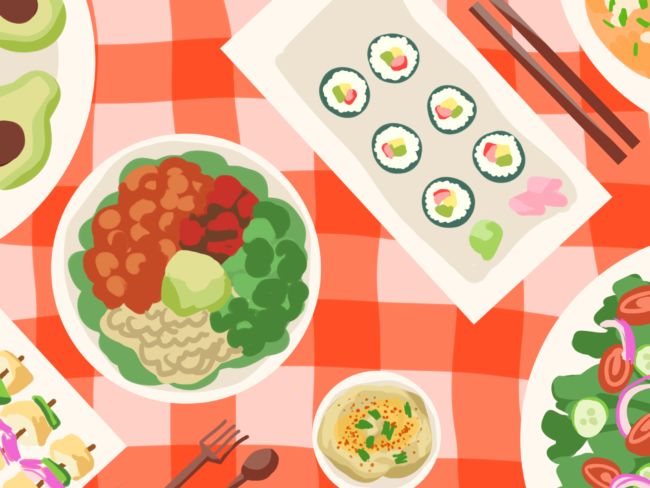 Believe it or not, I’m actually very proud of maintaining a vegan diet. I chose to incorporate this change into my life after several years of being vegetarian for both animal rights and health reasons. After almost two years of being vegan, I can confidently say it is the best option for me personally. However, I am ashamed of what being vegan means in today’s society.

It has increasingly become a trend for vegans to be extremely judgemental toward both other vegans and non-vegans. The term “vegan” itself is synonymous with a culture of characteristics that don’t necessarily apply to me. Many people in this community seem to believe that going vegan means not only changing your eating habits, but also the way you act, dress and make life decisions. There are blurry expectations when it comes to what vegans are supposed to refrain from. If you can’t eat animal products, does that automatically mean you can’t wear clothes made from animals or patronize businesses that serve meat?

Personally, I don’t understand this logic. Being a vegan means something different to everyone and doesn’t always have to do with animals. Many people choose to go vegan simply for the benefits it brings to the environment. Going vegan and avoiding the farm industry significantly reduces our carbon footprint and water usage. Other people may maintain plant-based diets simply for the health benefits. Avoiding meat alone is proven to reduce the chance of heart disease, lower blood sugar, decrease the risk of cancer, improve kidney function and lengthen your lifespan. If there is such a wide variety of reasons people choose to go vegan, why should they all be expected to live a specific way?

In fact, I have even faced criticism from other vegans for not being “vegan enough.” The most common thing I have been questioned about is my choice to wear makeup. Knowing that many high-end makeup brands test on animals, I do make an effort to purchase products that are cruelty-free. However, I can admit that there are exceptions in my makeup collection. The issue I have with this criticism is that it implies that eating vegan means you must advocate for animal rights at all times, in all aspects of your life. It’s extremely frustrating that the positive impact my eating habits create is discredited just because I haven’t fully adapted to a certain lifestyle.

No one wants to be told the way they are living their life is wrong, especially when it’s coming from someone who acts superior.

I also don’t support the approach that many vegans take to promote their ideas. Instead of setting a realistic example of how people can succeed on this diet, many vegans are preachy and resort to shaming those who eat meat by calling them “killers.” What these extreme individuals need to understand is that the majority of people do eat meat. Insulting them for something that is considered very normal by society is not a viable way to spread veganism. As a vegan myself, I can admit that this lifestyle is not for everyone, and that’s okay.

These extremists are perceived to represent all vegans and are responsible for the negative reputation we have today. These misguided individuals place veganism on a pedestal by espousing unrealistic expectations for how everyone should act. No one wants to be told the way they are living their life is wrong, especially when it’s coming from someone who acts superior. Not only has the negativity surrounding vegan culture turned people off to the idea of going vegan; it’s also made veganism seem completely unattainable. While I’m not ashamed of maintaining a vegan diet, I am ashamed of how this culture makes all vegans appear.

In order to defy these stereotypes, I try to exemplify that veganism is achievable and doesn’t require you to make catastrophic changes to your lifestyle. Any effort you put into reducing your meat and dairy intake makes a difference, even if that means just a Meatless Monday every few weeks.

Adopting a more welcoming and realistic approach to spreading veganism will be more successful than shoving it in people’s faces. Going vegan is a personal choice, and again, it’s not for everyone.

At the end of the day, being vegan just means abstaining from consuming animal products. It doesn’t have to be as extreme as some vegans make it out to be.

Paige Holloway is a vegan who believes that vegan extremists should take a chill pill.

If you care about animals and feel compelled to defend them, chances are you’ve come across knee-jerk accusations claiming you are “pushing your agenda,” forcing your ideas down their throat,” or “spreading propaganda.” So, why don’t other social justice advocates face the same accusations? It is very telling that human rights activists who campaign against violent and exploitative practices, such as sweatshop labor or sex trafficking, are rarely, if ever, criticized for pushing their beliefs on others. On the contrary, these activists are often lauded for their passion and commitment to justice and for exposing injustices. So, why is it… Read more »

Typical radical PETA type. Your kind do more harm for the vegetarian/vegan movement than good. Thanks alot, Robert.

Well said, Robert. It’s nice to see another activist who stays true to their moral beliefs.

In truth, veganism does not appear to recognize any real commitment to minimal harm. How often do you read about “vegan” beer, wine, or cheese? All of these products are unnecessary luxuries and, like every agriculturally grown product, result in the destruction of entire ecosystems where they are grown. The first step in establishing any field is to eliminate every wild plant and animal on the landscape converted to that purpose in order that these will not compete with the intended crop for energy, mineral and water resources. The elimination of these creatures is no regrettable accident–it is predictable and… Read more »

As a vegan, I despise anal-pores like Mr. Grillo.

I’m sorry but I agree with Robert. Speak and shout for the voiceless animals.

I am a lacto-ovo vegetarian, I did it for health reasons primarily. Researching about my type of vegetarianism on YouTube leads to surprisingly few results, mostly because such videos are pounced upon immediately by holier-than-thou vegans. It kind of reminds me of super-fundamentalist Christians who love to wag their fingers at mainstream Christians, saying “You’re going straight to Hell because you don’t worship God the way that I worship God. If you don’t believe me, just pick up your Bible and read (scripture #1, scripture #2, scripture #3,… scripture #782, etc.)”. We live in an age of intolerance, I know.… Read more »