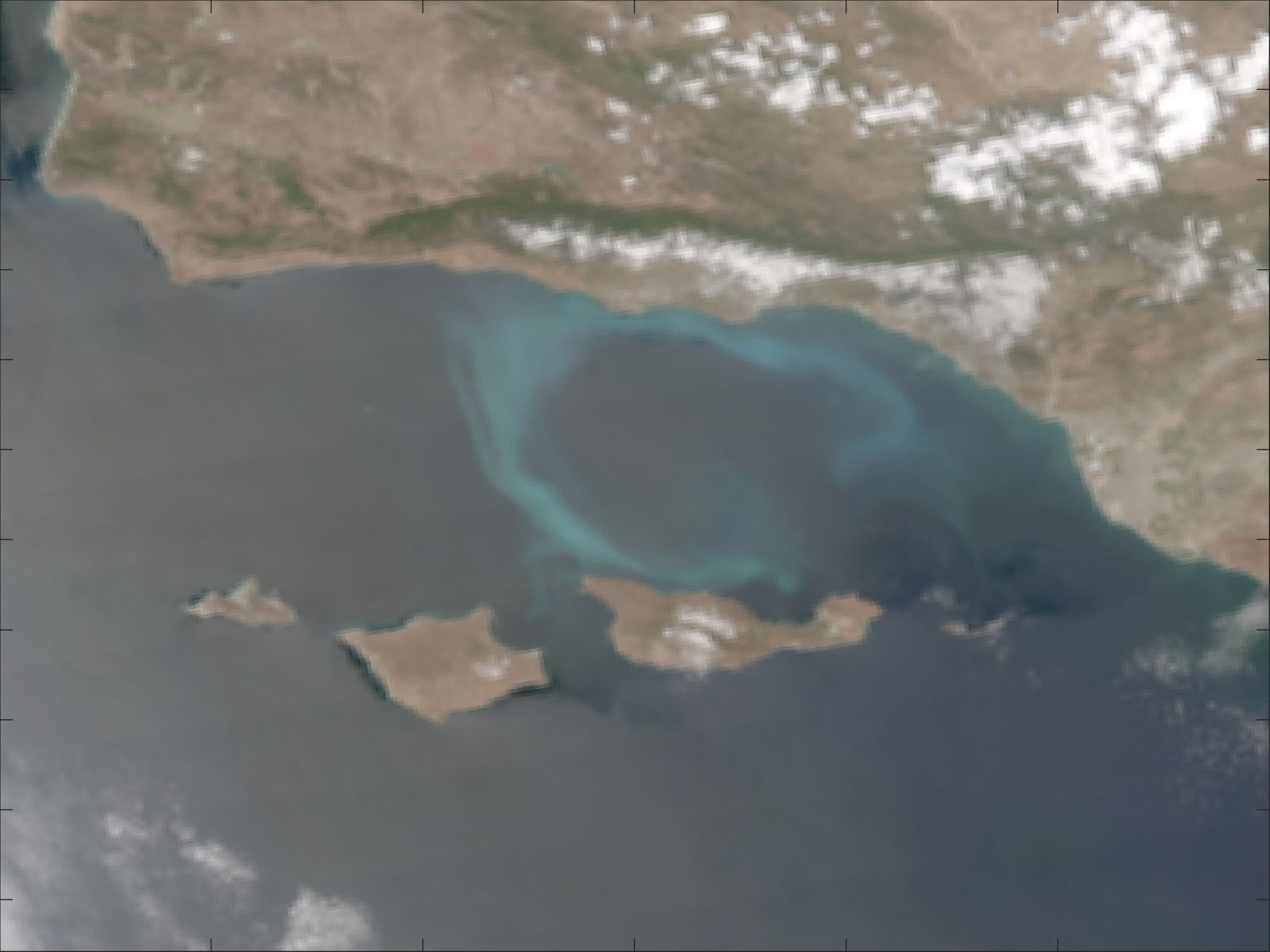 The coccolithophore bloom in the Santa Barbara Channel in June 2015. / Courtesy of Paul Matson

A combination of conditions during May and June of 2015 made the Santa Barbara Channel shimmer with a turquoise hue that was more reminiscent of a tropical paradise or a glacial lake than a strip of California coast.

Now, a team of researchers working with Dr. Debora Iglesias-Rodriguez of UCSB’s Ecology, Evolution, and Marine Biology (EEMB) Department has found the answer as to why: an unprecedented coccolithophore bloom in the Santa Barbara Channel.

“We’re both very interested in coccolithophores, and one day, there were reports of the water looking a strange turquoise color,” Paul Matson, a postdoctoral researcher and lead author of the paper published in the Journal of Geophysical Research: Oceans, said in an interview with the Nexus.

“It’s weird; it looked very similar to coccolithophore blooms which Dr. Iglesias-Rodriguez studied before in the North Atlantic.”

Coccolithophores are a type of small phytoplankton, or microscopic algae, covered in chalky plates of calcium carbonate. Although they are usually present in the waters off of California, it is rare for them to be found in the abundances that Matson and his peers observed.

Coccolithophores turn water turquoise during bloom events because the chalk from their plates reflects a particular wavelength of sunlight. This coloration in other turquoise regions can be attributed, yes, to coccolithophores, but also to the depth of water as well as dispersed or settled sediment such as rock flour.

“We were really excited to see this happening. This happened to occur when we were observing abnormal environmental conditions,” Matson said.

“There was an event called the ‘Warm Blob’ in 2014 where we saw massive warming in the northeastern Pacific, and following that was the 2014 El Niño event which happened along the coast.”

“It needs to have stratified water, which you tend to find in the summertime here. Stratified water is not really well-mixed. You have these different layers of water masses; coccolithophores tend to bloom up in the surface when you have stratification,” Matson explained.

These appropriate climatic conditions set into motion a chain of events which precipitated the abnormal coccolithophore bloom.

“We had these warm water conditions. Along the coast of California, there’s a nice correlation between lower temperatures and the amount of nutrients you have, because the nutrients are coming up from deep water through upwelling,” Matson said.

These low-nutrient conditions coincided with diatom blooms. The rapid population growth of diatoms, or single-celled algae, used up much of the nutrients which were present in the water initially and left very little remaining once their bloom concluded.

Coccolithophores do not need as many nutrients to thrive; an environment with a dearth of nutrients actually benefits them because these conditions snuff out would-be competitors, giving them much more room within their ecological niche to grow.

“They were able to expand their population without having to compete with the diatoms. It was the perfect environment for a coccolithophore bloom to happen,” Matson said. 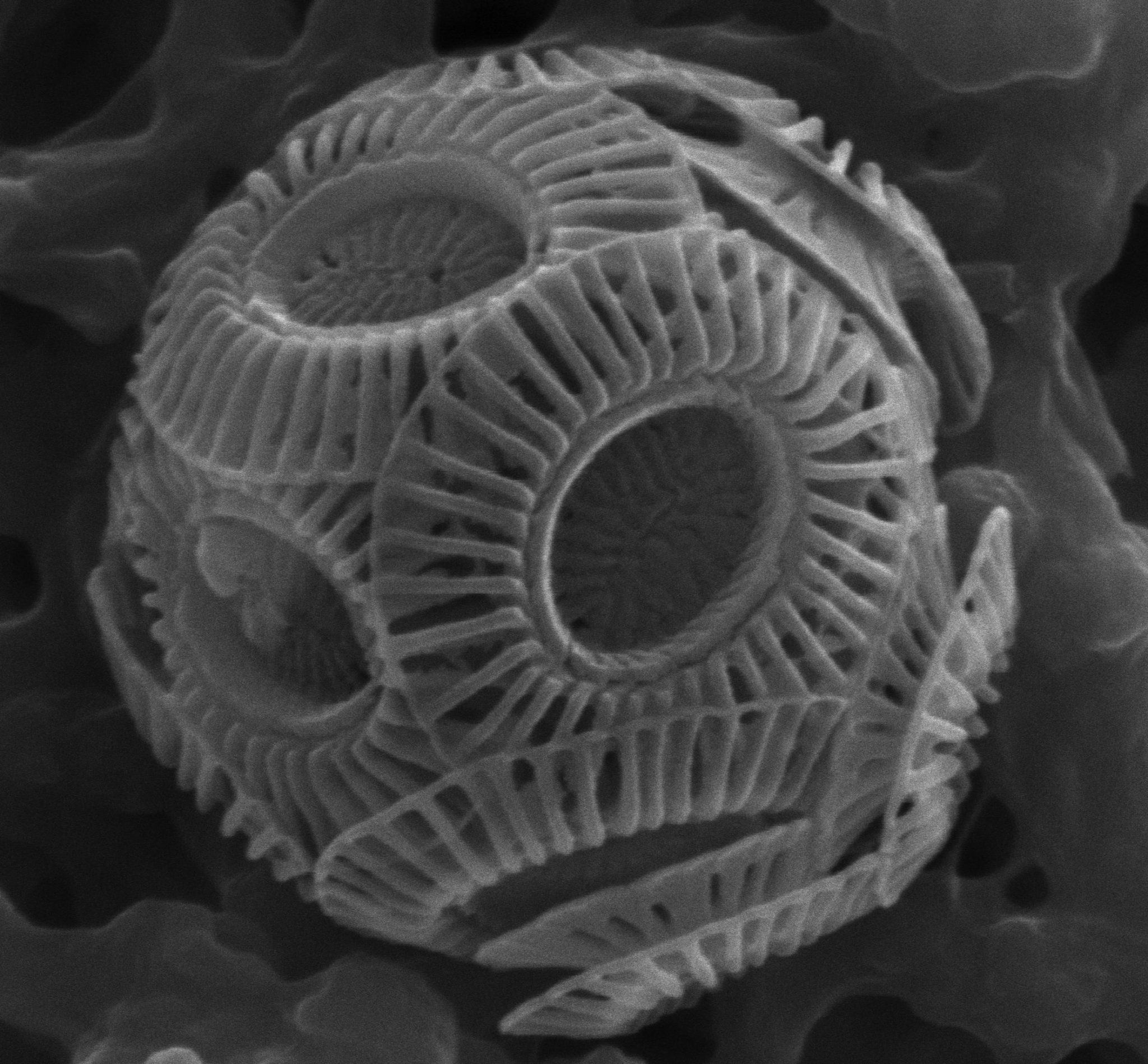 The researchers employed scanning electron microscopy to confirm the presence of coccolithophores and collaborated with other scientists to document the spatial distribution of the bloom and its movement in accordance with current.

“We used information about surface currents — how water was moving and how fast it was going — and we were able to do simulations regarding how the water parcels the particles and moves them around, hour by hour and from one day to the next day, to see how the bloom was being pushed around off the coast,” Matson described.

It was especially fortuitous that the bloom occurred in the Santa Barbara Channel, a strip of coast which has been subject to close monitoring.

“If this had occurred further up or down the coast where we didn’t have this data, we wouldn’t know what the background conditions were like, and we couldn’t generate a data set with regards to how blooms form and move around.”

“We’re able to piggyback on that information. The bloom happened to occur in a region we have been actively studying for years,” Matson said.

“One of the really cool things about this is that we’ve had people doing long-term monitoring in this area for a long time, and this allows us to form a baseline of conditions. When we have a really rare event, it gives us a starting point to understand what is happening differently now,” Matson said.