A year ago, Cigna posted its U.S. loneliness index which reported “epidemic” levels of loneliness in America. Interestingly, some groups were shown to be particularly susceptible to loneliness. Out of the occupational categories listed, which included retired, employed, homemakers, students and unemployed, students and the unemployed had the highest average loneliness scores. Loneliness was also found to increase with each progressively younger generation, starting with the least lonely Greatest Generation and ending with the most lonely Gen Z.

As a member of Gen Z, being labeled the loneliest generation is tough. I associate my generation with a number of traits: tech-savvy, connected (online), emotionally confused and burdened with high expectations — traits that don’t seem to perfectly mix with loneliness. The whole topic of loneliness, as far as human interaction and emotions are concerned, is not explicable in a simple or objective way. But we can approach it by looking for answers in surveys and studies, using their definitions of loneliness. 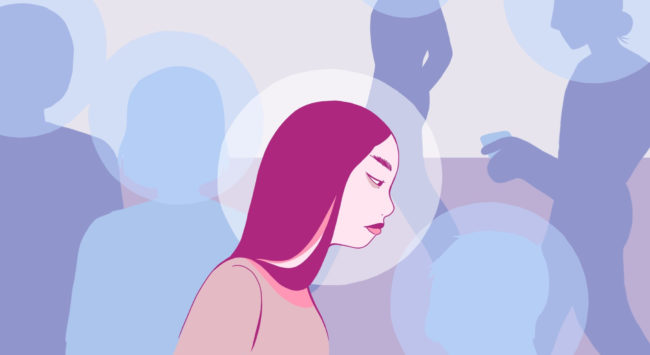 An easy starting point is to look at how loneliness negatively affects us. A review of scientific literature on loneliness concluded that the “heightened risk for mortality from a lack of social relationships is greater than that from obesity,” and comparable with other “well-established risk factors for mortality.” It also recommended adding social isolation and loneliness to lists of public health concerns. Loneliness also harms our lives by causing anxiety, sadness and perhaps jealousy and anger.

How can we address our loneliness? To start, we can examine factors which correlate with feelings of loneliness, many pertaining to physical and mental health. For example, the Cigna study found links between loneliness and imbalances in work, sleep, family time and exercise. It also found connections between the frequency of personal interactions and one’s health. Among the respondents who self-identified as having fair or poor health, 31% experienced daily in-person interactions, whereas 58% of those self-identified as being in good, very good or excellent overall health experienced daily in-person interactions.

Individuals who were not content with their relationships scored 13 points higher on the loneliness scale than those who reported to be content — a simple yet important reminder that not any in-person interaction will do. These interactions should be meaningful and positive. This fits with the phenomenon of emotional contagion, which predicts that if we spend time around negative people, we feel similarly negative. Conversely, if we spend time around positive people, we feel similarly positive. We can institute this by seeking out more meaningful interactions and removing ourselves from toxic relationships.

We can also work on changing our mindsets which may be leading us to feel lonely. In his 1970 book The Pursuit of Loneliness, sociologist Phillip Slater argued that the value America places on independence and the loneliness of its citizens is “rooted in the attempt to deny the reality of human interdependence.” It’s a compelling idea; I think especially teenagers, who are still forming their identities, are strongly drawn to independence and individualism.

As a college student, I have a platform for viewing this problem. I think that as Slater suggests, extreme individualism is often the cause of loneliness, and it runs on our egos. Perhaps we say we are happy being alone as a justification for our failures to make meaningful connections, or because we are afraid or simply too lazy to form meaningful connections. Or perhaps it is sometimes a means of rebellion, in order to prove our worth to ourselves or our parents. Maybe loneliness is just built into our culture, and we feign values of individualism simply because we know no other way of living.

I state this as strongly and clearly as I can: if you feel lonely, do something about it.

Whatever pathways we imagine connect our attitudes to our loneliness, it is fair to say they are obstacles in our pursuit of good health and well-being. Take individualism, for example. It is commonly regarded as a positive value, that we should live by the cliché, “just be yourself.” But when taken in a way that suggests we should isolate ourselves from others because we are self-sufficient, such an interpretation becomes obnoxious and self-harmful.

So, there are two broad ways that we can chase away loneliness: we can change the aspects of our lives that statistically correlate with feelings of loneliness and we can change our mindsets which may be causing loneliness. But even with indications as to how we might chase away the lonely feelings, this knowledge is meaningless without action.

I state this as strongly and clearly as I can: if you feel lonely, do something about it. If you have an issue in your life, do something to fix it. It can start with simply researching what to do. It can start with some of the suggestions in this article. I think we are all too often fed the narrative that social issues should be blamed on our physical environments and social settings. Surely, we can trace our issues back to those, as they are what shape us. But responsibility starts with accepting our environments and working to change them or ourselves if that is what we desire.

I am discomforted by the thought that we are lonely because we are apathetic and practice avoidance behavior. Hiding from our personal problems won’t make them go away. I do not want to be a part of the loneliest generation because loneliness is contagious, and I constantly hear peers complain about being lonely and having poor mental health.

If you take nothing else from this article, I think a possible solution to loneliness can be found in a short phrase: be open, be genuine and value others as much as you value yourself. Rather than living in a pursuit of loneliness, we can try to find happiness in the pursuit of each other.

Brian Do wants students to take a more proactive approach toward improving their mental health. More of his writing can be found at goodnightpost.com.

This generation will be labeled the whiniest.