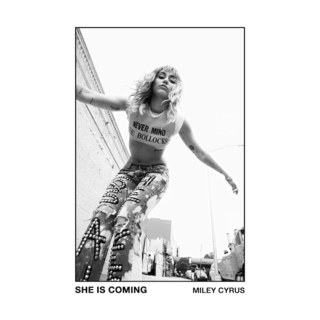 After much anticipation, Miley Cyrus released her latest studio album, “She is Coming.” The six-track project is slated to be a trilogy, with two EPs set for release in the near future.

The first track in the album, “Mother’s Daughter,” has a rock ‘n’ roll flair with memorable lyrics such as, “Don’t fuck with my freedom/I’m nasty, I’m evil/Must be something in the water or that I’m my mother’s daughter.”

The song’s catchy chorus and blunt lyrics are captivating and addictive — it’s a tune to be listened to on repeat. Cyrus, always unapologetically herself, executes confidence and power in “Mother’s Daughter” with a feminist perspective as well. Her “freedom” refers to topics such as women’s rights to abortion. “Unholy” is another track in which Cyrus dishes about her relationship with the media, specifically her getting shamed for drinking and partying.

The next song “D.R.E.A.M.” (Drugs Rule Everything Around Me) goes deeper into her relationship with drugs. “D.R.E.A.M.” is a reference to the Wu-Tang Clan classic “C.R.E.A.M.” (Cash Rules Everything Around Me). Cyrus’ track even features a verse from Wu-Tang’s own Ghostface Killah at the end. The song has poignant lyrics such as, “We’re all trying to fill the lonely,” illustrating how Cyrus possibly numbs herself with drugs.

At its halfway point, the album clearly transitions to a more upbeat mood with the cut to “Cattitude.” Ru Paul is featured in this song, delivering a combined pop and rap style. With bold lyrics such as, “I love my pussy, that means I got cattitude,” Cyrus speaks on her sexual freedom while paying homage to her country roots. Other lyrics such as, “I love you, Nicki, but I listen to Cardi,” are ironic as Cyrus emphasizes the issue of artists with similar genres always being compared to one another instead of celebrating their individuality.

“She is Coming” is also fitting for a summer soundtrack. “Party Up the Street” is a song you’d listen to on a laid-back summer night when you go to a kickback down the street to hang out with your summer crush. Cyrus gives off a pop-folky vibe that is complemented by Swae Lee’s contemporary hip-hop sound.

The singer’s final track is different than the rest of the album. “The Most” reveals Cyrus’ vulnerability, as she sings about hurting and disappointing the person who loves her the most and not giving up on love. The lyrics could be based on Miley and Liam Hemsworth’s relationship; the two were on-and-off for a while but finally married last year.

This album is unlike any other project Cyrus has released before. One could argue that you wouldn’t expect some of these songs to be on the same album, but that’s what makes this album intriguing. “She is Coming” cannot be categorized into one genre; the album’s myriad styles highlight the many sides of Cyrus. Instead of releasing an album that appeals to industry standards, Cyrus released a work of art that is honest and raw.

She is a pig