The Daily Nexus
Sports
Quite the Introduction: Ryan Wilcox and Caitlyn Snyder Named Freshman of the Year
June 8, 2019 at 10:49 am by Richard Benites and Nithesh Perumal 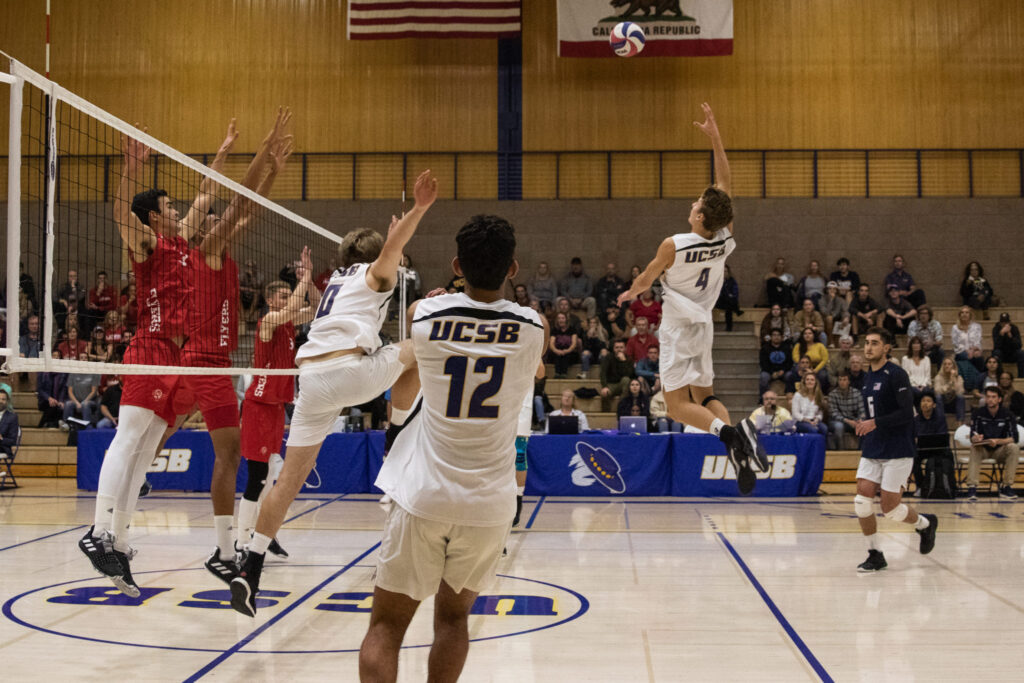 Although the season may have not finished quite as planned for the men’s volleyball team, the Gauchos still played their hearts out and gave us an NCAA top five finish to celebrate. In addition, many bright spots were featured along the way as this talented young roster showed us that the program will be in safe hands for years to come.

Particularly, UCSB was able to achieve what they did thanks in part by their freshman outside hitter Ryan Wilcox.

Hailing from Honolulu, Hawaii, Wilcox’s journey to Santa Barbara began during his high school career at Punahou — where he was named two-time Hawaii State Player of the Year and helped bring his team several Hawaii State Championships.

Wilcox started his rookie year for UCSB in the team’s first competitive game of the season where they took on Harvard at home. This non-exhibition matchup resulted in a five-set thriller, which favored the Gauchos by a 3-2 result; Wilcox only played in two sets for his competitive debut but still managed a statline of third-most kills on his team with eight on the day, foreshadowing his productive potential and what was to come.

As the regular season progressed, so would his production. Ultimately, Wilcox’s impact started to be reflected in his playtime as he’d eventually become a regular starter for the squad.

But his spectacular performances weren’t limited to just the regular season; Wilcox arguably played his best volleyball when it mattered most during UCSB’s postseason campaign. Playing a crucial role in the Big West Conference quarterfinal against CSUN, Wilcox would go on to achieve a man-of-the-match worthy statline with a team-high 12 kills to his name — leading the Gauchos to another nail-biter of a victory at 3-2.

Altogether, Wilcox’s final overall stats place him as UCSB’s second-highest in kills, with a total of 254; keep in mind, this was only his first season with the program. Not to mention, his 13 assists also lead all non-setters — perhaps a future at that position? Not really though.

We’ll take the Gaucho outside hitter, Ryan Wilcox, 10 times out of 10, which is why he’s the Daily Nexus’ choice for Freshman of the Year.

Collegiate athletics are on a whole different level than high school – with competition that is bigger, faster, stronger, and smarter. Collegiate athletics takes the top 2% of up and coming high school competitors and pits them against each other with extremely high stakes. As  expected in this demanding environment very few players make and immediate contribution to a winning team.

Caitlyn Snyder has been a far cry from this prototypical freshmen athlete many come to expect. Throughout the season the Freshman Utility has consistently found a way to make her team better every time she in the water.

Playing in every game this season, Snyder has been one of the biggest driving factors in the dominant success the ‘Chos have had this season. Going 22-8 is no easy feat even for the most experienced veteran teams – yet this team powered by their young core headed by Caitlyn Snyder has been able to find a large amount of success.

Posting an impressive 30 goals and 33 assists, Caitlyn Snyder is the third highest offensive contributor on her team only slightly behind Upperclassmen Utilities Kate Pipkin and Sarah Snyder.

What makes Caitlyn’s game so impressive is her ability to do a little bit of everything on the court. Her ability to not only score the ball but also set up her teammates serves as an invaluable resource to this Gaucho team who have struggled on the offensive side. On top of her offensive contribution, Snyder posted 19 steals this season showcasing her ability to dictate the flow of the game on both sides of the game.

Snyder has also shown an affinity for the spotlight, and always plays up to the moment. Caitlyn posted a hat trick against Cal State Northridge to close any chance of a CSN comeback, which paid off heavily in seeding. In the Big West Quarter Finals her balanced attack with 2 goals and 2 assists helped pick apart an LBSU team that was unable to scheme against her phenomenal performance. Despite how bright the lights shine, Snyder always manages to let her game shine brighter.

Snyder has developed into such an imposing player that teams found themselves having to go out of their way to mitigate her impact on the game. The presence that she commands in the water frees the rest of the team to play at an elite level. It is well within reason to conclude that the team is at their best when Snyder is at her best.

Over the course of this season Caitlyn Snyder has shown she is ready for what collegiate athletics will throw at her. Time and time again Snyder has been counted on as an integral piece in the Gaucho machine that rolled through the Big West to a third place finish. With her elite level play and a year for the team to develop their chemistry expect the ‘Chos to be playing for that number one spot.

Her consistent production on the court despite playing elite competition and her all around game which emphasizes her impact on every game subsequently gains her a much deserved spot on the Big West All Freshman Team.