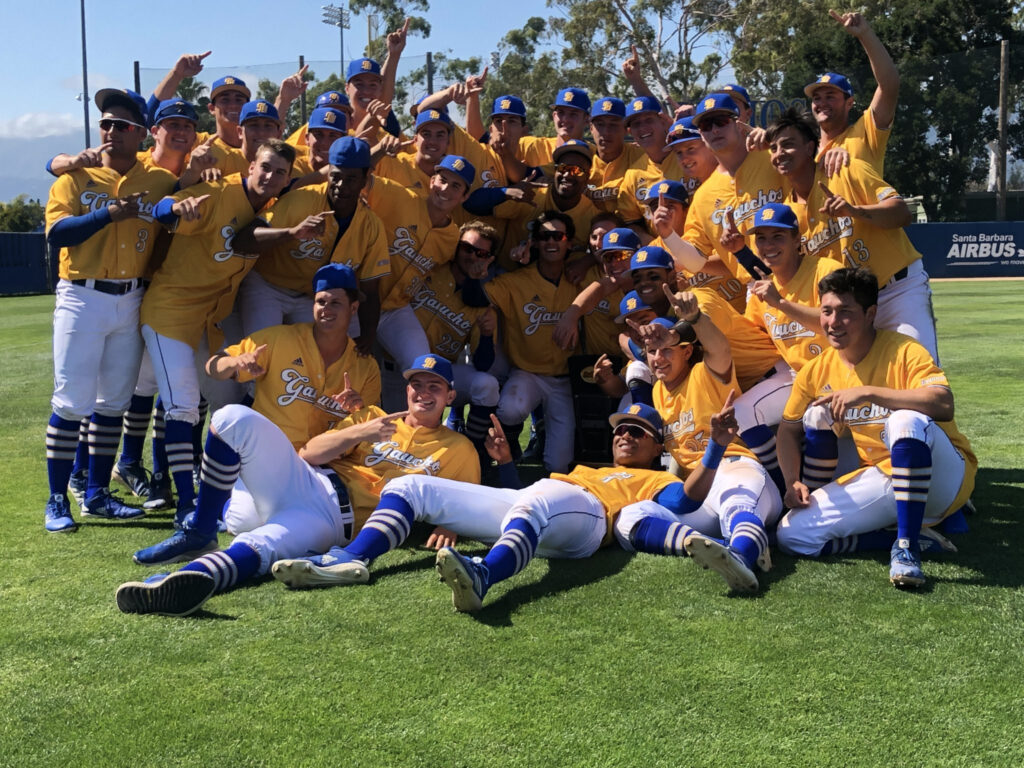 This is the third conference title in program history. Jorge Mercado / Daily Nexus

With 45 wins and its first Big West title since 1986, the UCSB baseball team is one of the hottest teams heading into the NCAA Tournament this weekend. The team will be taking on Fresno State in the first round of the double-elimination Regionals.

2016 was the last time Santa Barbara made it to the NCAA Tournament. That year, UCSB went to its first-ever College World Series.

Santa Barbara’s 45-9 mark this season was not enough to host a regional, but still enough to clinch a No. 2 seed in the Stanford Regional. Their opponent, the third-seeded Bulldogs, finished the season 38-14-1 overall.

Other opponents the Gauchos could face this weekend include the hosting team, No. 11 Stanford, who earned a 41-11 overall mark and fourth-seeded Sacramento State who concluded the year 39-23 overall.

Despite being a hot squad, UCSB is still coming off a tough-series loss against Cal Poly. The Gauchos won the final game of the three-contest set to clinch the Big West title, but the two losses are probably what cost them a chance to host the regional.

Regardless, UCSB is now looking ahead to its first opponent, Fresno State, a team it is pretty familiar with. The two teams met last season with each taking a win in their respective home game. The Gauchos and the Bulldogs have also met twice in postseason play with both victories going to Fresno State.

The Bulldogs will come into this contest hot, winning seven straight and nine of their final 10 games of the season which included a win in the Mountain West Championship Game.

Fresno State is led by a powerful pitching staff which includes the Mountain West’s Pitcher of the year, Ryan Jensen. The junior righty led the NCAA in wins with 11 and had an outstanding 2.82 ERA with 99 strikeouts. He will be starting on Friday.

The other dangerous Bulldog pitcher is junior Davis Moore. The righty tossed 83 innings on the year earning 83 strikeouts and a 4.12 ERA.

Both pitchers helped pace a team ERA of 3.72 and helped the team give up just an average of 4.2 runs per game.

That staff will be tested, however, going up against the Gauchos’ offense. UCSB led the Big West in batting average, on base percentage, slugging percentage, runs scored, hits, doubles, triples, home runs and stolen bases.

Santa Barbara’s offense is led by junior catcher Eric Yang who was most recently named the Field Big West Player of the Year.

Yang was one of a program-record 13 UCSB players to earn 13 All-Big West selections.

Other notable winners include junior outfielders Tommy Jew and Armani Smith, who earned All-Big West First Team honors. Jew was second on the team in home runs with 11 while Smith batted .325 on the year after successfully getting a hit in 17 of his last 19 ball games.

Overall, UCSB has proven a lot this season but the truth is this team has some high expectations. The 2016 College World Series team was a bit of a surprise but this Gaucho team really feels like a squad capable of winning the big one.

The last time any UCSB program won a national title was in 2006. The baseball team’s quest to become the next begins this weekend.

UCSB faces off against Fresno State at 7 p.m. on Friday, May 31 at Sunken Diamond located at Stanford University. The game can be streamed on ESPN3.com.