The Daily Nexus
Sports
NBA Finals Preview: The X-Factors
May 30, 2019 at 12:58 pm by Richard Benites and Jesse Morrison 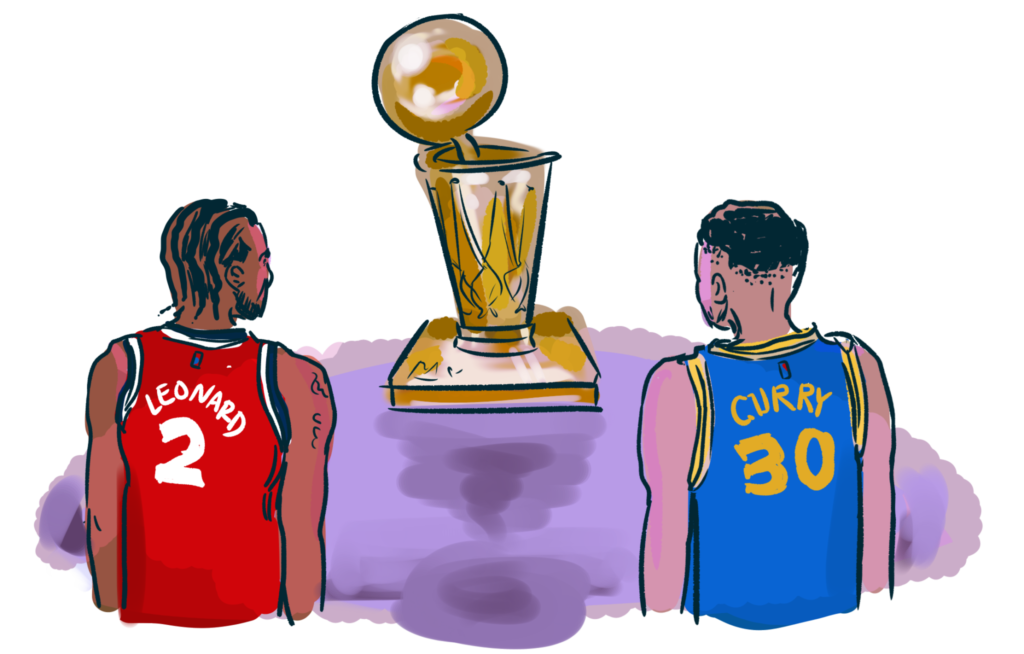 With the 2019 NBA Finals commencing this week, there’s plenty to be excited about as several captivating storylines are set to unfold.

Although the Toronto Raptors’ underdog narrative is proving to be an exciting one, there may be much more on the line for the reigning champions, the Golden State Warriors, as they’ll be searching for that finals three-peat. Accomplishing this will be no easy task, but the following X-Factors just might be the deciding catalyst that’ll put the Warriors over the top.

We all know that Golden State’s Splash Brothers duo of Stephen Curry and Klay Thompson will be electric on offense come tip-off time. However, as the old sports adage goes, it’s defense that wins championships and one Warriors player especially stands out in this field.

Draymond Green’s legacy doesn’t only end at three-time NBA Champion, three-time NBA All-Defensive First Team and the 2017 NBA Defensive Player of the Year — but it does give you a good idea of his elite repertoire.

Green is known around the league for his fiery passion and explosive play on the court, especially as of late when considering his recent string of performances in this year’s playoffs. Notably so, he’ll be entering the Finals series in fine form as he’s coming off a spectacular Western Conference Championship performance against the Portland Trailblazers, where he tallied 16.5 points per game, almost nine assists and 12 rebounds.

This ability to show that he can produce on both ends of the court makes Green a significant X-Factor that the Toronto Raptors must take into account. Not to mention, he may have a good shot at Finals MVP — that is, if the next X-Factor doesn’t suit up in time for this series.

As the current all-around best player in the league, Kevin Durant is someone who needs very little introduction. Still, his status for the NBA Finals may be in question as he’s been dealing with an apparent hamstring injury that’s kept him sidelined since the second-round series against the Houston Rockets; Golden State has already confirmed he will not be ready in time for game one in Toronto.

At first, the media expected Durant’s injury to be much worse than it turned out to be, with diagnoses like an ACL tear being projected. However, recent reports have brought concern down to merely a hamstring injury which offers him a chance to return to action for the Warriors very soon.

But this only begs the question of if his return may in fact hinder Golden State’s chances considering the team is 31-1 in their last 32 games with Curry and without Durant. Still, Durant’s presence should without a doubt bolster his side’s attack and offer another set of clutch hands if a win is on the line in the late-game.

Regardless, these X-Factors’ potential storylines will make this 2019 NBA Finals one of the most highly anticipated championships in recent memory and will surely give basketball fans everywhere a spectacular show.

The Toronto Raptors just made the NBA Finals for the first time in their franchise’s history. This is fantastic for Raptor fans; however, they are going to have to beat the Golden State Warriors, the team competing in their fifth straight finals. Does Toronto have any chance of dethroning this star-studded superteam? Obviously guys like Kawhi Leonard and Steph Curry will have crucial roles in the outcome of this series, but for the Raptors, who else is going to step up to stop the Warriors? This best of seven will most likely come down to a few key players taking their game to that next level, on the NBA’s biggest stage.

The first potential X-Factor of this series is Kyle Lowry. The 12th year veteran out of Villanova took a lot of scrutiny early in these playoffs for his Game 1 performance versus the Orlando Magic. Since that game, he has been playing extremely efficient, averaging 14.7 points per game and with a 45% shooting percentage. Along with his scoring, Lowry has been facilitating the Raptors’ offense, averaging 6.4 assists per contest. Coming into this Finals, Lowry will face his toughest challenge yet, defending Steph Curry. Although the Warriors can score in a variety of ways, their offense is at its best when Curry is playing well. If Lowry can pester and harass Curry to force him out of the groove, then the Raptors could have a legitimate chance.

Toronto’s next potential game changer in this series, is Fred VanVleet. Since the birth of his second child on May 20, VanVleet has been shooting the lights out. In the 15 playoff games prior to his sons arrival, VanVleet was not turning heads, only averaging four points per game and hitting just 19.5% of three-point attempts. Since May 20, VanVleet has broken out, now averaging 16 points per game and has nailed 82.4% of three-point attempts. If Fred VanVleet can continue this hot shooting streak, the Raptors’ chances improve dramatically in this series.

Another key component to Toronto’s success is found within Pascal Siakam. Having to most likely matchup with Warriors forward, Kevin Durant, Siakam is going to have to be extremely active on the defensive end of the floor. Luckily for him, Siakam is 6’9’’, with a 7’3’’ wingspan and moves like a guard. Hopefully he can put all of his length and quickness to work when trying to contain Kevin Durant. In these playoffs, Siakam has been scoring very profficently, averaging 18.7 points per game on 45% shooting. The Raptors will need Siakam to continue to produce for them on both ends of the floor if they want any shot at winning.

Some athletes often think that seasons are won or lost based off of certain players within the team. This isn’t the case in the NBA Finals. Championship series are never won by one single player. Every year, the NBA Finals is won by the best team. With that, if the Toronto Raptors want any chance of hoisting the Larry O’Brien Trophy, it is going to take an overall collective effort. The starters all the way to the last guy on the bench are going to have to step up to put a stop to the Warriors’ reign.