The Daily Nexus
Science & Tech
Marine Species More Vulnerable to Global Warming Than Terrestrial Species
May 30, 2019 at 9:30 am by Jacqueline Wen

A new study published in the journal Nature reveals that marine species may be more susceptible to global warming effects — specifically increases in temperatures — than land creatures.

The international group of researchers, including Douglas McCauley from UC Santa Barbara, was interested in figuring out which parts of life on the planet would be most challenged by climate change. They performed a two-way comparison of species on land and species in the ocean to look at their vulnerability to warming temperatures. Specifically, they compared the sensitivity of ectotherms, or cold-blooded organisms, in the two major realms.

“All organisms, whether you’re warm-blooded or cold-blooded, have this range of temperatures that you can tolerate before your body starts to shut down and experience serious physiological stress — a lower bound and an upper bound. And so with warming, we’re mostly concerned about the upper bound because these temperatures are getting hotter and hotter,” McCauley, an associate professor in UCSB’s Department of Ecology, Evolution, and Marine Biology and its Marine Science Institute, said.

The main takeaway of the study is that ectotherms in the ocean are more likely to be vulnerable to thermal stress, he stated.

The scientists compiled the upper thermal limits for 406 total ectothermic species — 88 marine and 318 terrestrial — and assessed their position relative to the temperature threshold before they would begin to experience heat shock or heat stroke.

In addition, McCauley and his colleagues found that local species extinctions in the ocean occurred at twice the rate than those on land.

“We think that much of those local species extinctions in the ocean is being driven by marine animals that are right up against that ceiling or have crossed that ceiling, so either local species have gone extinct or have to, like a climate refugee, get out of there and go somewhere else,” he said.

Generally, land species are advantaged to cope with global warming because of microhabitat thermal refuges found within the natural variability on land, such as a burrow or shade under a tree, in which they can hide and cool off. In the ocean, ectotherms may face greater stress because of the fewer thermal refuges available there than on land. 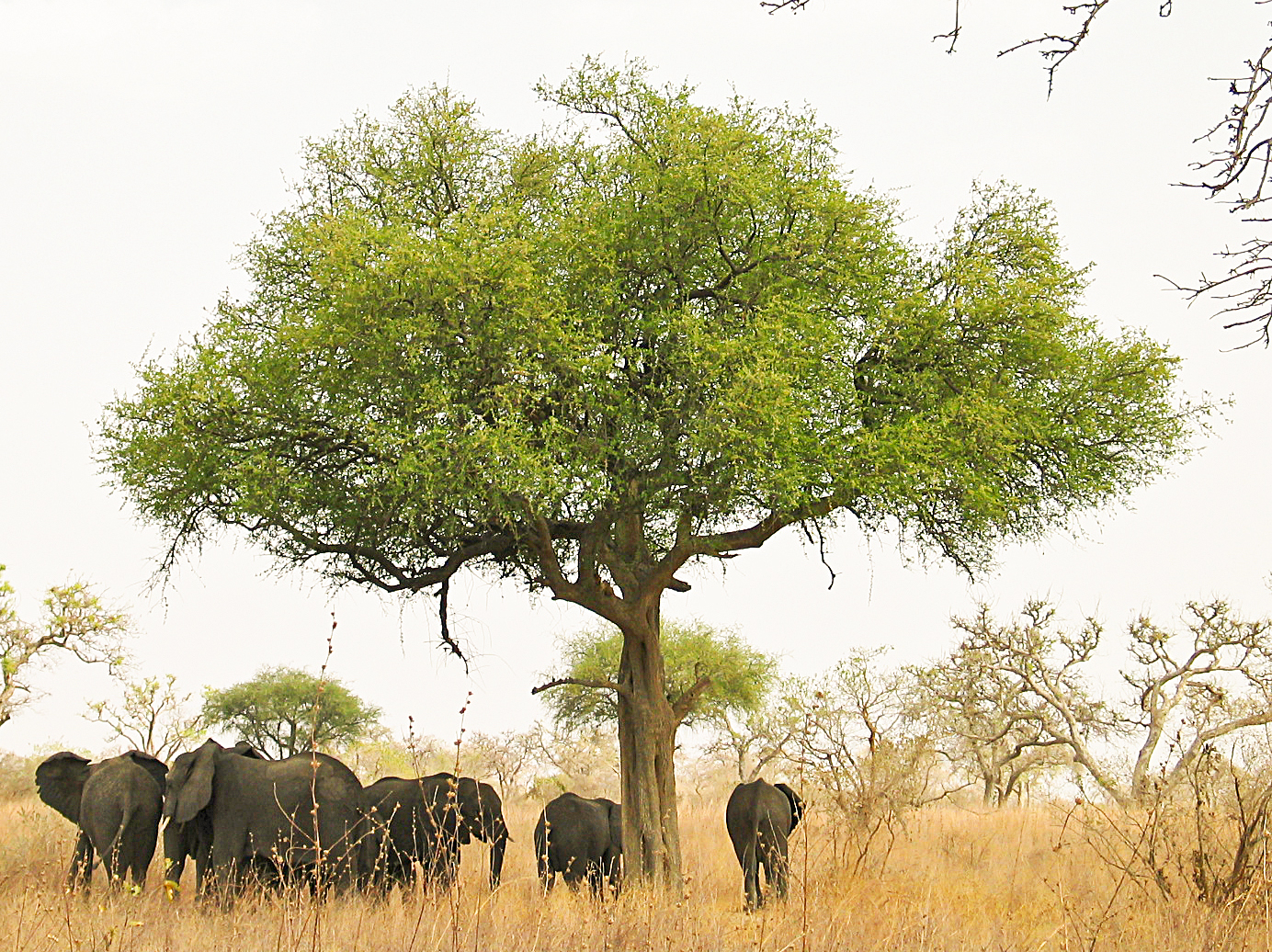 Terrestrial animals, such as these elephants, are advantaged with more thermal refuges on land, including the shade from a tree. Fewer thermal refuges underwater may be one reason why marine species are more vulnerable to warming temperatures than terrestrial ones. / Courtesy of Wikimedia Commons

Marine organisms may also have heightened vulnerability and sensitivity to thermal stress because they experience less thermal variability on average than do land creatures. During the transition from winter to summer or even across the duration of a day, a temperature logger tracks noticeably greater changes on land than in water.

“It’s possible, and I think there is promise for causality here, in that all that variation you see on land challenges organisms that live on land to expand this [thermal] window because they experience that range and those fluctuations in temperature across a day, across a year,” McCauley said. “Day to day, year to year, they have to figure out a way to physiologically deal with all that variability in temperature.”

Marine species haven’t needed to worry about temperature fluctuations as much, leaving them more disadvantaged to deal with the rapidly rising ocean temperatures.

“In the ocean, because there’s less of that flux, we challenge them to come up with physiological solutions when historically there hasn’t been a lot of changes in temperature. The oceans have been more static. That could give them less practice, if you will, with how to deal with temperature extremes in hotter directions, so they don’t know how to cope with it because they have no history with it.”

McCauley notes his team’s findings do not necessarily indicate that terrestrial animals are much better off than marine ones.

As for how to aid these vulnerable marine species, McCauley urges taking measures to help grow their populations, such as limiting fishing activity or creating protected areas. Larger populations have more genetic variability, which increases the probability of biologically inventing a solution for global warming.

“Climate change management is a bit like a triage exercise: The first thing you want to do — and the first thing that should be taken away from this — is that if there is so much more vulnerability in places as important as the ocean, we probably need to redouble our efforts to figure out how to take this vulnerability away, how to deal with global warming.”

While acknowledging that these are big challenges, McCauley says that having this understanding that these species are living precariously close to the upper bounds of their thermal thresholds, especially if they are profitable seafood species important for food, may “inspire global leaders that are already thinking of meeting these commitments to the Paris Agreement [which aims to have the global temperature rise for this century remain below two degrees Celsius above pre-industrial era levels] and … give them more incentive and more motivation to stick with those commitments.”

Beyond looking to mitigate the effects of global warming, the study’s results could help marine scientists like McCauley in trying to find solutions to relieve some of the stress marine animals face.

Species like salmon or tuna encounter many stressors that are more immediate, including overfishing or a lack of protected areas or plastic pollution, in addition to the ongoing thermal stressor.

“In some ways we can think of these cases — like a cod — like individuals that are admitted to a hospital where you have some chronic stress like cancer that is going to kill them, but then there are a lot of things like flu that is really making them sick here and now. If you can deal with some of the things that are making them sick in the here and now, maybe that gives them more energy and more capability to be resilient to deal with this longer-term stress,” McCauley said.

McCauley is next focusing on the finding about local species extinctions being twice as high in the ocean and to better quantify what loss of these species means to humans.

“It’s sort of obvious that if you lose a species in the ocean, you lose biodiversity and there may be other consequences, but it’s not as intuitively as clear what that means for the economics and health of people that depend on these species,” he said.

With his collaborators, McCauley is working to understand the implications of loss of species for populations who depend on those species, particularly in terms of food and nutrition.

“We’re trying to understand how important are those species to human nutrition so that when we see a species go missing in the ocean, we know exactly what that means for human health, which maybe gets people more motivated to care about some of those numbers and for us to know what those numbers of local species extinction loss would mean.”