The Daily Nexus
Opinion
How Defensive Architecture Hurts I.V.’s Houseless Population
May 30, 2019 at 8:35 am by Andrea Dager

Steps covered in spikes, corners of buildings blocked up, benches armed with dividers and appendages, if not removed altogether. These things are easy to miss if you’re a tourist, a student or anyone just casually passing through the city. For a large number of people, though, these seemingly minute architectural choices hinder their ability to live out their day-to-day lives — and send the message that certain individuals are not worthy of occupying particular spaces.

Dubbed  “defensive” or “hostile” architecture, these design choices “exclude, harm or otherwise hinder the freedom of a human being” and often “aim to remove a certain section of a community from a public space,” as described by hostiledesign.org. Targeted demographics often include the houseless , the mentally ill, the “transient” or anyone seen as not fitting into the surrounding population. 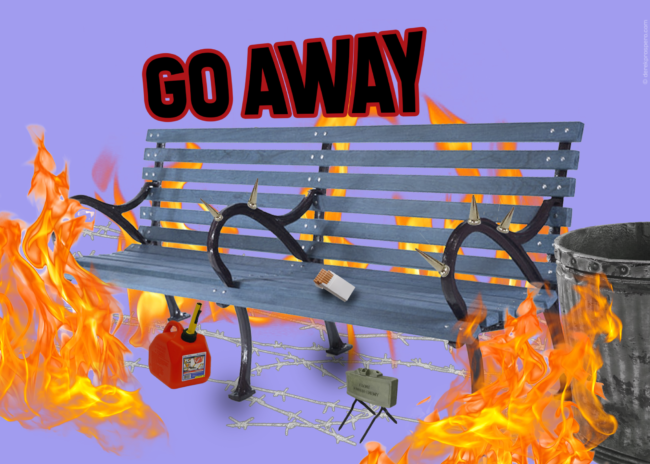 This shameful practice has come to my attention many times since moving to Santa Barbara, and it is particularly blatant on State Street, where there is a high concentration of houseless people.

Throughout the Santa Barbara area I had already witnessed many of the usual methods used to make sitting or resting either uncomfortable or impossible, but here in I.V. the city department took these measures one step further. Last month, they removed a large stone bench following reports that it was being  “monopolized” by particular individuals. While this may or may not count as defensive architecture and was ostensibly removed for the well-being of the community, the insidiousness of this action is hard to ignore.

The decision to remove the bench draws attention to the allotment (and restriction) of public space, as well as the enforced invisibility of certain demographics. If a supposed “monopoly” of the bench prompted its removal, then who is the bench being monopolized by? Are only students or the socioeconomically advantaged permitted to take up space? When is an area simply being used consistently, and when is it being “monopolized?”

In other words: Who gets to take up public space and why?

Surely it is no coincidence that the same people who frequently sit there are older men and women who also occasionally ask for a spare dollar and often make use of curbs and outdoor public spaces in I.V.

For years, the houseless population has comprised a substantial part of the Isla Vista community. A 2017 account from the Central Coast Collaborative on Homeless (C3H) found that I.V.’s houseless population consists of 26 locals. The Nexus reported that this figure matches the overall trend in recent years, indicating a decrease in houseless individuals living in I.V. It’s important to keep in mind that multiple houseless people either doubted this figure, or refuted it altogether, claiming the number to be far too low. Regardless, it is clear to anyone living in Isla Vista that there is an established community of adults who are houseless or facing severe economic and housing insecurity. This is not surprising considering Isla Vista’s staggering $416,700 median property value coupled with a poverty rate of 65.5%.  Regardless, it is these individuals who are targeted as well as most affected by actions such as the removal of communal seating areas. 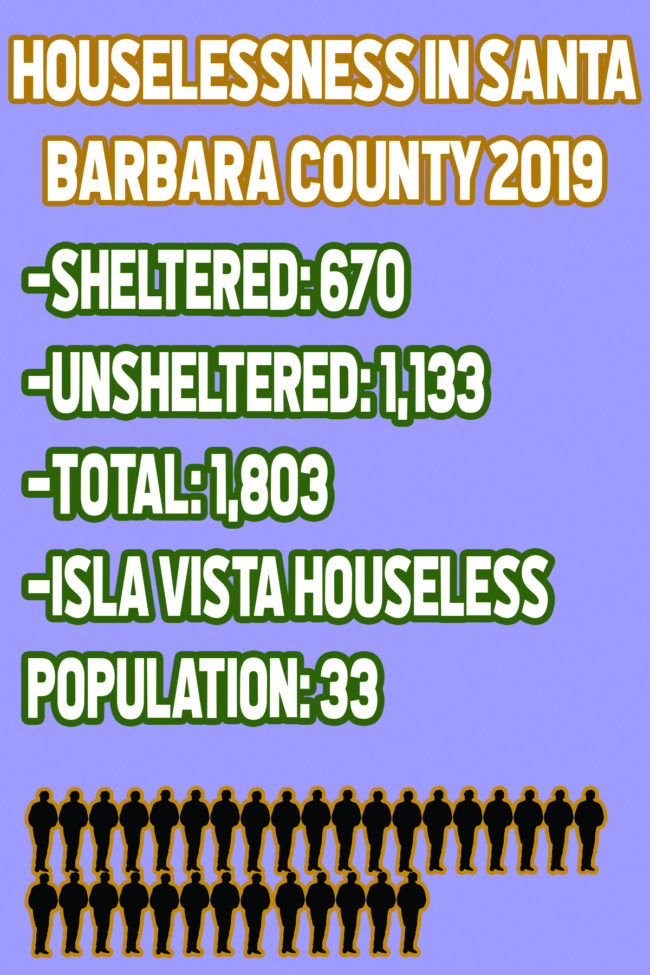 It might be easy to dismiss the removal of the Flintstone bench as an exceptional decision, but its place in the larger pattern of depriving the houseless of basic dignities cannot be ignored. Actions such as the removal of the bench reflect the larger trend of dividing communities (most evidently by class) while simultaneously removing spaces for people who very well may need them the most.

It should be noted that the bench will not be totally gone: The Daily Nexus reported the IVRPD plans to “reconstruct [the bench] into two, probably three separate smaller benches.” Breaking down the communal seating into multiple smaller benches means that the seating areas will be smaller, therefore prohibiting people from sitting or resting for long periods of time. It is no surprise then that the people most negatively affected by defensive architecture in Isla Vista are those who are most socially and economically vulnerable.

Covering the ground with spikes or placing a divider on a bench doesn’t improve the life circumstances of the people who use those spaces; it only deprives them of a space to exist. Cities have been and continue to be hard at work — not to provide more resources for these communities, but rather to transform socioeconomic barriers into physical ones. One might be tempted to dismiss the removal of the bench and other aspects of defensive architecture, as it is easy to dismiss things that don’t affect ourselves personally. Still, this phenomenon reflects the disturbing notion that people don’t want to help other people. People don’t care if others have nowhere else to gather, sit, sleep or even use the bathroom. They just don’t want to see them.

While the removal of the Flinstone bench is indicative of larger negative trends, this does not discount the good that has been done in recent years in the Santa Barbara and Isla Vista communities. For example, cities such as Santa Barbara are alloting increased funds to aid the houseless population, although problems still arise with how this money is being allocated. Oftentimes, money is spent “dealing with” houselessness, instead of solving issues or helping houseless people. As reported by the Santa Barbara Independent, $5 million are spent annually addressing the ‘practical’ repercussions of houselessness, as opposed to the $1 million used to actually remedy the issue itself. This proportion should be flipped: Rather than spending vast amounts of money on after effects such as cleanup, camp sweep-outs and service calls, these resources and time should be aimed at more reparative efforts, like increasing available housing and support programs.

Who gets to take up public space and why?

Although the city of Santa Barbara continuously prioritizes the ‘established’ community more than that of the houseless, Isla Vista has made hopeful steps in a more productive and more compassionate direction. A positive local development occurred in 2014 with the construction of  Isla Vista houseless shelter, the Pescadero Lofts. Since opening, the lofts have remained at full capacity, and the number of people living on the streets of I.V. decreased 44% from the previous year.

Although hostile urban design is something I noticed in the past, it took seeing the Flinstone bench demolished and carried off for me to sit down and write this article. I hope those who are, like me, privileged enough to ignore these realities take a step back and notice the ways the public landscape influences real lives. I urge cities to take the more compassionate, humane approach and to stop prioritizing the needs of the city over the needs of the person. As the general public we may not have control over the way our cities are planned, covered and designed. At the same time, we can refute with our own voices the insidious tactics of defensive architecture, increased policing or even the simple removal of a bench and demand that public spaces remain public.

Andrea Dager
Andrea Dager is a second year English and Sociology double major aspiring to one day have the ability to meet a deadline.

Am I the only one who does not give a shit about lack of comfortable places for bums to take naps in IV? I mean seriously!!??

yes, yes you are

No,no he/she is not!

This community built a housing complex for homeless people–meaning they can adjourn to an apartment instead of scrounging for half consumed coffees in the trash can outside Starbucks. Residents of IV pay for that facility. If you really want to explore “defensive” architecture why not look beyond a park bench and examine the building codes in IV–there is a reason nothing new, bigger, or better ever gets built–it is called “two parking spaces per bedroom fifty feet from the curb or center of road–retroactive.” Now THAT is hostile urban design. Oh, and your $416K number is nonsensical. Houses here go… Read more »