The Daily Nexus
Opinion
Why Does Birth Control Always Feel Like a Battlefield?
May 28, 2019 at 2:57 am by Cardi Bradshaw

Here’s an experiment: Ask your male-identifying friend, hookup, or partner, “If there was safe and affordable male birth control, would you take it?”

Here are some of the responses that my friends and I got:

“Nah, I would forget to take it so there’s no point.” 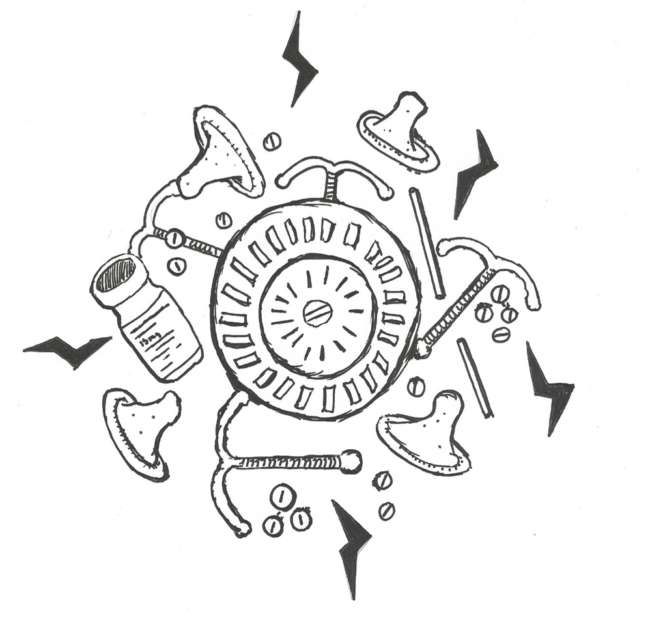 Many UCSB students rely on the pull-out method or traditional birth control, like the pill, IUD (intrauterine device), implant, etc., when they have sex (neither of these methods protect against the STDs that are literally rampant in Isla Vista, by the way). Of course there are those educated gems who do rely on condoms for their sexual activities (and to those heroes, we thank you). But when it comes to pregnancy, cisgender men don’t worry about contraceptives the same way that people who can get pregnant do, and it’s not their fault. But do they know what we’re up against?

There are many forms of birth control and because it’s no longer a taboo conversation hiding in your doctor’s contraceptive pamphlet, let’s talk about it!

Here are the testimonies of my fellow Gaucho comrades, our frontline contraceptive soldiers — we honor your legacy:

“I went on birth control when I was 16. Within five minutes of my first pill I started bleeding, and it went on for weeks. I decided to switch to an IUD , which got dislodged, after a year of consistent bleeding. So now I’m back on the pill with the original problems I had. People say to just stick to condoms, but without the pill I still get my period for two weeks every month and major PMS. Also, condoms aren’t as reliable and not always available on hand. I didn’t want the [birth control] shot because it would make me gain weight, and the ring is difficult to manage. I hate it all.”

“If men could get pregnant, birth control would be as available as your nearest Starbucks.”

“I was 17 and was prescribed the lowest dosage of estrogen to regulate my period. Within the first two weeks, I was crying almost every day for no reason. By the third week my boobs had went from a B to a D and hurt like hell. I felt angry and anxious, and by the fourth week I thought I was going crazy. When I went back to CVS to pick up the next month’s prescription, the pharmacist apologized for ‘giving me the wrong prescription last month’… Instead of getting my low-estrogen pill that my doctor prescribed me, I was given a form that had weekly increases in estrogen and literally wrecked my physical and mental state. This was my introduction to birth control.”

“I got the implant last year when I was 19. It made me so depressed for no reason. I was extremely unhappy and I didn’t know why. I actually had to take my Spring Quarter off and go home because of how depressed I was. As soon as I got the implant removed I was fine … same thing happened to my best friend who also had the implant.”

Birth control is important, and it is a privilege. According to a National Center for Health Statistics study, “approximately 65% of women are using some type of contraceptive method.”

More than half of the female-identifying population is on some form of birth control. People who bear the burden of childbearing also bear the burden of preventing that. We can’t blame the people we know for not having to deal with getting pregnant. But considering the gender roles of contraception, my friend’s dad put it best: “If [cis] men could get pregnant, birth control would be as available as your nearest Starbucks.”

Cardi Bradshaw wants male Gauchos to consider the trials and tribulations of birth control and to buy more condoms.