Last month, I was biking in front of the HSSB, panting as I heard the bell ring for my 11 a.m. class. I was late again, of course. I was trying to pass a sad and slow beach cruiser when I noticed a speedy road bike attempting to do the very same. He went to shoot the gap between me and the cruiser, and in doing so, pushed me into the oncoming bike traffic. In what felt like a single heartbeat, I was on the floor, my bike was on top of me, my phone was thrown across the path and my legs were covered in blood. I was left with was a splitting pain between my ears. At the moment, I had no idea why. Within seconds, I was surrounded by five kind strangers who were eager to help me get up and out of harm’s way.

I hadn’t realized yet just how hurt I was. I sat under a tree with my face in my hands, utterly embarrassed that everyone had just seen me wipe out. A nice man asked if I was okay since he apparently saw me hit my head on the ground. I tried telling him that I didn’t hit my head at all. He pressed on my temple to show me I was wrong. That’s when I knew I needed to get some real help. 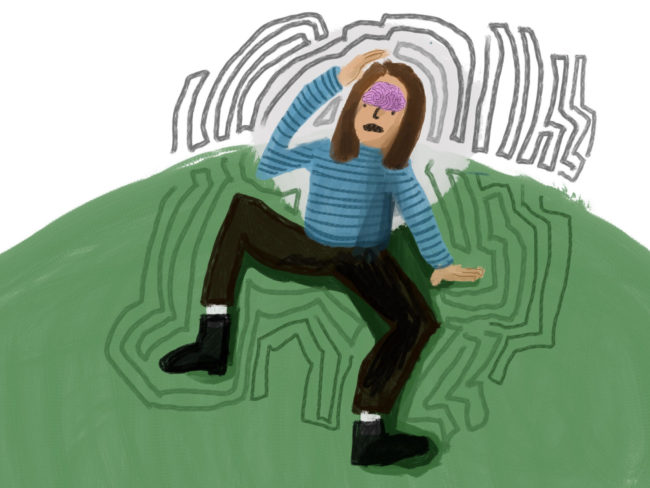 I limped my way over to Student Health, dragging my death trap of a bicycle behind me. The doctor sat me down to ask a series of questions. I was getting most things correct — my name, my birthday, etc. But when she asked me the date, I replied, “Well, it’s January 4th, of course.” Her face dropped. It was April 9th.

After I was diagnosed with a concussion, I went home, called my mom and cried. This was the second brain injury I received at UCSB and I was most likely going to miss the rest of the soccer season. The way I saw it, my life was over. The thing about concussions is that you can only really understand what it feels like if you’ve had one before. Empathy is not possible. It is not just a bad headache that won’t go away.

Depending on who you are and which part of the brain you have injured, your symptoms will be vastly different. People who injure their prefrontal lobe are likely to experience a personality shift as well as disassociation with the mind and body. When I fell off my bike, I hit my left temple on the pavement, inflaming my temporal lobe. This segment of the brain controls and regulates your emotions, language comprehension and auditory perception. Because of this, I was in a bitchy mood, sucked in Spanish class and had the hearing capacity of my 85-year-old grandpa. That month was devastating — and yet, thanks to the fog, feels as though it never happened.

When my friends and family ask what a concussion feels like, I freeze. There are no words with which you can articulate it. You just hope and pray they never have to experience it firsthand. The best way to describe the period of concussion is like you’re living in a fog. This fog is plagued by clouds of migraines, introspective thoughts and fears that you will never make it out. Sadly, some people do not recover from a concussion, especially if they suffer three or more in their pre-adult lives. I was one of the lucky ones.  My teammate Kayla has received five major concussions and seriously believes she is a different person because of them.

It is recognizing this shift in personality that causes people to become depressed. They daydream about how they used to act, think, speak and even walk. Day by day, their past selves becomes more and more a stranger to them. I myself felt this depression. Even though this was difficult to go through, the fog had its upsides as well. I even grew to know my best friend better.

The thing about concussions is that you can only really understand what it feels like if you’ve had one before.

My best friend was diagnosed with clinical depression when she was 12 years old. Every year, her condition became more and more apparent. She saw a therapist twice a week and took three forms of medication daily. As her best friend, I was there for her whenever she needed me — whether this meant providing her a home to escape to, a shoulder to cry on or even an ear when she felt she could not trust her doctor. Slowly throughout the course of high school, I became her therapist. The pay wasn’t great, but it felt nice to help her out.

I always wished I could do more. I could only sympathize with what she was going through. I had never been depressed before, so of course, I couldn’t really know what was going on in her head. At lunch, I would research WebMD articles on depression and anxiety, hoping to get her answers and hoping to be a better therapist. I now realize this issue applies to concussions as well. You don’t really know what people are going through unless you’ve been there yourself.

I continued to be there for Bella, even when we left to attend different universities. I became a long-distance therapist. We would FaceTime roughly five times a week, hoping to ease her nerves as she settled into her new life at the University of Colorado, Boulder. For the first time, we were in different states. For the first time, a phone call was my only way to comfort her. For the first time, I could not be there for her to the best of my ability. This ate at me. I was constantly worried about her. If I had not heard from her in two days, I knew something was wrong. She needed her therapist, but I was off dancing down Del Playa and tanning on the Anacapa lawn. I felt guilty. I had it so easy.

My world came to a halt when I got my concussion. I was unable to do anything on my own for over a month and my GPA suffered tremendously. I became socially awkward, I lost my sense of adventure, I became introverted and I even forgot what it felt like to feel excited. My world was gray. I learned to exist, rather than to live. But above all else, I began to understand what Bella was going through. For the first time, I did not feel like her therapist. Finally, I could hear her out and understand it completely. For years she had been trying to help me see what it was like to live in a world of gray. Now I knew. So yeah, getting pushed off by bike really sucked — but it allowed me to see my friend and her condition in a whole new light. In a weird way, it felt like we were depressed together.

At some point in our lives, we are bound to feel trapped by the gray and to feel lost in amongst the dreary clouds. I would not have gotten through my concussion if it weren’t for the love and support of those around me. It just goes to show that even on the darkest of days, someone else’s light can burn through your clouds, brighten the gray and clear your fog.

Hannah Peck encourages Gauchos to care for their concussed friends.