The Daily Nexus
Opinion
A Call To Diversify Our Crazies
May 24, 2019 at 12:00 pm by Raveen Sivashanker

The marijuana-smoking, alcohol-drinking, premaritally-fornicating and illegally-Birding UC Santa Barbara populace was mercifully blessed by the annual bombastic visit of itinerant preacher and self-styled “Soul Doctor” Jed Smock Jr. back in March of this year. What is unquestionable is the stage presence of this man and his astonishing five-human pitching rotation of hardcore Jesus fandom, despite being armed only with an audience of nihilistic, short attention-spanned college students, and deep reserves of their own willful hate and unresolved guilt and a corresponding “Hell is Hot Don’t Be a Thot” poster. This troupe of doom-monger acolytes doctored fallen campus souls into resounding affirmations of identity, resentful declarations of equality, passive and amused observation, scoffing and/or oblivious passing-by; but, shockingly, there were very few to no conversions into this particular sect of craziness.

But what Jed was straining so hard to teach us was that we have all alike been tried, convicted and forsaken — and, indeed, by the end of winter finals, many of us had gotten around to believing it. But the more fundamental questions remain: by whom, and for what? 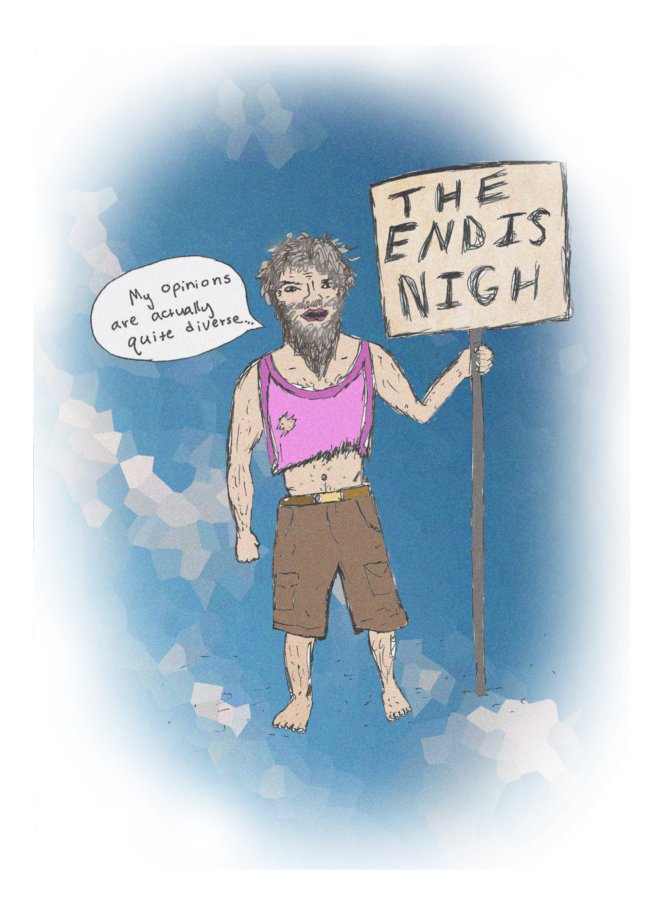 Until that fateful day when we forcibly find out — and are simultaneously found out — we will have to make do with fleeting, personal answers. And different people have different answers (damnation being imposed by varying brands and numbers of gods or genres of non-gods, as punishment for choosing the wrong kind of sentient creature to eat, murder or have sex with); on macro scales, different religions and cultures teach different lessons. But, perhaps most importantly, different crazy people exhort different crazy sermons.

Maybe the greatest accomplishment of this new internet-addled cosmopolitan world of ours — at least something to show for the pain of centuries of imperialist oppression, the globalizing international order, the delocalization of social meaning — is the fantastic volume of craziness that a global citizen has at least theoretical access to. Nutjob nationalisms, kooky conspiracies — a buffet of battiness. In short, there is no excuse for a modern university student not to be exposed to our world’s unbelievable, beautiful diversity of foolishness.

And yet, at the UCSB campus, we are only ever offered the same old mediocre, Jesus-themed religious nationalism, the sex-and-damnation gimmick — very much the staple food of American craziness. But where is the lunacy variation? The different flavors of  derangement? There are so many great, different religious and secular literatures to grotesquely misread, and so why do we, as students at a reputed research university, have to be satisfied with stupid interpretations of the same old book?

What we need is greater diversity in our campus crazies.

We already see the resultant stagnation in university life, the listlessness of fringe intellectualism that could otherwise thrive in a land of disproportionately stoned young adults. It is clear that the visits of even the most enthusiastic campus evangelists will not revive the strain of subversive feeling that enspirits the academia lifeblood; they also will no longer inspire the same impassioned defenses of normative and non-conforming campus lifestyles alike. It is clear that those brave souls who rise to debate these preachers no longer feel the fire that once fueled their disregard for typical standards of politeness; it is visible in their eyes, the realization that some conflicts are unresolvable because they are necessary, that no variety or quantity of lipstick will make this particular chauvinist pig presentable. The words remain loud, but the feeling has disappeared. We students and our quarterly visiting fundamentalist Christian keepers are like an old, unhappily married couple — even the bickering has become stale.

Part of this is due to the inherent staleness of the American brand of fundamentalist Christianity itself: In the supposed marketplace of ideas, no one is looking for a product more than 100 years old, with no demand and no untapped markets and no shiny new packaging, because calling passing students “whores” is not enough to be subversive (it really is the opposite). Christian believers might experience some frustration at what they might consider a disproportionately represented strain of their religion, but frustration is all that it is, and all that it can be. For although it is upsetting — the misogyny, the transphobia and homophobia, the occasional colonialist leanings — none of it should really be shocking. Ex-Christian atheists and agnostics might watch from the back of the crowd, crossing their arms and leaning back and smirking, relishing the former struggle to overcome their personal belief in the demon and anti-demon; but ultimately they know the battle has been won, and there is no new knowledge or pleasure gained.

Here is the other aspect of the discord-stagnation: While trying to employ some element of shock, the preachers nevertheless rely on their ideology to carry a considerable amount of cultural and historical weight. And on a relatively diverse campus populated in large part by students coming from non-Christian backgrounds or other countries, for many, evangelist-inspired Jesus unease is, at worst, a latent issue. As an ex-believing Hindu myself, having overcome an infinitely larger number of gods than just about any other collection of formerly religious atheists, the exercise of disbelief has become routine. These two new deities, Biblical Jesus and Jed Smock — who I imagine mythologically sports three horns, wags a scaly tail and spouts constant nonsense from all seven of his face holes — are a miniscule percentage of the beings I choose not to believe in.

Our modes of relating to the intermittently present campus population of crazy people have turned rote and predictable, and there is no more novelty, or else there was no salient history in the first place. What we need is greater diversity in our campus crazies. There may or may not be a subset of students who feel enriched and enlivened by the periodic high-profile Fundamentalist Christian preacher visits; but what is indisputable to me is the potential collective enrichment we all stand to gain from witnessing and engaging with a wider range of crazy people.

Regardless, the present state is abysmal: It is absurd that a university that prides itself on its student body’s diversity — in custom, culture, religion, skin and other assorted ideologies — can only manage to offer one flavor of craziness.

Even if we’re restricting ourselves to people who focus their craziness on religion, the benefits are clear. The spiritually-minded folks on campus might learn of new, better ways to retrospectively revise their own faiths, to twist them for purposes of good. The un-religious will find new inspiration and life for their un-faith.The non-Christian especially may find the chance to find genres of craziness that they are more accustomed to, that they possess the proper cultural context to appreciate. The pathological debaters would gain experience with getting angry at a wider range of crazy people. Women, LGBTQ+ folk and the ancestrally colonized (or some combination of these three things) would hopefully find varieties of craziness that do not funnel all their hatred toward them. We all, indeed, would benefit from finding new kinds of focused hate — or, better yet, craziness that is not based on hate at all, but on entirely unreasonable loves.

Regardless, the present state is abysmal: It is absurd that a university that prides itself on its student body’s diversity — in custom, culture, religion, skin and other assorted ideologies — can only manage to offer one flavor of craziness. It is absurd that a prestigious university, which has shown the capability and willingness to bring great minds to campus frequently, should be persistently incapable of similarly recruiting the top global talent in high-grade lunacy and creative stupidity. We have a demand here at UCSB, and the world is overflowing with supply. We have the tools to create a truly vibrant marketplace of crazy ideas, to possess both the Great Library of Human Thought and, just as fantastic, just as fascinating, The Dumpster.

Raveen Sivashanker wants to hear fresh, diverse and eerie voices of craziness that DO NOT reproduce socio-cultural structures of violence and domination.

Stopped reading a quarter in. Too many loaded words, lacking substance.