The Daily Nexus
News
More than a Year After Parkland, David Hogg Urges UCSB Students To Continue Fight for Gun Control
May 23, 2019 at 12:05 am by Katherine Swartz

David Hogg, gun reform activist and co-founder of the March for Our Lives movement, spoke at Campbell Hall on Tuesday evening about his experience as a school shooting survivor and his role in the national conversation over gun reform in the past year. 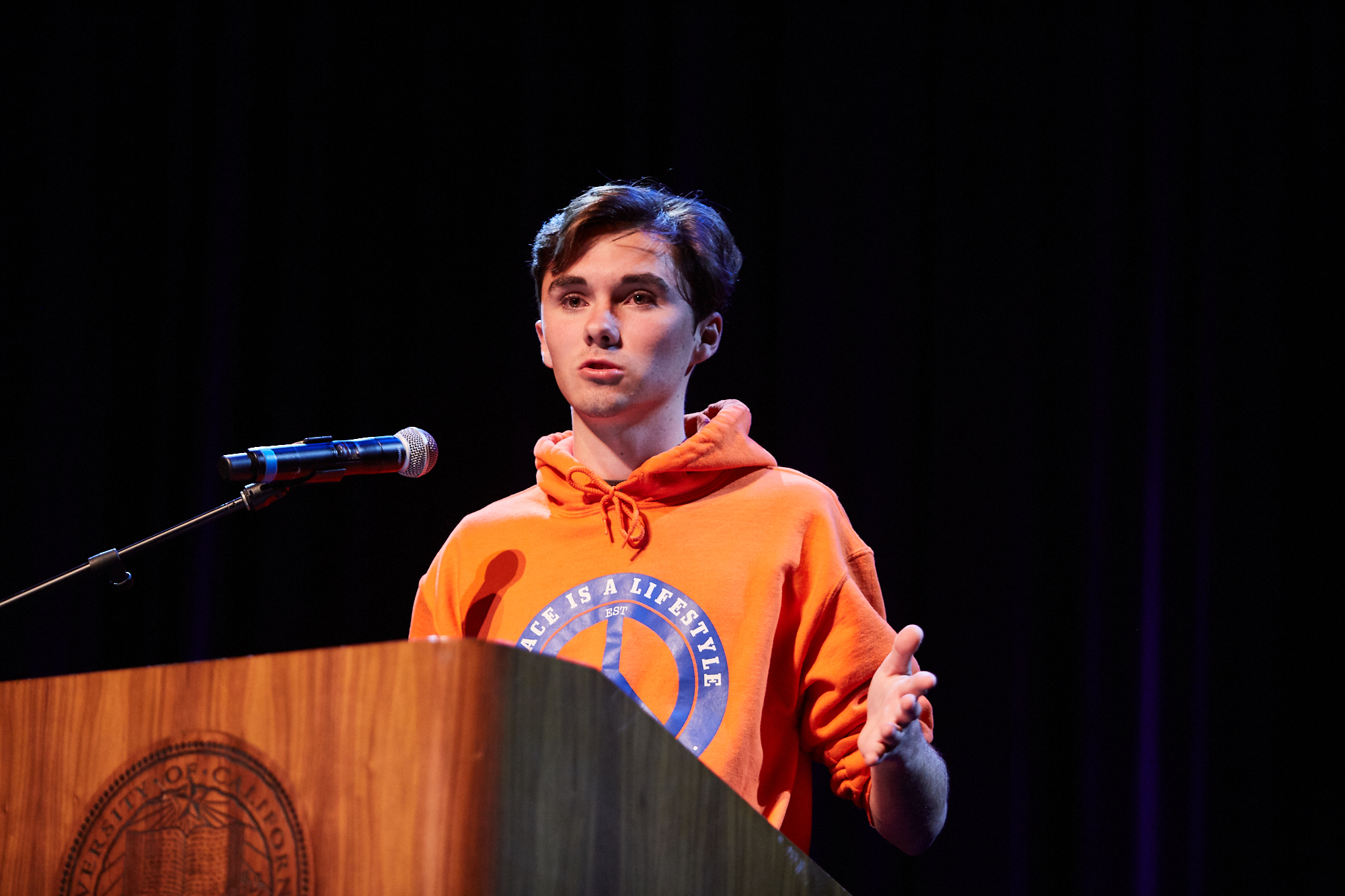 Hogg is currently taking a gap year from college. He will enter college in fall 2019 with the class of 2023. Riley Esguerra / Daily Nexus

As a survivor of the Marjory Stoneman Douglas High School shooting on Feb. 14, 2018 in Parkland, Fla., Hogg has been in the national spotlight for the past year as a vocal advocate for gun control legislation and voter registration.

Hogg’s talk is part of a greater conversation on campus this week around gun violence in light of the fifth anniversary of the Isla Vista shooting, something Hogg briefly referenced in the beginning of his speech.

“I’m not going to do a moment of silence because, to be frank, I fucking hate moments of silence,” Hogg said.

“I feel like we always hear in Congress, our politicians go, ‘Let’s just not talk about this. Let’s be quiet’… if we go out and speak about how to actually stop shootings from happening, that’s being too political because it stops the people in Congress that make money off of gun violence.”

Hogg’s speech centered on his background as an activist over the past year after being thrust into the national conversation around gun violence. He also spoke on a variety of political issues during his speech, including mass incarceration, immigration and U.S. foreign policy.

For Hogg, guns were always a part of his life; his father, an FBI agent, instilled in him a “respect” for gun ownership. He clarified to the audience that he is not anti-Second Amendment but feels the National Rifle Association (NRA) does not look out for gun owners like Hogg’s father.

“It’s almost like they don’t actually care about anyone’s safety, not even people they claim to protect,” Hogg said.

Hogg spoke in unexpectedly candid detail about his experience during the Parkland shooting, describing the confusion of himself and his fellow classmates.

“Everybody’s freaking out. There’s people having panic attacks. There is an incredible amount of dread. It’s dark because we don’t want [the] shooter to see us. Everybody’s trying to be quiet while also telling all their parents everything that they want to say before they die,” Hogg said.

Even when speaking about the shooting, Hogg’s message was highly political. As he waited in a classroom, unaware of the shooter’s location, he said he pulled out his camera and interviewed students to send a message of gun reform to national politicians.

“If we died in that classroom, hopefully our voices would carry on and create some kind of change in a place that clearly fucking needs it.”

On the same day of the shooting after Hogg was cleared to evacuate the school, he began talking to media outlets at the scene and organizing what would become March for Our Lives.

“I needed to speak for those that couldn’t speak at the time … [I wanted] what happened at our school to create some change. I wanted our school [to] not just be another name on a list of schools that have gone through school shootings, but a name that people remember. Not something where people feel pity for the school or anything like that, but feel empowered and know that those kids did something,” Hogg said.

Hogg began to realize the greater power of the March for Our Lives movement when over a million people marched around the world on March 24, 2018.

“One thing I will always remember as well is the mirage of heat that came off the crowd in Washington DC, on a pretty relatively cold March day,” Hogg said.

The next step for the March for Our Lives movement was Road to Change, a cross-country bus trip to speak with other activists and register young people to vote. The trip was inspired by the Freedom Riders of the civil rights movement.

“What Parkland went through as a predominantly white community… we understood that we didn’t live through everyday acts of gun violence. If we actually do want to work [on] significantly reducing gun violence … we had to work with every community and not speak for anybody else and bring people on the bus with us from around the country,” Hogg said.

When speaking with gun reform activists in East Oakland, Hogg realized the normalcy of gun violence in other communities when a shooting happened a few blocks away during the meeting.

“I hear a pop, and I looked at them, and they’re like, ‘Oh, that was a car backfiring,’ and then we hear several more, and it was a shooting right next to us at the same time. That doesn’t make it on the news because it’s not a mass shooting and doesn’t get treated nearly the same way, which is wrong and shouldn’t happen,” Hogg said.

On Road to Change, Hogg also encountered people across the country who are against gun control legislation and challenged the notion that gun ownership equates to freedom during his speech.

Looking back on his work in the past year as a leader of March for Our Lives, Hogg focused on voter registration in the 2018 elections and legislative victories across the country.

“By one year after the shooting … we had gotten 67 gun laws passed at the state level, we had gone to competitive congressional districts around the country and met amazing young people around the country that had experienced gun violence and [used] that trauma not as a dividing factor as the people in power want us to use it, but as a uniting factor to make sure that nobody else has to live through it ever again in any zip code, in any community.”

First-year biology major Lisa Liu, who attended Hogg’s talk on Tuesday, said she has a personal connection to the March for Our Lives movement that drew her to the talk.

“When I was a senior in high school, that’s when the shooting happened at Parkland, and me and a few students put on a march for our own school,” Liu said. “I just wanted to learn more about his story because it impacted our community, and I’m from Thousand Oaks, so there’s currently a history of gun violence,” referencing the recent Borderline Bar & Grill shooting in Thousand Oaks.

At the end of his talk, Hogg challenged the audience to take his story and create political change in Santa Barbara.

“If this conversation dies in this room, I have failed.”

[Editor’s Note]: Before speaking to UC Santa Barbara in Campbell Hall, Hogg sat down with Daily Nexus Asst. News Editor Katherine Swartz to discuss his work this past year, his thoughts on how young people should get involved in their communities and what comes next for him. The Q&A can be found here.

I admire this youngster for taking a stand, but seriously… the only thing that will stop these active shooter situations is full scale confiscation and banning guns outright. Sure, you can ban semi-automatic rifles, but the Virginia Tech shooter took out over 20 people with handguns – a shitty Walther .22 and a 9mm (Glock I think). Full scale confiscation will never happen in the USA, so talking about gun control is pretty much pointless. You can pass more laws restricting gun ownership, but these laws will never stop a nut from going on a shooting spree if he/she is… Read more »